In the Spring of 1757, during the general advance of the Prussian columns on Prague, FZM Königsegg attempted to defeat Bevern's column at it crossed the Neisse (present-day Lužická Nisa River). On Wednesday April 20, Königsegg chose an excellent position at or round Reichenberg (present-day Liberec), one march from Zittau and one from Liebenau (present-day Hodkovice nad Mohelkou). Reichenberg was nestled among hills in the Neisse Valley and offered fine capabilities. There was especially an excellent hollow on the left or western bank of Neisse River, across from Reichenberg. This hollow was backed by woody hills, with brooks and woods all around. Königsegg posted his army in this hollow, planting batteries and felling abatis.

Bevern's column came upon Königsegg who was manoeuvring ahead in superior force (26,000 men). Königsegg had with him Maquire who came from the right to cut off a large Prussian convoy on its way to join Bevern at Zittau. Königsegg had not completed concentration of his corps at Reichenberg but could field some 16,000 men. Bevern for his part had to send a strong detachment against Maquire, retaining only 15 battalions and 20 squadrons with him. Bevern approached Reichenberg in the evening of April 20 and found his way barred and had to take camp with the Neisse in front of him. 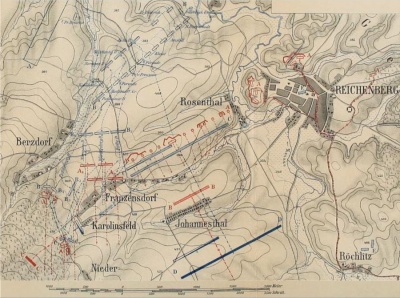 The town of Reichenberg lay on the right bank of the Neisse. The foothills of the Isergebirge (present-day Jizera Mountains) almost reach the river while, on the left bank, the wooded slopes of the Jeschkengebirge are not more than 3 km from the river. Thus to the west of Reichenberg, the valley widens around a meander of the Neisse and is criss-crossed by several streams flowing into the river. The villages of Berzdorf (present-day Ostašov, part of Liberec), Franzensdorf (present-day Františkov, part of Liberec), Johannesthal (present-day Janův Důl) and Eichicht (present-day Doubí, part of Liberec) are scattered on the left bank of the river in this part of the valley. These villages were close enough to each other to completely cover the approaches of Reichenberg from this side of the river. It was also difficult to use the heights on the right bank to fire on positions on the opposite bank. Only the heights immediately to the north and northwest of Reichenberg in the direction of Friedland (present-day Frýdlant) offered good positions to fire on the Austrian positions. However, Major-General Lacy had built strong entrenchments on these heights during the previous winter when he had also surrounded the unwalled city with a palisade.

The Austrians were deployed along a ridgeline dropping away to the Neisse Valley. On the left bank, entrenchments defended the area between the Berzdorfer Stream and Franzensdorfer Stream. There was still a space of some 1,000 m. without entrenchment between the Austrian left wing and the outskirts of the forest but it was under the flanking fire of two redoubts. In fact these positions had been reinforced with 3 batteries of artillery and redoubts. The redoubts were further covered by abatis, palisades and wolf-pits. The woods were dense except for the "Franzensthaler Grund" which can be considered as light woods. The stream along the "Berzdorfer Grund" had marshy banks.

On April 21, Bevern passed the Neisse at break of day. During the passage of the river, he reconnoitred the Austrian positions, obtaining sufficient information to be convinced that a large Austrian force was entrenched nearby. He immediately instructed Lieutenant-Colonel Warnery to protect the baggage at Kratzau (present-day Chrastava) with I./Münchow Fusiliers, 5 sqns of Puttkamer Hussars, 150 dragoons and the commandeered foot in case that the Austrian force posted at Gabel would march against them.

Even though Maquire's Corps threatened the rear of his army, Bevern resolved to advance against Reichenberg. However, he left 2 other bns to guard the baggage (Grenadier Battalion Waldau and II./Münchow Fusiliers) while Jung Braunschweig Fusiliers was still further away escorting the provision wagons.

Bevern formed his army in order of battle between Berzdorf and the Neisse. Meanwhile, Lacy, another of Königsegg's subordinates, came from the left with Königsegg, intending to offer battle. Bevern soon realized that some Austrian infantry was most probably hidden in the woods at the foot of the mountain of Jeschken and that he was about to be attacked on his left. He instructed the battalions of his right wing to expel the Grenzer light troops from the woods on their right flank.

The marshy banks of the Berzdorfer Stream put a halt to Bevern's advance and he had to throw two bridges across this stream to allow his troops to resume their advance.

Prinz Heinrich von Preußen Fusiliers, which had been brought forward from the second line, took position on both sides of each bridge with six 12-pdr guns.

At 7:00 a.m., the two wings of Bevern's army began to cross the bridges over the Berzdorfer Stream under the protection of Prinz Heinrich von Preußen Fusiliers. They immediately reformed lines on the other side of the stream and Prinz Heinrich von Preußen Fusiliers rejoined the second line. They then resume their advance under the cover of pieces of heavy and regimental artillery posted on the right bank of the Neisse.

The fire of the Prussian artillery forced the Austrian cavalry, which was initially deployed near Berzdorf, to take refuge behind the Austrian infantry of the left flank, posted in the woods.

Bevern then gave orders to Grenadier Battalion Kahlden and Grenadier Battalion Möllendorf to drive back the Austrians occupying the advanced abatis in the woods. He also ordered Prinz von Preußen Infantry to stand in support of this assault. These battalions resolutely attacked these abatis at the point of the bayonet without firing a shot. The Austrians, after a general discharge, drew back behind their second line of abatis.

During the ensuing pursuit, Normann Dragoons, who were deployed on the right wing, came under fire of the Hungarian Haller Infantry occupying the southernmost barricade. Normann Dragoons suffered considerable loss and were thrown into disorder.

At about the same time, the Austrian cavalry rallied, made front and engaged the pursuing Prussian dragoons, driving them back.

The 5 sqns of Puttkamer Hussars, concealed in a hollow up to this moment, suddenly came upon the Austrian flank saving the situation for the Prussians and allowing the Prussian dragoons to rally and to attack the Austrian cavalry once more, putting it totally to flight. Herzog von Württemberg Dragoons pursued the Austrians up to Franzensdorf.

Meanwhile, Bevern had moved II./Prinz Heinrich von Preußen Fusiliers from the second line to the right wing of the first line and had advanced with his infantry against the entrenchments of the left bank. During this advance, his left wing suffered some losses from the Austrian artillery posted on the heights of the right bank. His centre and his right wing were protected by the terrain.

Once beyond Franzensdorf, the Austrian infantry tried to make a stand. However, Königsegg realised that any further advance of the Prussians on the left bank could seriously endanger his main force posted on the right bank. He decided to break combat and to evacuate Reichenberg.

Bevern brought his cavalry back to the second line, sending I./Prinz Heinrich von Preußen Fusiliers to join the first line. He then sent his infantry forward, out of the conquered entrenchments, against the retreating Austrian foot. Bevern also detached Grenadier Battalion Kahlden, Grenadier Battalion Möllendorf, I./Kleist Infantry and II./Prinz Heinrich von Preußen Fusiliers against the southernmost barricade to prevent Haller Infantry from attacking his right wing in flank.

Königsegg assembled his troops retreating on both banks of the Neisse behind the Dörfelbach and then retired southwards in good order by Langenbruck (present-day Dlouhý Most) to Liebenau under the protection of his rearguard under Lacy.

By 11:00 a.m., the battle was finished. Bevern advanced up to a Heinersdorf (present-day Pilínkov) Eichicht line before encamping for the night. Furthermore, 2 bns and 5 sqns of Puttkamer Hussars secured his right flank in the woods, 2 bns secured his left flank on the right bank of the Neisse and I./Prinz Heinrich von Preußen Fusiliers occupied Reichenberg.

Bevern could now resume his advance for the planned junction with Schwerin's Army of Silesia.

In this battle, the Austrians lost 2 officers and 85 men dead, 21 officers and 290 wounded, 2 officers and 474 men taken prisoners or missing for a total of 25 officers and 849 men. Furthermore, FML Count Porporati, Colonel Otto Ferdinand Count von Hohenfeld and Colonel Karl von Sinewald of Pálffy Cuirassiers had been killed in action.

The Prussians lost 5 officers and 188 men dead, 25 officers and 437 men wounded for a total of 30 officers and 625 men. Furthermore, Major-General Normann and Colonel von Lettow of Erbprinz von Hessen-Darmstadt Infantry were wounded.

Extreme left, occupying an isolated barricade in the woods

Another 10 bns and 14 grenadier coys were posted at Gabel under FML Maquire to defend the Passes of Lusatia.

Detachment made before the battle (no participation in the battle)

1757, Reichenberg and Malleschitz. The Journal of Horace St. Paul from 10th April to 6th May. Translated and Edited with additional material by Neil Cogswell. Graelene Books, 1997

Harald Skala for the identification of several locations