After being defeated at Kolin in June 1757, Frederick II was forced to raise the siege of Prague and to retreat northwards toward the Saxon border.

Prince Charles de Lorraine and Field-Marshall Daun seized this opportunity and sent a large detachment of light troops (about 4,000 men) under Franz Maximilian Baron Jahnus towards Silesia and the Prussian Fortress of Schweidnitz (present-day Świdnica). However, a small Prussian force under Kreytzen protected the mountain passes that provided access to Schweidnitz.

By early August, Kreytzen had successfully forced the Austrian raiding parties to retire to Landeshut. However, Schlabrendorff, the Prussian governor of Silesia, did not consider these results satisfactory and ordered Kreytzen to oust the Austrian detachment from Landeshut.

Consequently, on August 12, Kreytzen concentrated all his troops (about 3,000 men) and marched to Hartmannsdorf (present-day Jaczków). 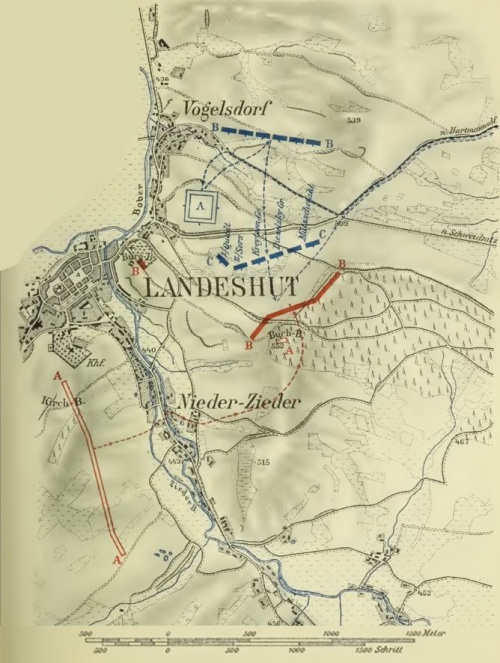 In the morning of August 13, Kreytzen's hussars (only 70 men) established contact with Grenzer light troops posted in the forest near Landeshut. The hussar's inferior numbers did not allow them to precisely reconnoitre the positions of the Austrian detachment.

In the afternoon of August 13, Kreytzen left his camp at Hartmannsdorf while leaving most of his wagons at the camp. According to the report of his hussars, he redirected his march directly towards Vogelsdorf (present-day Ptaszków).

Knowing that Grenzer light troops occupied the woods, Kreytzen decided to bring his small force closer to the Bober River.

About 3:00 p.m., Kreytzen's hussars finally located Jahnus's main force which was deployed to the right of Landeshut, facing east with its front covered by the Ziederbach. On the opposite side of this brook, the Austrians were deployed with their left wing on the Kirchberg south of Landeshut. The Buchberg, east of the town, was also occupied by Austrian troops. This hill provided a commanding position over the Austrian line.

It was 7:00 p.m. and Kreytzen's Corps had been on the march since the previous evening, However, Kreytzen decided to launch an attack. The right wing would advance in the direction of the suburb of Landeshut while the left wing, thus covered, would advance on the Buchberg. Kreytzen hoped that from this commanding position he could push back Jahnus's force towards the suburbs of Landeshut. He deployed his force in two lines and advanced upon the Buchberg.

However, Kreytzen underestimated the time needed to advance to the top of the Buchberg. At dusk, he was obliged to stop short of his objective and to rearrange his corps into a large square around his baggage train and his hussars. His position was perilous because he stood in the middle of wooded terrains with a large force of Austrian light troops within reach.

In the night of August 13 to 14, with the Austrians nearby, Kreytzen's Corps remained under arms near the Burgberg. As soon as night had fallen, Jahnus sent 50 volunteers from the Slavonisch-Peterwardeiner Grenzer to harass the flanks of the Prussian square. Prussian troops were thrown into confusion and began a chaotic fire, endangering their own comrades. During the confusion Prussian horses escaped, allowing the Austrians to capture 30 of them. About 100 Saxons, who had been conscripted into the Prussian Grenadier Battalion Diezelsky, took advantage of the confusion to desert.

Meanwhile, Jahnus crossed the Zieder with the remainder of his force and seized the heights of the Buchberg, and of another adjoining hill, known as the Burgberg, both of which provided a commanding position over the Prussians. A battalion of the Slavonisch-Peterwardeiner Grenzer covered the battery on the Burgberg while a battalion of the Warasdiner (Creutzer or Sankt.Georger ?) Grenzer regiment was deployed along the foot of the Buchberg. The other Austrian units were deployed on the Buchberg with a 6 gun battery to their right, which in turn was covered by 2 grenadier companies.

Kreytzen finally managed to re-establish order. He did not dare wait for morning in his present position and decided to retreat with his corps. He did so in complete silence while maintaining his square formation. The corps halted on the Leuschnerberg, a height east of Vogelsdorf. It was almost daybreak before the Austrians noticed his manoeuvre and opened a lively fire on his corps with their artillery posted on the Buchberg and Burgberg, without inflicting much losses. However, during the retreat, the Prussians abandoned most of their baggage to more speedily move beyond artillery range. They rallied on the Leuschnerberg.

Kreytzen deployed his regiments into a single line. The Austrians soon followed his example and formed their units into two parallel lines. Kreytzen then ordered an assault on the Buchberg. Two grenadier battalions (Kreytzen and Diezelsky) forced the Warasdiner Grenzer from the wood and managed to bring their battalion guns within range. These battalion guns then fired upon the 6 Austrian guns deployed on Kreytzen's right under the protection of 2 Austrian grenadier companies.

Before Kreytzen had issued the order of general attack, the 4 other Prussian battalions followed the grenadiers. The 6 Prussian battalions (in a single line) climbed the slopes of the Buchberg. The lively fire of the Austrians did not stop them. The Prussians stormed the abattis, drove away the Grenzer light troops entrenched on the hilltop, and made themselves masters of the Austrian guns.

Jahnus then ordered his artillery to fire grapeshot into the Prussians. The 6 Prussian battalions also made a fine target for the Grenzer light troops deployed on their front and flanks.

When Jahnus saw that the Prussians were slowing their advance, he ordered the 5 Grenzer battalions forming his first line to deploy and to engage the enemy in their own national manner. Accordingly, the grenzers immediately slung their muskets over their shoulder, drew their sabre and charged the Prussian line with a terrible battle frenzy. This unusual sight had an immediate effect on the morale of the Prussians whose line wavered, yielded ground and broke into two confused bodies.

All Prussian battalions broke and routed, the exception being the remnants of Grenadier Battalion Diezelsky. They covered the routing Prussian units, which fled to Schweidnitz by Hartmannsdorf. The Prussians abandoned 6 of their artillery guns at the foot of the hill.

The Prussians lost 30 officers and 1,337 men, most of them taken prisoners. Indeed, the entire I./Garrison Regiment VIII Quadt von Wickeradt, who had become isolated during the rout, was captured. The Austrians lost 3 officers and 96 men.

After this victory, the Austrians were free to continue their raids into Silesia almost unopposed until the end of December 1757 when Frederick reappeared in the region with the Prussian main army after his brilliant victory at the Battle of Leuthen on December 5. The Austrians then retired to Bohemia and the Prussians reoccupied Landeshut.

Summary: 6 battalions, or about 3,000 infantrymen and 70 hussars