After capturing Memel (today Klaipeda in Lithuania) early in July 1757 and securing the town as a place of arms and magazine, the Russian army under Apraxin advanced into East Prussia. General Lehwaldt, commanding the Prussian army, was ordered to oppose the Russian invasion and to march towards the Russian army.

On August 29, Lehwaldt left his camp at Wehlau (today Znamensk in the Kaliningrad Oblast) and advanced to attack the Russians who had crossed the Pregel (today Pregolya River) and had encamped at Gross-Jägesdorf. The Prussians too crossed the Pregel and Lehwaldt took up his camp behind a thick wood between Ranglack and Bushsdorf.

Soon after his arrival, Marshal Lehwaldt tried to reconnoitre the Russian positions with a small escort but could discover nothing of their large army and only perceived a few Cossacks encampments. He dispatched Lieutenant-general Schorlemmer, the Prince of Holstein, General Platen and General Ruesch with 2 hussar regiments, 15 dragoon squadrons and 2 grenadier battalions by the road to Almenhausen, in order to obtain more accurate intelligence. The grenadier battalions were posted in the wood and the cavalry advanced into the plain while the army remained under arms in camp, ready to move. Under these circumstances, it was impossible to reconnoitre the Russian positions with sufficient exactness and a mere camp of irregulars was mistakenly considered as the left flank of the Russian army. Therefore, Lehwaldt's plan of attack for the following day were based on the flawed hypothesis that the Russian left extended to Sitterfeld.

During this reconnaissance, it was reported to Lehwaldt that a number of foragers appeared to the right. In consequence of which, Lehwaldt moved with some troops from the camp to drive them away and to reinforce General Schorlemmer. By some misunderstanding, the Prussian army, contrary to his orders, got under arms and followed him through the wood, in front of which they then formed. This was soon perceived by the cossacks. The alarm was given in the Russian camp and their army got under arms, but as they did not move, Lehwaldt caused his troops to march back into their camp. General Schorlemmer, who still remained in front of the wood, was cannonaded for some time, but without suffering any loss.

Lehwaldt resolved to attack the Russian left flank which appeared to be the weakest. In fact, the ground upon the Russian right flank at Weinoten was very difficult, on account of several old ponds, between which there was no other passage than the narrow dykes by which they were divided. 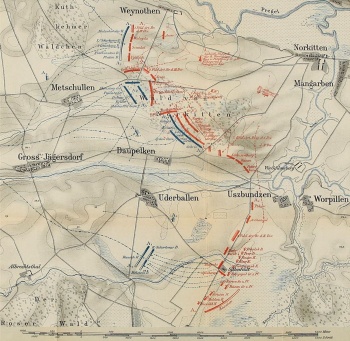 Map of the battle of Gross-Jägersdorf on August 30 1757
Source: Kriege Friedrichs des Grossen, volume III by the German Grosser Generalstab

The wood behind which Lehwaldt had taken his camp between Ranglack and Bushsdorf had three outlets which led to the Russian camp. The first was a road by the side of the river and was guarded by Malachowski Hussars. The two others had roads which were so broad that troops could move on them with a whole division in front. These avenues were guarded by picquets and the wood itself was dense and impassable.

Immediately after the Prussian troops had passed the Pregel, the Russian army encamped in a very irregular line to the east of Gross-Jägersdorf, north of the not very dense wood of Norkitten (today Mezdurechye) and south of the Pregel River. The cavalry of their right wing was posted in front of Weinoten and extended to Mischullen; the right wing of the infantry had their flanks at Weinoten and extended from there through the wood to Schlossberg, with the left to the rivulet of Auxina where the banks were steep and difficult of access. The cavalry of the left wing and the swarm of their light horse were drawn up between Sitterfeldt and the wood of Norkitten.

On August 30 at 3:00 AM, the Prussian army moved in three columns through the Puschdorfer forest. The first column marched by the left and consisted of the infantry right wing, 5 dragoon squadrons and the train of artillery. The second column moved by the right and consisted of the infantry left wing. These two columns moved close to each other through the ravines at Almenhausen, which village was upon their right. Ruesch Hussars marched before both columns to cover the heads of the columns. The third column moved through another ravine and consisted of 10 hussar squadrons and 25 dragoon squadrons. They marched by the right except the hussars who moved by the left. As soon as the army got clear of the wood, the columns separated. The first column inclined to the right, the second and third to the left. When all had formed, the Prussian army remained halted for a short time.

Meanwhile, the Russians were perfectly still and not even one single scout was to be seen, it being at that time the custom among the Russians to withdraw their outposts at retreat-beating and not to send them out again till break of day. They now fired their réveillé gun and began their usual morning music. Lehwaldt then again set his army in motion and advanced in line upon Gross-Jägersdorf.

At 4:00 AM, the Russian started their day march towards Allenburg (today Druzhba in Russia) . The vanguard under Sibilsky (4,000 horse and 15 battalions) followed by Lopukhin division advanced east of the Norkitten wood while Fermor, who was supposed to form the right hand column, was still assembling his own division in column behind Norkitten wood. Browne division waited to the west of the same wood to form the rearguard of the advancing army. The Russian army was overextended on more than 3 km.

The Russian army was already on the move when they realised that Prussian troops had been deployed into a wood in front of their position. The Russians had not enough time to form into line when the Prussians came out of the wood and deployed in perfect order into the plain while their artillery opened fire on the Russian columns.

Schorlemmer who was commanding the cavalry of the Prussian left wing sent the Malachowski Hussars to reconnoitre the wood, the cavalry went through it and round it. Schorlemmer's force consisted of the aforementioned hussars and of the Schorlemmer, Plettenberg, Platen and Finckenstein dragoon regiments for a total of 30 squadrons. As they debouched from the wood they were momentarily held back by a well sited Russian battery under major Tyutchev. Fearing to be overrun by the Prussian cavalry, Tyutchev finally decided to retire with his guns. Schorlemmer's cavalry immediately seized this opportunity to attack the Russian cavalry and to throw them back upon their infantry. However, during the pursuit, the Prussian cavalry was galled so severely by the Russian artillery that they were obliged to draw back.

Meanwhile, due to bad intelligence, marshal Lehwaldt, instead of attacking the Russian left flank as he intended, came directly upon the centre of their line. However, as soon as he realised his mistake, he made the Prussian army incline to the right to gain their left flank. The cavalry of the Prussian right wing (about 20 squadrons), led by the Duke of Holstein, attacked the cossacks deployed in front of the Russian left wing who feigned to retire, drawing the Prussian cavalry towards the five Russian infantry regiments who had deployed in line during the cavalry engagement. Holstein-Gottorp Dragoons forced their way through them, took a battery of eight guns and cut down all who opposed them. In this attack, the Prussian cavalry had got too far from the infantry and could not be properly supported by them. Furthermore, Lehwaldt had placed most of his cavalry on his left flank, leaving his right wing with insufficient cavalry units. He tried to correct the situation by sending five additional squadrons to reinforce the right flank but once more this proved to be insufficient. Therefore, the Prussian cavalry of the right flank were unable to maintain the advantage gained during the initial engagement. Artillery was soon brought to bear upon them, obliging them to retire.

At about 6:00 AM, during the attack of the Prussian cavalry, the infantry also advanced against the Russians, forced their way into the wood and took several batteries. The infantry of the Prussian left wing took a large battery and followed the Russians at the point of the bayonet to some distance in the wood. General Lopukhin was taken and gave the badge of his military order to a sergeant of Kanitz Infantry, as a token that he was his prisoner. As they advanced, they met with other batteries of “Shuvalov secret howitzers” and at length they fell in with general Rumyantsev who was marching across the wood with a reserve to support that part of the Russian army which had been defeated.

Upon the appearance of Rumyantsev's reserve, the Prussian infantry were brought to a stand and at length began gradually to retire. The thick fog, which prevailed at this time, increased the disorder. The Russians set fire to the villages of Udeballen and Taupilke, further reducing visibility. Disorder got even worse with whole battalions inclining to the right while others moving to the left, creating wide gaps between Prussian units. The Russian reserve then charged the scattered Prussian battalions and forced them to draw back. Indeed the Prussian right wing was now in danger of being taken both in flank and rear and Lehwaldt decided to retire.

The retreat of the Prussian army was made in perfect order, well covered by the cavalry. Sybilski pursued them with three horse grenadier regiments and some cossack units up to Puschdorf. Lehwaldt then returned to the camp of Wilkendorf. The battle had lasted for four hours.

The Prussians lost 123 officers, 159 non-commissioned officers, and 4,238 soldiers, and lieutenant-general Dohna was wounded. They also lost 17 regimental guns and 11 heavy field artillery guns. The infantry regiments Kanitz (IR2), Kalnein (IR4), Garrison Regt. XI (Manteuffel), Lehwaldt (IR14), Grenadier battalion Gohr (11/14) and Garrison Regt. II (Sydow) suffered the most losses. [Editor: most of these units were in the right wing of the Prussian infantry attack on the southern part of the Norkittner Wald] Furthermore, about 300 men deserted the Prussian army.

The victory of Apraxin at Gross-Jägersdorf left the gates of East Prussia wide open to a Russian invasion. Inexplicably, Apraxin did not take advantage of this opportunity but remained idle for a while before retreating towards Poland.

The following units were guarding the headquarters:

The following units are listed by some authors but not located on a map of the battle. They might be part of the mixed cavalry held in reserve. We are looking for more information: