The campaign lasted from March to November 1757. This article describes the second phase of the campaign from May 18 to July 26, 1757.

The preparations of the French and of the Allies for the campaign, the advance of the French on the Lower Rhine, their occupation of Wesel and the penetration of the French vanguards into Westphalia are described in our article 1757 - French invasion of Hanover – Preparations and initial moves (January 1 to May 17, 1757).

By May 22, all French cavalry regiments (34 sqns) who had received orders to assemble at the camp of Roermond had reached their destination.

On May 23, Maillebois arrived at Münster.

On May 24, Maillebois left Münster to reconnoitre the valley of the Ems from Telgte to Wiedenbrück.

From May 26 to 30, the Hessian contingent (about 8,000 men) marched from Stade to the camp of Hameln where it made its junction with a Hanoverian corps. The Allied army then counted about 45,000 men and consisted of: 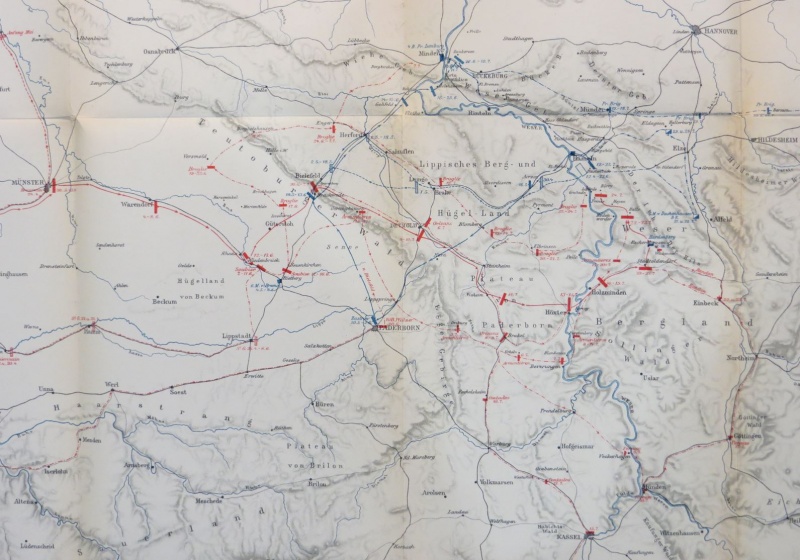 Movements in May and June before the Battle of Hastenbeck

On May 29 and 30, the Duc de Brissac left Neuss with his cavalry corps and gradually reached Wesel. Some French cavalry rgts were still cantoned at Roermond.

Since the junction of Zastrow's and Cumberland's corps, d'Estrées had sent forward several important detachments to observe them and to reconnoitre their positions.

On June 7, as instructed, Soubise marched towards Wiedenbrück with part of his corps to pass the Ems.

In the night of June 8 to 9, the Chasseurs de Fischer, who occupied the Marienfeld Abbey, were attacked by 4 Hanoverian grenadier coys (each of 120 men) and by approximately 200 horse. Only one mounted coy and one foot coy sustained the attack and their fire was so effective that the enemy quickly retired. The Hanoverians lost their infantry commander and had several men wounded. The Chasseurs de Fischer lost the captain of the chasseurs à cheval and two grenadiers. They also had a lieutenant and two soldiers wounded. During the same night, the Allies (1,500 men) evacuated Rietberg.

In the night of June 13 to 14, as soon as he was informed of the march of the Allies, d'Estrées sent 10 grenadier coys, 10 piquets and 300 horse under the Prince de Beauvau to support M. de Chabot's Volontaires Royaux who marched the whole night. The Prussian troops, who formed Cumberland's rearguard, were mistakenly fired upon by Brunswicker troops who ignored that there were Prussian units behind them. Jungkenn Müntzer Fusiliers lost 200 men to friendly fire including Lieutenant von Haugwitz of Salmuth Fusiliers killed; Captain von Collas and Captain F. von Jungkenn from Jungkenn Müntzer Fusiliers wounded; and Lieutenant von Mellinghausen wounded and later taken prisoner at Bielefeld.

In the night of June 15 to 16, the Allied army finally crossed the Weser unmolested at Rehme and encamped near Holzhausen. French parties were blocked at Herford and the detachment sent from Lemgo was not yet in position. The French took some 100 prisoners, including an officer. Furthermore, more than 80 Allies deserted at Rheda and a further 200 in the Bishopric of Osnabrück.

D'Estrées chose Paderborn to establish his new main magazines, planning to resume his advance on July 8 and to lay siege to Hameln.

By June 20, most of the French army had concentrated at Bielefeld, encamped in two lines with the town of Bielefeld in its centre, with d'Armentières' Corps between Oerlinghausen and Detmold, and Broglie in the County of Ravensberg.

By June 27, the French main army was still at Bielefeld, but d'Estrées had sent reinforcements to Broglie.

On June 28, the news that the Chasseurs de Fischer (500 horses, 600 men) would be quartered in Frankfurt created quite a stir in this city.

At the end of June, d'Auvet with a detachment of 1,000 men was sent to East Frisia to raise contributions. The Fortress of Emden constituted the sole protection of East Frisia. The fortress was defended by the Ostfriese Garnison-Bataillon (300 men by the end of June) and the population of East Frisia was disinclined to resist. The Land Militia that Frederick planned to create had not yet been raised.

On July 1, d'Estrées detached MM. de Souvré and de Chevert to respectively march to Lemgo and Herford with particular instructions.

By July 2, M. d'Auvet detached M. de Lillebonne, M. de La Chatre and M. de Sey to reconnoitre Emden from different directions. They were received with cannonballs. In the evening, 200 men of the garrison deserted. Meanwhile, Dauvet was making his dispositions to assault the town.

D'Estrées then instructed Broglie to stand ready to cross to the right bank of the Weser with his corps.

In the night of July 24 to 25, d'Estrées was informed that the enemy was retiring. Consequently, he took new dispositions and sent M. de Vogüé back towards the heights on the Allied left.

On July 25 in Versailles, the Maréchal de Richelieu was designated as the new commander-in-chief of the French Army of the Lower Rhine, replacing d'Estrées. This was the result of Soubise intervention. He had always had a tense relationship with d'Estrées and used his influence to discredit him at the court and to convince it to replace him with the Maréchal de Richelieu. Maillebois also participated in this intrigue.

Following the Austrian victory at Kolin, on June 18, the plans for the current French campaign in Germany were altered. Instead of having an army operating in Wetteravia and another from Alsace, Louis XV resolved to simply reinforce the army destined to Soubise and to combine it with the Reichsarmee. Thus a reinforcement of 20 bns and 36 sqns (including the last 20 sqns from the camp of Roermond) was ordered to the Weser to bring Richelieu's forces to 141 bns and 156 sqns.

On July 26, it was agreed that Chevert would lead the French attack and that the army would advance upon his signal. A considerable fog arose at daybreak and the armies could not see each other until 6:00 a.m. The Allies then began a cannonade that was feebly answered while the French still awaited Chevert's signal. The latter reached his attack position only at 8:30 a.m. and the army then began its general advance. During the ensuing Battle of Hastenbeck, confusion led both generals to order retreat. But finally, the French remained master of the battlefield while Cumberland first retired to the Heights of Hameln.

At the beginning of the retreat of the Allies, their baggage and train had been ordered to march towards Nienburg and had reached Steinbergen by the end of the day. The Allied army rested a few hours under the walls of the Fortress of Hameln while detachments still occupied the bridges and fords of the Hamel River. The Allied army started its retreat unmolested via Holtensen to Fischbeck. For their part, the French just sent a few detachments to the banks of the Hamel and fired a few cannonballs. Broglie's Corps recrossed the Weser and reoccupied its old positions at Grohnde.

Major-General von Brunck was left behind at Hameln with 1,000 foot and a few hundred militia. Half this force had escorted the baggage until it had crossed the Hamel and then taken post at the Afferde Watchtower. Brunck had been instructed to hold in Hameln for at least two days.

On July 27 at 2:00 a.m., the Allied army set off from Fischbeck and marched in the direction of Minden, passing the Weser Mountains at Steinbergen. The last troops reached Luhden late at night and the army pitched tents for the first time since July 24.