The campaign lasted from March to November 1757. This article describes the third phase of the campaign from July 27 to September 14, 1757.

The preparations of the French and of the Allies for the campaign, the advance of the French on the Lower Rhine, their occupation of Wesel and the penetration of the French vanguards into Westphalia are described in our article 1757 - French invasion of Hanover – Preparations and initial moves (January 1 to May 17, 1757).

On July 30, the Allied bns who had been left at Minden rejoined the main army.

A recent convention between France and Denmark prohibited French troops from entering into Bremen and Verden countries unless the Allied army had previously done so.

By August 3, the French Army of the Lower Rhine, now commanded by Richelieu, counted 129,000 men and consisted of (including the reinforcements who were underway):

The objectives of the current campaign were, in addition to the capture of the small places still holding out, the defeat of the Allied army. Louis XV had favourably received the plan proposed by the Austrian Court to lay siege to Magdeburg during the following campaign in 1758. Therefore, during the present campaign, Richelieu had only to clear the left bank of the Elbe of Prussian troops so that the entire country between the Elbe and Weser could supply his own army. Meanwhile, the Prince de Soubise and Hildburghausen would cooperate with Richelieu to prepare for the capture of Magdeburg. 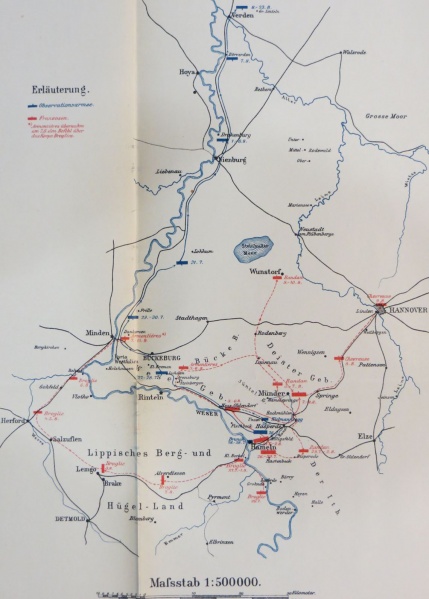 Movements in July and August after the Battle of Hastenbeck

On August 4, Richelieu met with d'Estrées who delivered up his army and explained for a few days all things needful to the new commander, and declining his offer to be second in command.

Richelieu decided that his army was exhausted by disease, efforts and deprivations and that it should be given some rest before pursuing Cumberland. Meanwhile, Richelieu established magazines in Hannover. However, rumours had reached Paris that the new British Prime Minister Pitt planned to send 15,000 men to support Cumberland. Accordingly, the French Court admonished Richelieu to act more vigorously against the Allied army.

On August 11, Richelieu established his headquarters in Linden, a suburb of Hannover.

On August 13, the cities of Braunschweig and Wolfenbüttel capitulated. All funds were seized and war contributions imposed.

On August 15, d'Armentières's Corps, still at Minden, was reinforced with 14 sqns arriving from Münster.

I have no help to expect from Your Majesty and I am unable to give him any. I am the victim of my good faith and of my fidelity to my commitments. Your Majesty will judge by Himself that I have no other resource than to try if it is still time to free my faithful allies and my poor subjects of the horrible slavery and of the oppression in which they are because of the unjust rage of France, always enemy of my house, and of the base ingratitude of the House of Austria.

On August 19, two French grenadier brigades left the main army to encamp at Neustadt am Rübenberge.

On August 20, the Duc d'Ayen took possession of Braunschweig and Wolfenbüttel, seizing 160 pieces of artillery in the first town and 20 in the latter.

On August 21, Cumberland wrote a letter to Richelieu, proposing a suspension of hostilities.

The same day (August 25), with the Allied army pushed back to the sea and no force left to oppose an eventual advance of the French army into Prussian territories, and with Soubise's Army making its junction with the Reichsarmee to proceed to the invasion of Saxony, Frederick II had no other choice than to rush to the rescue of the recently conquered Saxony and of his own estates. Leaving a holding force in Silesia, he started a force marched from Bernstadt in the Görlitz country towards the western theatres of operations, departing on August 25.

On September 2, another courier arrived from Cumberland in Vienna, asking for the empress's intercession to obtain a ceasefire with Richelieu's Army.

On September 5, Cumberland arrived at Stade, on the tidal waters of the Elbe and halted there. He sent the Count de Lynar, Minister of the King of Denmark, to negotiate with Richelieu. Frederick of Prussia decided to detach his own troops from the Allied army and to send them to reinforce the garrison of Magdeburg.

The same day (Septemner 5), M. de Rochambeau (4 bns) advanced on Wolfenbüttel and sent the Chasseurs de Fischer and some hussars towards Halberstadt where the Lusignan Cavalerie would later join them. Meanwhile, another cavalry regiment guarded the communications between Wolfenbüttel and Halberstadt.

On September 6, when Frederick heard of Lehwaldt's defeat at Gross Jägersdorf at the hands of the Russians, he wrote to Richelieu from Rötha, asking for peace.

On September 10, Richelieu signed the so-called “Convention of Kloster-Zeven.” The treaty stipulated that:

In an addendum Richelieu agreed to evacuate Bremen. A second addendum regulated the exchange of prisoners, with the exception of Prussians.

The ministry in Paris soon disapproved of the hasty initiative of the Duc de Richelieu, asking that Allied troops surrender their arms; but it was too late to modify the clauses. The French Court considered the conditions of the treaty much too lenient and advised Richelieu that, in the future, he should report to the king before fixing the conditions of such an important treaty. Richelieu disregarded the clause concerning the cessation of hostilities, as he raised heavy contributions, while employees assigned to supply ransacked the country.

On September 13, the Garrison Company Ahlimb, who defended the Fortress of Regenstein near Halberstadt, surrendered to the French.

After the signing of the Convention of Kloster-Zeven, Richelieu wanted to canton his troops in several towns while he awaited new order from Versailles, and to prepare his winter-quarters in Brunswick and Hanover. On the news of Frederick's march towards Thuringia, orders were sent to Richelieu from Paris to advance on Halberstatdt to ease pressure on Soubise's Army and on the Reichsarmee.

On September 14 and 15, Richelieu marched from the Lower-Aller towards Halberstadt with 40,000 men (94 bns, 106 sqns, 3 artillery bns and 2 Volontaires units. He advanced slowly in eight columns towards Zelle. Richelieu left only 4 bns, 4 sqns and 1 unit of light troops to face the Allied army. Polleresky Hussards were left in the Duchy of Lüneburg.

The last phase of the campaign is described in the following article: