1757 - Prussian incursions in Franconia and Thuringia

The campaign lasted from May to July 1757

On April 29, 1757, during the invasion of Bohemia, Frederick II was informed that there were large Austrian magazines in the district of Pilsen. He immediately sent Lieutenant-Colonel von Mayr from Charwatetz with 1,350 men (Frei-Infanterie von Mayr, Frei-Infanterie von Kalben and 2 sqns of Szekely Hussars with four 1-pdr guns and one 12-pdr gun) to destroy these magazines and to hinder the assembly in Western Bohemia of an Austrian force destined to support the Reichsarmee. Mayr's detachment was also instructed to spread terror in Upper-Palatinate and Franconia to impede the assembly of the Reichsarmee.

On May 8, Mayr reached Pilsen and destroyed the large magazines assembled there.

Mayr then marched towards Bischosteinitz where he destroyed other provisions destined to the Bavarian Relief Corps that was to join the Austrians in Bohemia.

When Mayr heard that Austrian light troops had been sent against him, he left Bohemia and entered into Bavarian Upper-Palatinate.

On May 13, Mayr arrived at Eslarn. Soon the rumour spread that his detachment was just the vanguard of a corps of 10,000 men sent to devastate the Reich if its principalities showed hostility towards Prussia and mustered troops to fight against this kingdom. Thus the purpose of Mayr's incursion was fully achieved.

On May 15, Captain von Petersdorff from Frei-Infanterie von Kalben, who had been sent to Nabburg to suspend recruitment, was wounded and captured by the inhabitants and brought to Amberg.

Major-General von Pechmann, who had been sent by the Elector of Bavaria to Amberg, declared the neutrality of Bavaria in the conflict. Chamberlain Baron Montgelas made the same assurances to Frederick and promised that Bavaria would not assemble its contingent destined to the Reichsarmee. Consequently, the Bavarian relief force of 4,000 men that was to assemble at Straubing at the end of May and then effect a junction with the Austrian army was redeployed. These troops were rather used to occupy the passages of the Danube where the Bavarians expected the Prussian Szekely Hussars to appear soon. The Imperial contingent of the Bavarian Circle was then sent to cover Regensburg, which the Imperial Assembly did not consider safe any more.

From Eslarn, Mayr then advanced towards Vohenstrauss by Pleystein and urged the Bavarian Government of Upper Palatinate to immediately free Captain von Petersdorff. Once more, Pechmann and the government at Amberg solemnly promised that the Elector observed strict neutrality.

On May 19, Mayr turned his attention towards the principality of the Prince-Bishop of Bamberg, marched to Vilseck and disarmed its inhabitants. He then declared that the principality was considered hostile to Prussia because it had sent relief troops to the Austrian army. He raised contributions in the principality.

On May 21, Mayr marched to Sulzbach belonging to the Electorate of Palatinate where he informed the government of the neutrality of Bavaria, asking for a similar declaration within six days. He then took two councillors as hostages.

On May 23, Mayr appeared in front of Hersbruck, 29 km east of Nuremberg. He forced the gates of the place and disarmed the inhabitants. From Hersbruck, he ordered the Council of the City of Nuremberg to send him deputies. Initially, negotiations with them did not lead to any results.

On May 24 at Hersbruck, Mayr freed the two councilors previously taken at Sulzbach.

When Mayr realised that his negotiations with the deputies of Nuremberg were not producing tangible results, in the presence of these same deputies, he ordered his troops to be ready to march on Nuremberg.

On May 26, Mayr's detachment appeared in front of the eastern suburb of Nuremberg. Captain von Achard with a few hussars penetrated into the outer defensive works of the suburb of Wöhrd and managed to pass the outer ditch and to reach the Laufer Gate. Then Mayr blocked all gates from the outside, thus isolating Nuremberg. However, the city was in a situation to defend itself. Already, on Mayr's approach, 12 infantry coys, 2 cuirassier sqns, 1 dragoon coy and a few guns were assembled within the city. Together, they formed a force of some 3,000 men. The inhabitants were of diverging opinions, some being favourable to Prussia, others to Austria.

On May 28, Nuremberg finally declared neutral.

Mayr was then informed that a force of approx. 5,500 Imperial troops had assembled and was on the march towards Nuremberg where it should arrive around June 2.

The Würzburger Major-General Baron Kolb had assembled a force near Langenfeld. It consisted of the Imperial contingents of the principalities of Ansbach and Würzburg and of the Blau Würzburg Infantry, a regiment in Austrian pay. Gradually, they were joined by the contingents of the Prince-Bishop of Bamberg, the Prince-Bishop of Eichstädt, the Count Schwarzenberg and the Teutonic Order as well as cavalry from the Principality of Hohenlohe. Altogether, this force counted some 6,000 men. It was not an experienced army and it seriously lacked mounted troops.

On June 1, Mayr set off from Nuremberg and marched to Schwabach in the Principality of Ansbach. Mayr's hussars raided the country of the margrave to force him to declare neutral.

On June 3, Mayr marched to Burgfarrnbach.

On June 4, Mayr marched to Langenzenn. At Emskirchen, Szekely Hussars took prisoners a hussar lieutenant, 9 men and a commissary belonging to Würzburg.

On June 6, Mayr advanced to Wilhelmsdorf in the Principality of Hohenlohe where he spent three days close to Imperial troops.

On June 8, Baron Kolb finally marched from Langenfeld in the direction of Wilhelmsdorf. The same day, Mayr retired to Veitsbronn where he formed a “Wagenburg.” His hussars secured the wooded country between his small detachment and the Imperials. They also occupied all bridges on the Regnitz between Fürth and Erlangen. Kolb reached Wilhelmsdorf where he encamped. Mayr's hussars harassed Kolb's outposts.

In the morning of June 9, informed that Mayr was at Veitsbronn, Kolb marched towards Vach by Herzogenaurach in an attempt to turn Mayr's position. 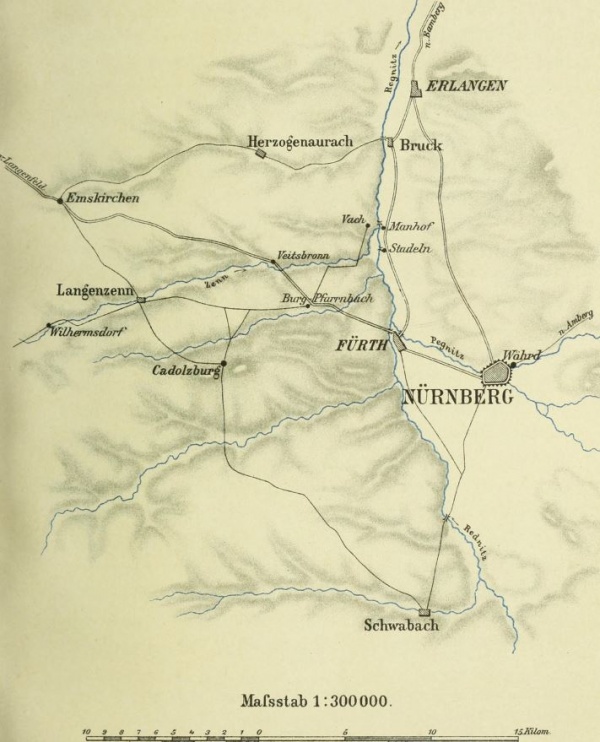 Map of the combat of Vach (June 9)

Mayr was informed in time of this manoeuvre and retired, reaching Vach before Kolb.

Mayr then passed the Regnitz and had enough time to start destroying the bridges at Manhof and Stadeln. Mayr also sent a detachment at Bruck to break the bridge there and sent his baggage to Erlangen.

Mayr's small force then marched along the wooded heights on the right bank of the Regnitz opposite Vach.

Part of Mayr's troops was still busy destroying any passage on the Regnitz when the cavalry of Kolb's vanguard appeared, closely followed by Kolb himself. The cavalry was received by a lively musket and cannon fire. Kolb had only two guns with him. The infantry of his vanguard (Blau Würzburg Regiment and 1 grenadier coy from Eichstädt) occupied Vach. A lively exchange of salvoes ensued during which the Prussians managed to set fire to all bridges.

The Würzburgers then tried twice to advance but they were driven back in disorder, abandoning their two guns. The Prussians did not pursue them because of the burning bridges.

After a half-hour combat, Kolb put a stop to his attempt to force a passage across the Regnitz at Vach. In this action, he had lost 1 officer and 6 men killed, and several men wounded.

Kolb then resolved to make another attempt further downstream at Bruck. However, Mayr marched to Bruck during the evening and stayed there for the night. Kolb encamped at Herzogenaurach.

On June 10, Mayr retreated to Erlangen where his baggage was waiting for him. With the bridges at Bruck and Erlangen broken and without any pontoon train, Kolb gave up any hope of intercepting the Prussians. He brought back his little army to Fürth and ordered Lieutenant-Colonel von Eptingen with 900 foot and 100 horse to pursue Mayr. Armed peasants threatened Mayr along his line of retreat, forcing him to accelerate his march and avoid Forchheim, which was fortified and defended by a garrison.

On June 16, Mayr reached Weismain whose inhabitants refused to open their gates to the Prussians but offered 300 Thaler as contribution. Mayr rejected this offer. The inhabitants then manned the walls. At 7:00 p.m., Mayr opened with his five guns on the town. A column of 120 men then penetrated into the suburbs and set them on fire. Although Mayr's artillery managed to breach a gate, the attackers were received with such a lively fire that they were forced to retire, losing 12 men killed and several wounded. Mayr then gave up this attempt.

By marching to Kulmbach in the friendly estates of Bayreuth, Mayr escaped the pursuit of Eptingen's Imperial detachment who had been joined by part of the armed peasants. Mayr took refuge under the guns of the Plassenburg.

However, Mayr could not stay in the Principality of Bayreuth too long because Major-General Baron Kolb was assembling his army at Fürth to march against him.

On June 21, Mayr force marched from Plassenburg towards the Principality of Coburg from where, in the following days, he launched additional raids into Franconia.

By the beginning of July, the Imperials had assembled several columns of troops to attack Mayr:

As this vastly superior Imperial army moved closer to his positions, Mayr was finally forced to withdraw. He marched by Zwickau, Chemnitz and Freiberg and reached Dresden on July 9.

In June, while Mayr was still operating in Franconia, Major-General von Oldenburg was ordered to march from Chemnitz with 1,500 men (3 former Saxon bns, Bornstädt Grenadiers and Oldenburg Fusiliers) and to advance on Erfurt in the Electorate of Mainz. As in the case of Mayr's incursion, the enemy believed this was the advanced detachment of a stronger Prussian force, which would be sent against the French.

Erfurt was garrisoned by 1,200 men (the garrison bn of Gaisruck Infantry and troops of the Electorate of Mainz) under the command of Colonel von Hagen.

On June 19, Oldenburg set off from Chemnitz towards Erfurt, by Neustadt an der Orla and Orlamünde.

Hagen rejected Oldenburg's order to surrender. Hagen then voluntarily evacuated Erfurt and withdrew with the garrison to the Fortress of Petersberg. Oldenburg thus occupied Erfurt without combat.

On June 24, informed of the Prussian defeat at Kolin, Oldenburg retired from Erfurt with a contribution 180,000 Thaler and marched back to Chemnitz, reaching it on July 2.

Bornstädt Grenadiers were transferred to Major-General Asseburg at Nollendorf while Oldenburg Fusiliers went to Dresden.