The siege took place in December 1757

The Fortress of Breslau was defended by FML Baron Sprecher. The garrison consisted of 3,500 men of Beck’s Corps and of more than 11,000 men from various units and arms who had taken refuge into the city after the disastrous Battle of Leuthen. Furthermore, there were 6,000 sick and wounded in the city, including nine generals and several officers.

On December 7, Sprecher offered to capitulate on the condition that the garrison, including sick and wounded, would be allowed free withdrawal but Frederick rejected these conditions. Sprecher then took dispositions for the defence of Breslau, subdividing the place in four sectors under the commands of Generals Wolffersdorff, Browne, Beck and Colonel Count Lamberg. The defensive works of the fortress were not very impressive but the wet ditch offered a good protection.

Sprecher vainly tried to receive precise instruction from Prince Charles and Daun. He posted placards on the gallows and up and down, terrifically proclaiming that any man convicted of mentioning surrender should be instantly hanged. 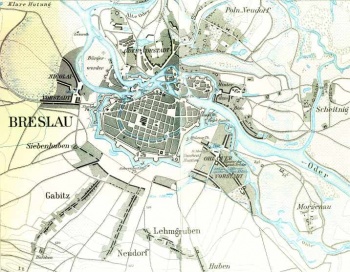 Map of the siege of Breslau by the Prussian army, December 7 to 21 1757
Source: Kriege Friedrichs des Grossen, volume III by the German Grosser Generalstab

On December 8, Frederick had 32 bns and 48 sqns in front of Breslau. His cavalry entered into the suburbs and captured a large number of prisoners before retiring in front of Grenzer light troops and hussars. Frederick established his headquarters in Dürrgoy (present-day Tarnogaj).

By December 10, the Prussians had completed their preparations for the siege of Breslau. Heavy artillery and ammunition had been sent from Neisse (present-day Nysa), Kosel (present-day Koźle) and Brieg (present-day Brzeg). Boat bridges had been thrown across the Oder at Kosel (not the fortress previously mentioned but a small village on the Oder near Breslau) and Oswitz (present-day Osobowice); and the necessary supply of fascines and gabions prepared.

In the night of December 10 to 11, Lieutenant-General von Forcade at the head of 5 bns drove the Grenzer light troops out of the suburb of Ohlau (present-day Olawa) and entrenched himself in the Monastery of the Brothers Hospitallers of Saint John of God and in the St. Moritz Church.

In the evening of December 12, Lieutenant-General Prince Ferdinand of Prussia occupied the church in the suburb of Nikolai with 2 bns. He immediately began to work at a small battery.

In the morning of December 13, the two Prussian batteries erected in the suburb of Ohlau opened on Breslau. The Austrians, expecting a general attack launched from Ohlau, tried to set this suburb afire to deprive the Prussians from any cover. Their bombardment was so good that the Prussians had to reinforce their big battery and to repair it repeatedly. Furthermore, they were forced to establish a covered way between the monastery and the St. Moritz Church.

In the night of December 13 to 14, Major-General von Wied occupied the suburb of Breslau located on the right bank of the Oder with 3 bns (Dieringshofen Grenadiers, /I./Kurssell Fusiliers, I./Wied Fusiliers) recently arrived from Brieg, thus blocking the inner gates leading into Breslau.

On December 14, , seventh day of the siege, a laboratory located near the Sand Gate blew up, inflicting heavy losses to the defenders and destroying half the gate and part of the adjoining curtain wall.

The night of December 14 to 15 was employed by the Prussians to repair their great battery which had been badly damaged by the Austrian heavy guns mounted on the walls of Breslau.

On December 15, despite the resulting lack of gunners after the explosion of the laboratory, the defenders maintained a brisk and successful fire.

On December 16, Prince Charles finally sent a letter to Sprecher from Schurz (present-day Žireč/CZ), instructing him that he should not capitulate unless he had obtained free withdrawal. Otherwise, he should defend Breslau to the last extremity.

The same same day (December 16) at 9:00 a.m., the Prussian great battery opened fire. Around 4:40 p.m., a bomb fell on a powder-magazine near the Taschen Bastion in front of Ohlau, attacked by the Prussians. The magazine blew up, creating a 30 paces wide breach in the walls, filling the ditch with earth and rubbles and setting fire to a casemate in the adjoining curtain wall. More than 800 Austrians were killed or wounded by the explosion.

In the night of December 16 to 17, Frederick ordered 1,200 men to dig a 1,000 paces long parallel at 250 paces in front of the Taschen Bastion and to plant a ricochet battery of 6 guns and 3 mortars on its left wing.

On December 17 at 11:00 p.m., the Austrian attempted a sortie in the Polish suburb but they were repulsed. Sprecher then once more offered to capitulate if the garrison, including sick and wounded, was allowed free withdrawal. Frederick rejected his offer.

During the night of December 17 to 18, the Prussians began to erect a new battery containing 6 guns and 6 mortars. At 2:00 a.m., Grenzer detachments made another sortie but failed to regain control of the suburb on the right bank of the Oder.

On December 18 at 2:00 p.m., despite of the severe cold, the Prussians continued digging towards the bastion while improving the newly built battery. They also began to dig mines from their trenches under the fire of the Austrian artillery.

In several war councils, Beck advocated that the garrison should force its way to Upper Silesia, but all other generals and staff officers considered such a plan as inadvisable, fearing heavy desertion and loss of all military equipment. In the present situation, nobody could see a reason to keep up resistance.

On December 19 at 10:00 p.m., a ceasefire was proclaimed at Breslau while negotiations were undertaken.

On December 20, the Austrian garrison of Breslau (4 lieutenant-generals, 9 major-generals, 670 officers (including 17 colonels, 22 lieutenant-colonels, 24 majors, 190 captains, 346 lieutenants and 36 ensigns) and 17,000 men including sick and wounded) surrendered as prisoners of war. The posts and the city gates were occupied by Prussian troops. The Prussians captured 81 field-pieces, including 37 of their own pieces captured by the Austrians on November 22 when they had made themselves master of the city, all fortress artillery, 1,024 horses, 220 wagons , a large quantity of grain and a sum of 144,000 Gulden.

In the morning of December 21, the Austrians came out of Breslau by the Schweidnitz Gate in the presence of Frederick II and deposited arms. The prisoners were then escorted towards the Mark by Prussian cavalry units. Frederick took up his quarters in the Castle of Breslau and garrisoned the place with 10 bns (II. and III. Garde, Grenadier Garde, 2 bns of Winterfeldt Infantry, 2 bns of Forcade Infantry, 1 bn of Prinz von Preußen Infantry, 1 bn of Jung Braunschweig Fusiliers and 1 bn of PPrinz Heinrich von Preußen Fusiliers) and the 3 sqns of the Garde du Corps. Lieutenant-General von Forcade was appointed governor of Breslau and Major-General von Geist, commander of the fortress.

With Breslau retaken, the Prussians were master of most of Silesia. Only the Fortress of Schweidnitz (present-day Świdnica) was still occupied by Austrian troops. However, it was too late in the campaigning season to consider besieging this strong fortress. The Prussians simply established a blockade of that fortress.

Tomasz Karpiński (student at the Institute of History, University of Adam Mickiewicz in Poznań, Poland) for the map