On September 28, 1758, General Wedel, who was trying to repulse a Swedish offensive in Brandenburg, arrived at Fehrbellin at the head of a Prussian force. His objective was to push the Swedes away from the Rhin River. To reach this objective, Wedel needed to capture the town of Fehrbellin. This town is only a few kilometers upstream (north) of Tarnow, the site of the engagement of Tarmow which took place a few days earlier, on September 26. Fehrbellin is about 30 km east-north-east of the point where the Rhin flows into the Havel about 20 km south-east of where in turn the Havel flows into the Elbe.

Fehbellin was an unwalled town, forming a bridgehead for the bridge across the Rhin and for the 2.5 km Rhin-Luch road. The bridge was the only major crossing point for several kms. If Wedel managed to make himself master of Fehrbellin, it would make it impossible for the Swedes to proceed further towards Berlin. The town could be entered through three gates.

Fehrbellin was occupied by 2 bns (Kronprinsens Infantry and Västerbottens Infantry for a total of 700 men) and a detachment of artillery (1 x 6-pdr gun and 2 x 3-pdr guns). A Reserve of 2 bns of Västmanlands Infantry (for a total of 600 men) and 4 sqns of Smålands Horse (for a total of 420 men) and 2 x 3-pdr guns was posted near Langen (unidentified location). The roads coming out of Fehrbellin were secured by strong guards and entrenchments were erected on the roads leading west, south and east. An earthwork built on the dam over the Luch dominated the bridge on the Rhin. The Swedish defenders occupied each of the three gates which were also defended by one gun each.

At 3:00 a.m. on the night of September 27 to 28, Wedel advanced in two columns against the eastern and southern entries of Fehrbellin. Under cover of darkness the two columns marched undetected until 5:00 a.m.

The Prussians assault, spearheaded by the grenadiers, attacked the western (Mühlentor) and eastern (Berlinertor) gates. They were repulsed at Berlinertor but, despite the tenacious resistance of the Swedes, were able to break through at the Mühlentor.

The outnumbered Swedes retreated through the streets firing muskets and artillery canister. After two hours of stubborn street fighting, the Prussians gradually managed to push the Swedes back across the northern gate and the Rhin bridge at the point of the bayonet, with heavy losses.

After reaching the entrenchments to the north of the bridge, the Swedes rallied and the fire of their artillery forced the Prussians grenadiers to halt.

At this moment, the Swedish Reserve arrived from Langen. Its arrival was followed by a long cannonade.

The Prussians launched an unsuccessful assault against the hill overlooking the bridge.

Wedel tried to set fire to the bridge but the Swedes thwarted his attempt.

The first elements of the main body of the Swedish army were now arriving from Neu-Ruppin.

Wedel abandoned his design against Fehrbellin and orderly retreated to his camp near Dechtow.

In this affair, the Swedes lost 5 officers and 91 men killed or wounded; and 9 officers and 222 men taken prisoners. They also lost a large number of ammunition carts and baggage wagons. The Prussians lost 1 officer, and 13 men killed; and 2 officers and 33 men wounded. 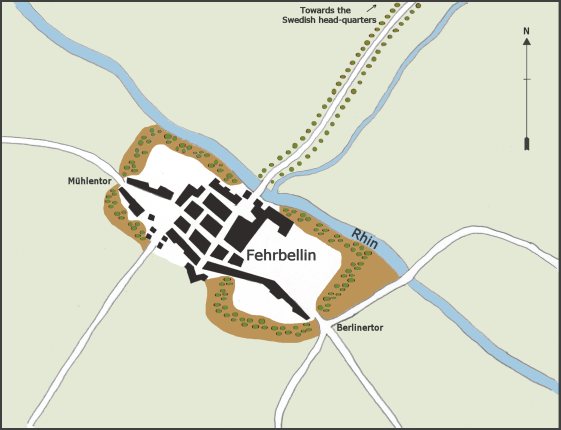 Map of the action at Fehrbellin as per a sketch published in the book Svenska Krigarbragder by Grimberg and Uddgren.

Duane C. Young, Ph.D. for the additional info provided on the location of the engagement