The campaign lasted from August to November 1758

Previous operations of the Allies

On May 9, Ferdinand of Brunswick detached Lieutenant-General Prince von Ysenburg to Marburg, to organise the defence of Hesse against Soubise's Army. Ysenburg left Westphalia with a force of 2 bns, 2 sqns and 2 light troops coys.

On May 21, Prince Xavier arrived in Linz in Austria to take command of the Saxon contingent destined to join the French armies in Germany. He then reviewed six of his regiments.

On July 23, while Ferdinand still operated on the west bank of the Rhine, the Duc de Broglie defeated Ysenburg in the Combat of Sandershausen. By this single action, Soubise became master of Hesse. He was now free to push farther in Hanover and Westphalia. This manoeuvre became dangerous to Ferdinand.

By the end of July, Prince Xavier's Saxon contingent arrived at Strasbourg after having marched from Linz by Braunau and Freising. This corps then proceeded to Andernach. Princess Maria Josepha of France, who had taken patronage of the contingent, sent 24 French guns as a gift to "her" corps.

On August 3, a British contingent of 12,000 men, under the command of the Duke of Marlborough, disembarked at Emden. Indeed, the successes of Frederick II at Rossbach during the previous year and those of Ferdinand in Hanover since January had enticed the British Government to send reinforcements.

On August 9 and 10, fearing an attack on the British contingent troops recently landed and anxious about his bridge on the Rhine, Ferdinand army recrossed to the right bank of the Rhine with his army and then dismantled his bridges. Meanwhile, General Hardenberg evacuated Düsseldorf and retired to Lippstadt.

On August 10, Contades encamped at Alpen while his vanguard under the Duc d'Armentières reached Kleve. Düsseldorf was occupied shortly after the departure of Hardenberg.

On August 12, a storm broke the bridges that the French had erected over the Rhine, delaying Contades.

In the following days, the corps of the Duc d'Armentières crossed the Rhine at Wesel and made a junction with the main French army.

On August 17, the British contingent reached Coesfeld after marching through a very heavy rain.

On August 19, Contades’ Army, after much delay caused by the destruction of its bridge, finally managed to cross to the right bank of the Rhine.

On August 22, Contades remained at Schermbeck.

On August 23, Contades crossed the Lippe on three bridges near Dorsten to avoid a direct confrontation with the Allies who had been reinforced by the British Contingent.

On August 28, Ferdinand marched from Coesfeld with his army.

The Allies and the French remained in these position until the beginning of October.

On September 3, Prince Xavier (aka Comte de Lusace) at the head of the Saxon contingent (12 regiments totalling some 9,000 men) encamped at Castrop, 15 km from Recklinghausen, on his way to make a junction with Contades. Prince Xavier used the following weeks to train his corps, especially the coordination with the French cavalry newly allocated to him.

On September 5, 50 Hanoverian jägers led by Captain Scheiter passed the Lippe upstream of Gahlen and defeated a party of 100 French horse, making several prisoners. They then proceeded towards Wesel where they destroyed a convoy of 30 supply wagons, took 60 oxen and captured 3 couriers.

By the end of the summer, Contades was elaborately manoeuvring to capture Lippstadt or some fortress in the Rhine-Weser countries. However, as long as he could not cross the Lippe, it was impossible to Soubise's Army to advance in Hanover beyond the Werra River. Therefore, Soubise waited at Kassel for almost a month for Contades to advance close enough to allow for mutual support.

Both main armies remained in their former headquarters.

On September 17, after having made several demonstration as if he intended to cross the Weser, Oberg suddenly moved to Paderborn with 14,000 men, on his way to Kassel where he intended to make a junction with Ysenburg to oppose Soubise in Hesse.

On September 24, the Belzunce Brigade along with a brigade of cuirassiers were detached from the main French army towards Hamm.

On September 28, Soubise asked Contades for reinforcement to fight the combined corps of Oberg and Ysenburg near Kassel. During all the manoeuvres of the Allies against Kassel, Contades had remained idle in his camp at Recklinghausen where he was since August 19.

During the night of September 28 to 29, as a diversion, Contades ordered Saint-Pern with his Reserve (8,000 men) to make a surprise attack on the isolated force of the Duke of Holstein-Gottorp (3 bns and 2 dragoon rgts). Saint-Pern left Lünen, made himself master of 2 bridges over the Lippe at Lünen and Beedeburg (unidentified location). His corps then marched during the night to approach Holstein-Gottorp's positions, arriving at its destination at daybreak. An Allied post on the road of Lünen temporarily delayed its advance before retiring in good order. Saint-Pern finally launched an assault on Bork where Holstein-Gottorp occupied advanced positions. The timidity of the French assault allowed Holstein-Gottorp to escape unmolested with his entire force.

At the end of September, Contades was instructed by the Duc de Belle-Isle to consume or destroy all subsistence on the Upper-Lippe, in the neighbourhood of Paderborn and in the country lying between the Lippe, Paderborn and Warburg. These instructions were given to prevent a march of Ferdinand on the Rhine or on the Ruhr. 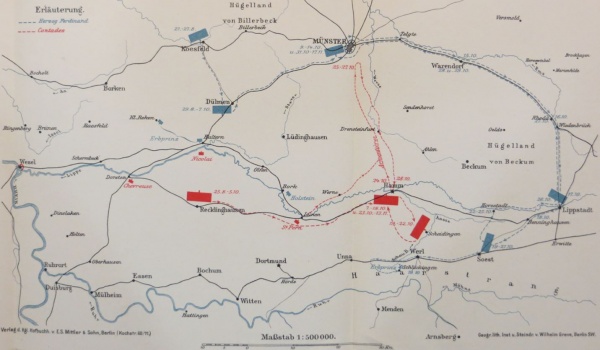 Allied and French manoeuvres in Westphalia from August to November 1758.

On October 8, Ferdinand marched in 3 columns from Dülmen to Nottuln with the main body of his army. General Imhoff and Lieutenant-General Wutginau joined him there with their own corps.

To mislead the French on his intentions, Ferdinand ordered to repair the roads in all direction but particularly those leading towards the Weser. Quarters were established in Paderborn and in various other towns and villages

When Contades was informed of Soubise's victory, he thought that he now had his chance against Ferdinand.

On October 14, Ferdinand marched his army from Münster to Telgte, about 10 km eastward, leaving a garrison in Münster. Meanwhile the Hereditary Prince advanced to Rheda.

On October 15, Ferdinand set off from Telgte, marching in a wide sweeping movement by way of Warendorf and Wiedenbrück towards Lippstadt. Meanwhile a detachment under Major-General von Kielmannsegg, along with Scheiter Corps, made demonstrations on the Lippe at Lünen and Hamm.

On October 16, Ferdinand was at Rheda. 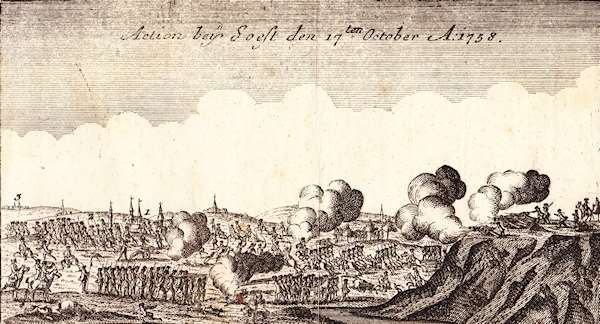 Ferdinand abandoned his plan to attack Contades and decided to move closer to the Lippe to maintain his lines of communication with Münster and Hannover.

On October 21 in the afternoon, Ferdinand’s Army set off from Soest and marched all night, reaching the excellent position of Hovestadt early on October 22 and encamping there.

On the night of October 26 to 27, Ferdinand’s vanguard, under the Duke of Holstein-Gottorp, effected a junction with Imhoff’s detachment near Rheda. At 3:00 a.m., they both resumed their march.

On October 31, Ferdinand arrived at Münster with the rest of his army and reoccupied his old camp.

At the beginning of November, Belle-Isle, the French minister of war, realising that any advance into Germany was now almost impossible during this campaign, reinstated his instructions to Contades to consume or destroy all subsistence, especially forage, between the Weser and the Rhine as well as between the Lippe, Paderborn, the Diemel and the Fulda.

On November 16, the French main army separated in three columns at Bochum. These columns marched off respectively to Wesel, Düsseldorf and Cologne.

By November 20, the French had taken their winter-quarters between the Meuse and the Rhine, from the Dutch border to Andernacht. Only 5,000 light troops had been left on the right bank of the Rhine beyond Wesel and Düsseldorf. Entrenchments were built in the vicinity of Emmerich to prevent the Allies from crossing the Rhine.