1758 - Russian invasion of Brandenburg – Arrival of the Russians

For the campaign of 1758, the Russians had assembled a very powerful army consisting of 20 cavalry regiments, 32 infantry regiments, 4 grenadier regiments, 14,000 Cossacks and 2,000 Kalmyks, 70 howitzers, 6 mortars and 166 guns of various calibres. Furthermore, Empress Elizabeth Petrovna ordered the creation of an Observation Corps of 5 brigades of 4 battalions each. The effective strength of this Russian army was about 70,000 men.

From January to June, the Russian army progressively proceeded to the invasion of East Prussia and then advanced into neutral Poland in a position allowing it to invade Eastern Pomerania, Brandenburg, or Silesia. Fermor, the commander-in-chief of the Russian army, finally decided to invade Brandenburg.

The Russians advance towards Brandenburg

On July 3, a Prussian corps under the command of Dohna, coming from Stralsund, arrived at Bentzin.

On July 5, Resanov took position at Marienwerder (present-day Kwidzyn) to cover the magazines and to guard the passage of the Vistula.

Rumyantsev’s Division was soon reinforced with the horse grenadier sqns and dragoon sqns and with 500 Horvat Hussars who had recently rejoined the main army at Posen.

In the night of July 8 to 9, Dohna was informed that the Swedes had sent strong detachments towards the Peene. He asked himself if he could induce the Swedes to offer battle before the arrival of the Russians on the Oder.

When the magistrates of Cüstrin heard of the presence of Russian light cavalry at Liebenau (present-day Lubrza), Meseritz, Königswalde (present-day Lubniewice) and Schwerin (present-day Skwierzyna), they turned to Colonel Count Hordt to obtain his support. Hordt sent 1 bn of Frei-Infanterie von Hordt with one 3-pdr gun under Lieutenant-Colonel von Goltz to Zielenzig (present-day Sulecin), along with a number of Land Hussars and Knobelsdorff’s hussar detachment. Hordt had thus deprived himself of almost half of his forces, including his best hussars, while he was facing Rumyantsev’s strong cavalry division.

In the afternoon of July 10, Demiku’s detachment appeared to the south of Driesen and vainly summoned Hordt to surrender. Demiku then bombarded Driesen with his light pieces. An intermittent artillery duel lasted until the next morning causing very little losses. 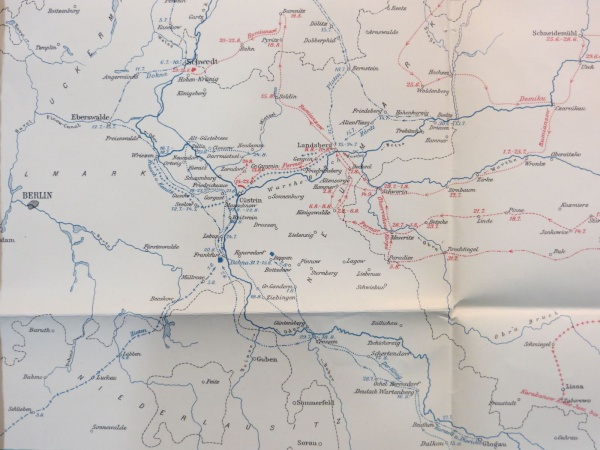 Prussian and Russian manoeuvres in Brandenburg in July and August 1758.

During the night of July 15 to 16, Hordt’s exhausted detachment finally met the troops of General Ruesch, a few km northeast of Landsberg. Altogether, they took refuge in Landsberg. In the engagements of Hohenkarzig and Friedeberg, Hordt had lost in killed and wounded 66 men of the Land militia, 17 invalids, 29 Land hussars and 75 men of Frei-Infanterie von Hordt. Furthermore, more than 700 men of Frei-Infanterie von Hordt had deserted to the enemy. In addition, 1 officer was killed, 2 wounded and 7 captured. Overall, he had lost some 900 men. The Russians suffered only minor losses.

On July 18, Fermor’s Army reached Pinne (present-day Pniewy) and encamped there, building five flèches in front of the camp. Part of Rumyantsev’s light troops effected a junction with the army at Pinne and were used to make forward reconnaissances. In this town, Fermor was informed of the capture of Driesen and of the combat near Friedeberg. He decided to throw a strong garrison (a few hundreds men with 5 artillery pieces) into Driesen and to use it as a base for his operations.

On July 25 and 26, the Russian army marched towards Meseritz where Fermor wanted to wait for the arrival of the Observation Corps.

On July 29, Kurssell and Diericke reached Crossen with their 7 bns.

At the end of July, Prince Heinrich ordered Belling to return to Leipzig with his detachment. Dohna was then forced to send additional hussars to reinforce Malachowski at Lagow. Meanwhile, with the Russians advancing through Poland, Frederick retreated from Königgrätz towards Landeshut (present-day Kamienna Gora) in case the Russians would advance on Berlin or break into Silesia.

The decisions of Fermor’s War Council and its reasons were communicated to the Conference, to Daun and to Kaunitz. The Conference in St. Petersburg agreed with these but emphasized that it was imperative to weaken Dohna's Army as much as possible to support the operations of the Austrians.

For his part Lieutenant-General Count Hamilton did nothing to ease the junction of his Swedish army with the Russians.

At the beginning of August, Tockeli and Karabanov evacuated Silesia and rejoined the Observation Corps.

On the night of August 3, a Prussian force, consisting of 1 grenadier bn and 600 hussars and dragoons, and 3 guns under the command of Ruesch, marched from Cüstrin towards Landsberg.

In the night of August 4 to 5, Dohna sent Major-General Malachowski at the head of 10 hussar sqns (Malachowski Hussars (5 sqns), Ruesch Hussars (5 sqns)), 300 dragoons; and 3 bns (I./Bülow Fusiliers, I./Alt-Kreytzen Fusiliers, I./Sers Fusiliers) under Major-General Dierecke from Reppen, hoping to surprise Stoyanov's detachment at Sternberg. Meanwhile, Stoyanov endeavoured a similar attempt on the Prussian camp at Reppen. The two vanguards clashed at Bottschow (present-day Boczów). After a brief skirmish, Malachowski retired to Reppen and Stoyanov retired on the main army.

Browne had warned Fermor of the importance of seizing Colberg immediately, as Russian troops arriving in Eastern Pomerania would soon suffer from a shortage of food that would not put a stop to all further operations, but would also force the Russians into an inglorious retreat. Browne suggested to detach 500 grenadiers and 4 artillery pieces from Resanov’s Corps stationed on the Vistula, to transport these troops aboard wagons and to storm Colberg which had only a small garrison.

After the arrival of reinforcements from Silesia, Dohna assembled a strong vanguard under Lieutenant-General von Manteuffel at Reppen

Between August 12 and 16, Fermor finally took dispositions for the capture of Colberg. He ordered Resanov to advance on Colberg from the Vistula with part of his corps (Sibyrskiy Infantry, Nevskiy Infantry, Belozerskiy Infantry, 30 field pieces, 30 hussars and 300 Cossacks). The fleet would also participate in the enterprise.

Meanwhile, Fermor had reorganized his army, distributing the former cavalry division among other divisions and creating a 3rd Division which he placed under the command of Rumyantsev. Fermor also made preparations for the establishment of magazines in Pomerania and Neumark. He also sent reconnaissance parties towards Stettin, Schwedt and Cüstrin. 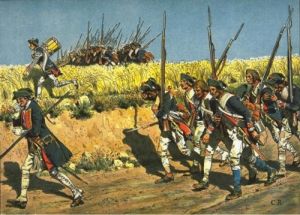 In the following days, Fermor received reports that Dohna’s Army still stood near Frankfurt an der Oder; that Schwedt was occupied only by a small infantry detachment; and that 1 bn and a few hussars were occupying Stargard. In Stettin, there was o force of 10,000 Prussian foot, mainly militia with a few sqns of Land Hussars. Another reconnaissance party reported that Colberg was occupied by only 500 militia but had a good artillery.

In the night of August 15 to 16, Dohna set off from Frankfurt and marched towards Cüstrin.

In the night of August 18 to 19, Lieutenant-General Schorlemmer, learned of the capture of Schwedt as he arrived at Wriezen. He immediately set out to drive the Russians out of the town. However, Dohna considered the action of unsupported cavalry against a place occupied by infantry and artillery as hopeless and ordered Schorlemmer to return to the army.