The advance of the Russian army from Poland into Brandenburg, the counter-manoeuvre of Dohna’s Army and the siege of Cüstrin are described in our article 1758 - Russian invasion of Brandenburg – Arrival of the Russians.

Operations come to a standstill 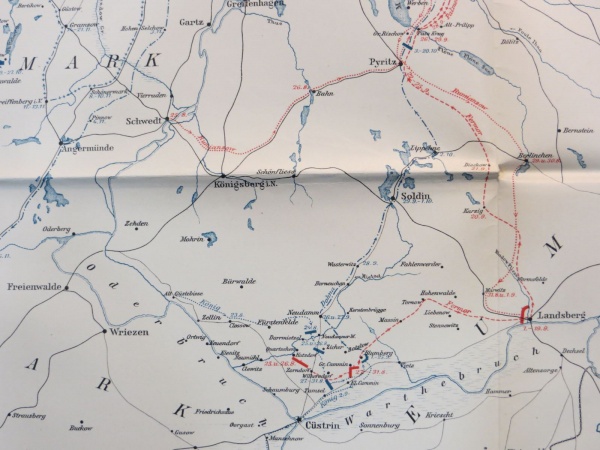 Prussian and Russian manoeuvres in Brandenburg in September 1758.

On September 9, Resanov reached Bütow (present-day Bytów) with his 3 rgts.

On September 10, some thousands Cossacks attacked Manteuffel's outposts and managed to penetrate up to the chain of camp guards before being stopped by Prussian hussars. The Cossacks retired around 9:00 a.m.

St. André, the Austrian envoy, and Prince Karl of Saxony both expected Fermor to march to Soldin as soon as his army would be reorganized and resupplied, to cut the line of communication between Dohna’s Army and Stettin. From this position, the Russian army would have the rich Pomerania behind it and would prevent the Prussians from advancing on the Vistula because their line of communication with Cüstrin (present-day Kostrzyn nad Odrą) would be dangerously exposed. Above all, Driesen (present-day Drezdenko) would have to remain strongly occupied. From Soldin, it was easy to rapidly reach Schwedt from where it was possible to collaborate with other allies. St. André and Prince Karl believed that Dohna’s Army could not be stronger than Fermor’s. Nevertheless they failed to convince Fermor to undertake such operations. Fermor considered that his army was unable to sustain a new engagement and did not wish to suffer additional losses.

On the night of September 11 to 12, hearing that Fermor intended to attack Manteuffel, Dohna marched back to his previous camp at Blumberg. Soldin was evacuated and only a few passages through the ponds and marshes between Vietz (present-day Witnica) and Kerstenbrügge (present-day Mostno) remained occupied. The Russians followed with small Cossack detachments.

During the night of September 18 to 19, Manteuffel marched through Neudamm (present-day Dębno) to Soldin. He reconnoitred the Russian positions there and the Russian detachments retired.

Freiregiment Hordt along with some cavalry set off from Frankfurt an der Oder to follow the Russian cavalry initially posted to the south of the Warthe in its retreat by Landsberg to rejoin the Russian main army.

On September 24, the Russian Major-General Dietz marched to Passkrug (unidentified location) with his brigade.

In St. Petersburg, the empress renewed her orders to Fermor to advance as soon as he could towards the Oder. The Conference wanted Fermor to engage Dohna’s Army and then take up his winter-quarters in Eastern Pomerania, capturing Colberg if possible. The Austrians doubted of Fermor’s good-will and feared that he would soon retire behind the Vistula.

The siege lasted till November 1 when Palmenbach retired to join the main Russian army retreating towards Poland.

On October 12, the Russians captured 6 hussars and 60 men of Frei-Infanterie von Hordt.

On October 15, 2 Russian rgts of Resanov's Corps joined Fermor while the Russians abandoned the pass of Passkrug.

Fermor’s Army was now lacking proper supply of forage and wood. The rough season started with heavy downpours, the roads were bad and convoys from the Vistula could not easily reached Fermor’s camp. Supply coming on the Warthe and Netze (present-day Noteć River) were also interrupted. Since no magazines had been established in Pomerania, the army began to suffer bitter hardship. The war council sought to remedy the situation by sending back to the Vistula the entire heavy baggage and all men and horses unfit for service. Fermor even considered that a victory over Dohna would not produce tangible results, since the area between the Oder, Schwedt and Landsberg had already been depleted of everything that it would be impossible for the Russians to remain in the region. However, Fermor considered that once the Prussians would have retreated behind the Oder for the winter, it would be possible to establish some small magazines right after the harvest, and that Colberg could finally be captured. However, the neighbourhood had no forage left, and many supplies had been destroyed by the plundering and destructive lust of the light troops.

On October 19, Fermor’s Army marched to Reetz (present-day Recz). Artillery was deployed in batteries and flèches to cover the camp. Fermor sent an officer to Colberg to report on the situation.

On October 25, Major-General von Platen assembled his detachment (5 bns, 9 sqns) in Massow for the relief raid on Colberg.

On the night of October 29 to 30, Palmenbach assembled the siege corps in a camp near Stöckow (present-day Stojkowo). He intended to march from this camp towards Köslin where he hoped to effect a junction with the main army and then march back to Colberg. Palmenbach learned from them that the Prussian relief force had not resumed its advance towards Colberg and that the garrison was busy destroying the siege works. Now Palmenbach wanted to make up for his hasty withdrawal.

By the end of October, the Conference in St. Petersburg had finally recognized that the Russian army had to retire behind the Vistula for its winter-quarters.

On the night of October 31 to November 1, Palmenbach retired from the vicinity of Colberg.

On November 5 in Western Pomerania, Manteuffel’s detachment marched from Stettin by Penkun towards Greiffenberg (present-day Angermünde).

On November 9, Fermor's column marched to Crone an der Brahe.

On November 10, Fermor's column marched to Schneidemühl (unidentified location not to be confounded with Pila).

On November 13, the Russian army divided up into small detachments, each marching to its assigned winter-quarters.

On November 21, as ordered by Frederick, Dohna detached the Frei-Regiment Hordt and the Malachowski Hussars from his camp at Eilenburg to protect Eastern Pomerania and the Neumark against the incursions of Russian light troops.

On November 22, the Russian garrison of Driesen (3,000 men under General Oliz) evacuated the fortress, after razing the defensive works. It then retired to Poland.

At the beginning of December,the Frei-Regiment Hordt and the Malachowski Hussars reached Stargard. Their reconnaissances confirmed that the Russians had completely evacuated Eastern Pomerania. The country was so devastated that even such a small force had difficulty to find proper provisions.

By mid-December, all Russian troops had reached their winter-quarters.

In January 1759, Major-General von Platen returned to Eastern Pomerania with the Alt-Platen Dragoons. He then took command in this region.