As soon as August 4, an Austrian force under the command of the General of Cavalry Marquis de Ville appeared in front of the Fortress of Neisse (present-day Nysa/PL). De Ville’s Corps consisted of the 3 Saxon Chevauxlegers regiments, 1 uhlan regiment and a large number of light troops. He then established a blockade around the place.

In August, after the departure of Zieten’s Corps for Brandenburg, de Ville did not meet any opposition in Upper Silesia and put the region to contribution. He also blockaded the Fortress of Cosel (present-day Kędzierzyn-Koźle/PL).

On September 21, FZM Count Harsch, leaving some 7,000 Grenzer light troops and hussars under FML Count Kálnoky in the region of Trautenau (present-day Trutnov/CZ), marched by Wartha (present-day Bardo Śląskie/PL) to effect a junction with de Ville’s Corps which was marching by Patschkau (present-day Paczkow/PL). De Ville had left a force of some 1,800 light troops to maintain the blockade of the Fortress of Cosel.

On September 27, the Austrian War Council, assembled at Vienna, decided to send new instructions to General Harsch telling him to lay siege to the Fortress of Neisse.

On September 28, Harsch’s Corps effected a junction with part of de Ville’s Corps at Frankenstein (present-day Ząbkowice Śląskie/PL). He was now at the head of approx. 14,500 foot and 5,000 horse. 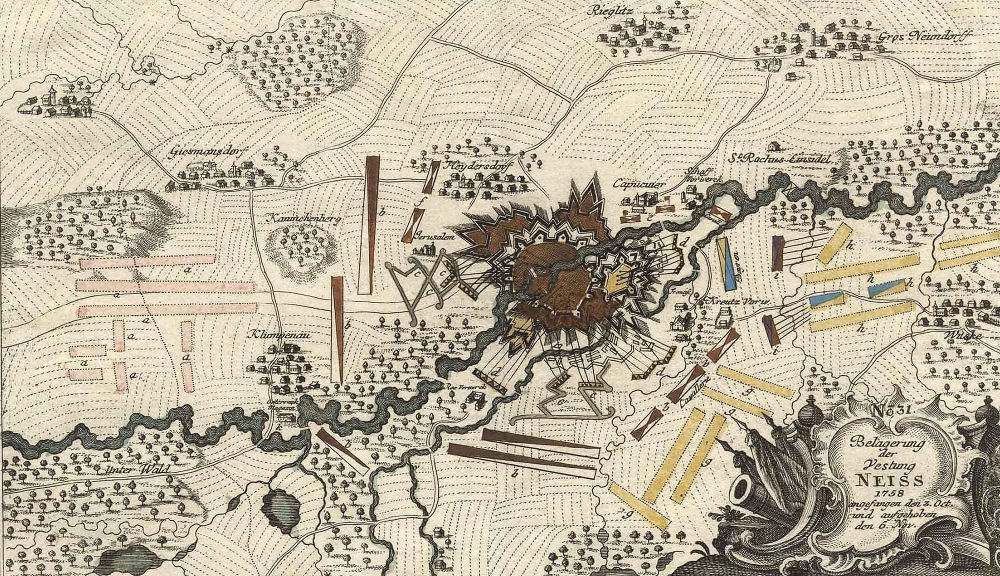 Map of the siege of Neisse

The fortress of Neisse was defended by Lieutenant-General von Tresckow at the head of a garrison of approx. 5,000 men (Tresckow Infantry, 4 bns of the Garrison Regiment Blanckensee, 1 coy of Garrison Artillery, 1 coy of miners, 600 cuirassiers, dragoons and hussars). He had enough provisions and ammunition to sustain a siege. However, from the beginning, the defence of the fortress was poorly led. Nothing was done to delay the preparations of the besiegers.

On October 3, an Austrian army under Harsch appeared in front of Neisse. On its way, it had effected a junction with the rest of de Ville’s Corps near Ottmachau (present-day Otmuchow/PL). Harsch immediately encircled the fortress. The main body of his army encamped on the left bank of the Neisse. Parties of hussars and Grenzer light troops were sent to the right bank to cut all communications. Harsch’s advanced posts were pushed close to the fortress. However, Harsch was still waiting for his heavy artillery which was on its way from Olmütz (present-day Olomouc/CZ) by Sternberg (present-day Šternberk/CZ), Würbenthal (Vrbno pod Pradědem/CZ) and Zuckmantel (present-day Zlaté Hory/CZ).

After the Austrian victory at Hochkirch in Saxony on October 14, Field Marshal Daun sent messengers to General Harsch urging him to speed up the siege of Neisse.

On October 17, Daun, who was encamped near Baruth in Saxony, detached FML Count Guasco at the head of 8 bns to reinforce Harsch’s Army.

On October 20, the first heavy artillery pieces arrived at Neisse.

On October 21, the Prussians opened for the first time a lively artillery fire against the Austrian positions.

On the morning of October 26, the Austrian batteries opened on Neisse. The same day, after a brilliant manoeuvre, Frederick II took possession of Görlitz and threw bridges over the Neisse River to enter into Silesia and relieve the Fortress of Neisse.

On October 28, Daun, then posted near Görlitz, sent a new reinforcement to Harsch. This reinforcement consisted of 9 bns, 10 grenadier coys and 4 cavalry rgts under FML Count Wied.

On the night of October 28 to 29, Harsch opened the first parallel, only 300 paces from the defensive works of Neisse. The fortress responded vigorously to the artillery fire of the besiegers, but losses were small on both sides.

On October 30, Frederick’s Army passed the Neisse River. The same day, from the vicinity of Görlitz in Lusatia, Daun sent instructions to Harsch to raise the siege of Neisse because he had decided to concentrate his efforts against Dresden in Saxony. Daun also specified that Harsch had to wait for positive confirmation that Frederick was approaching Neisse before undertaking his retreat.

By the end of October, Harsch’s Corps consisted of:

On November 1, Frederick set off from Lauban in the direction of Neisse. The same day, seeing that Frederick’s Army was approaching, Harsch sent his siege artillery back towards Olmütz. Meanwhile, ammunition and siege material were transported to Jägerndorf (present-day Krnov/CZ).

On November 4, Harsch retired from Neisse and entrenched his army near Giesmannsdorf (maybe Gostomia/PL).

On the afternoon of November 5, a second division of Harsch’s Army was about to follow when the Prussian defenders of Neisse made a sortie with 600 foot and 300 horse against the trenches which were still occupied by a few Austrian troops. The Prussians entered into the siege works and took 1 colonel and 458 men prisoners. However, they had to retire into the fortress when Austrian reinforcements arrived.

During the night of November 5 to 6, Harsch raised the siege of Neisse.

On the morning of November 6, based on the false information that the vanguard of Frederick’s Army had already reached Frankenstein, Harsch retired from Giesmannsdorf towards Zuckmantel. The same day, Frederick’s Army marched to the vicinity of Münsterberg (present-day Ziębice/PL). Frederick established his headquarters in Gross-Nossen (present-day Osina Wielka/PL).

The timely arrival of Frederick’s Army put an end to the Austrian enterprise against the Fortress of Neisse.