The following document is a letter sent by the Comte de Melfort on July 3 1759, describing the French unsuccessful attempt on Lippstadt on July 1 1759.

It has been impossible to me to report earlier on what happened last Sunday, July 1.

Around 1:00 P.M., I was ordered by the maréchal de Contades to march, with all that I could gather from my brigade and with 300 dragoons who should join me, on the town of Lippstadt, to repulse any troop that would be outside, and to summon the governor to surrender by telling him that the army of the Hereditary Prince was in full march to retire on the Lower Weser, that he had no hope to be rescued and that consequently, if he did not instantly surrender his place, he could not expect any kind of capitulation.

An hour after receiving this letter, I was heading for Lippstadt by the right bank of the Lippe. As time was pressing me, having 3 and a half lieues (about 14 km) to do before approaching, I left without waiting for the 300 dragoons, who however, because of my infantry, joined me on my way.

The enemies had in front of Lipperode, a village half a lieue (about 2 km) from Lippstadt, a redoubt that they abandoned as our troops approached.

At the left of the village, there is a small brook on which there is a drawbridge, where I sent a lieutenant and 20 dismounted dragoons, that I supported with the rest of the piquet.

I sent a cavalry piquet of my brigade to the right of the village with instructions to push forward many small outposts to cover my right flank. And since I did not want to let the enemies time to reconnoitre, I debouched with my vanguard on the terrain separating the glacis of the town from the hedges of the village of Lipperode, where I left my troops formed in columns, occupying only half of the highway.

As soon as we debouched from the hedges, they cannonaded us and I noticed jägers retiring on the town by the right and left flanks of the village.

Since in this position we were at half-range for their guns and they were shooting some 19-pdr cannonballs, I did not consider appropriate to debouch with more cavalry until the infantry arrived. This way, the jägers, seeing that we were remaining on our position, came back on our flanks. But having dismounted 100 dragoons we soon chased them back, even though two troops of infantry were marching to their support.

As soon as the head of my infantry appeared, I launched 100 horses upon them. They pushed them back up to the glacis and captured them 3 soldiers, a grenadier and a backemberg (?) (maybe Bückeburg Carabiniers).

As I considered having fulfilled the first objective of my mission who was to repulse any troop that would be outside the town, I prepared to fulfill the second and ordered the marquis de Vassé, who while we are on the subject I congratulate myself to have chosen as lieutenant-colonel of the Volontaires Liégeois, to go with a drummer make the summon that I had to do. He did so, in the middle of musketry, with the best grace possible.

After managing to explain that he had to negotiate, he came to tell me that the Hanoverian officer had warned him that he would fire his guns if I did not stop the skirmishers from firing. Even though I sent orders upon orders, it was impossible to stop them and I was obliged to go by myself. It was only half an hour later that I was able to have all my people under control.

I then approached the place where the negotiations took place. An English colonel, aide de camp of the Hereditary Prince, asked if I was the one commanding the troops. Once he had been told that this was me, he came to talk to me and told me that he had thought that the summon that had just been made to M. d'Ardemberg was a joke. However, he considered that M. de Melfort, whom he had heard advantageous comments from the Hereditary Prince, was unable to undertake such a thoughtless action without order from his general. He invited me to look at the place, and guaranteed me that it was well supplied, that there was a sufficient garrison, and that, if M. de Melfort commanded the place, he was sure that he would not surrender it upon a simple summon. I answered him that circumstances sometimes forced the bravest men to behave according to political principles when their means and forces were not at par with their courage. Furthermore, I declared to him that I was charged to assure him that M. d’Ardemberg could not hope for any capitulation if he waited the place to be besieged. He answered me that brave men, to save their honour, should be ready to incur all kinds of dangers, and that, by doing their duty, they rather expected to deserve the esteem of the French than to receive a treatment which their generosity would make them unable to apply. Furthermore, since he was not carrying any response from M. d'Ardemberg, if I wanted to summon him in writing, he would deliver it to him although he believed that he had guessed his thoughts and that his answer would be negative.

After having waited till night, I received a written answer that I could read only when I returned to Lipperode. In substance, he knew too well the Hereditary Prince's manoeuvres to believe that if he had moved back, it was only to jump better. A verbal answer also mentioned that, if in 15 minutes the French troops were still at the same place, he would begin to fire again. Besides that, prisoners told us that there were from 4 to 5,000 men in the place. Here is everything that I could learn during this day. I have the honour to be, Sir, your very obliging and very obedient servant.

The French detachment retired without gaining any advantage. 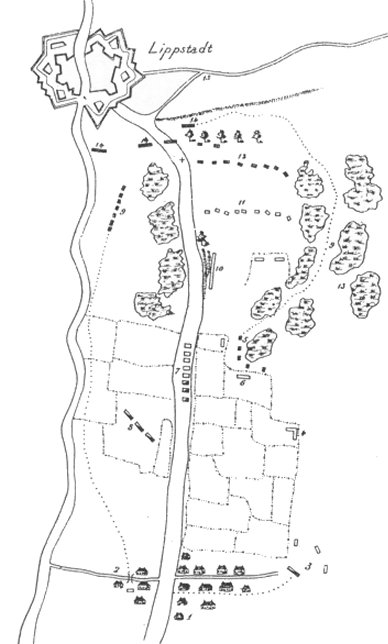 Map of the French attempt on Lippstadt.

1. Lipperode, a village 30 minutes from Lippstadt.
2. Drawbridge on a brook where a piquet of dragoons was placed.
3. French piquet of cavalry of the Volontaires to cover the right flank of the village.
4. French infantry piquet to cover the right flank of the cavalry column.
5. Hanoverian jägers firing at the head of the column.
6. French dismounted piquet of dragoons exchanging fire with the jägers.
7. French cavalry column ready to debouch.
8. French dragoons positioned to support the cavalry.
9. Retreat of the Hanoverian jäger unit on the right and left.
10. French Infantry positioned to support the skirmishers of the infantry as well as of the cavalry.
11. French skirmishers.
12. Hanoverian skirmishers.
13. Marshy terrain.
14. Hanoverian troops.
15. Road to Münster.
+. Place where the conference took place.