At the beginning of June, the Russian army, now under general Piotr Semionovitch Saltykov, had managed to concentrate at Posen (actual Poznań) without any interference from Dohna. Saltykov then proceeded to the invasion of Brandenburg, starting his advance on Crossen (actual Krosno).

By July 17, the Russians had reached the area of Züllichau (actual Sulechów) a few km from the Oder river. Dohna failed to interpose his small army between the Russians and the bridge at Crossen. Frederick II quite upset by Dohna's inefficiency despatched lieutenant-general Kurt Heinrich von Wedel to replace Dohna.

Wedel reached his army in the evening of Saturday July 22.

On July 23 at daybreak, Wedel set out to reconnoitre the ground and to see with his own eyes the army that he was supposed to stop. The heavily wooded area prevented him from seeing very much, but he saw glimpses of stationary troops that he mistook for the Russian left wing while they were in fact the rearguard. This led him to think that the whole Russian army was still idle and that therefore he still had time to outmanoeuvre it. Indeed, the Russians were already on the move to march towards Crossen by Heinersdorf (unidentified location), Nickern (actual Niekarzyn) and Paltzig (actual Palck) to eventually make a junction with an Austrian corps led by Hadik and Loudon.

At 10:00 AM, Wedel returned to the Prussian camp at Züllichau reassured about the intention of the Russians.

However, at 11:00 AM, the heads of the Russian columns began to emerge from the woods in full view of the astonished Prussian left wing in front of the village of Paltzig about 9 km from Züllichau. Wedel was immediately informed but did not believe the report and went personally to observe the Russian troops.

Wedel could not ignore that the king had dismissed Dohna for being too cautious, he was under pressure and he took a step that under different circumstances he probably would never have taken, he decided to attack the Russian army while it was on the march. Some Prussian generals were not sharing his confidence. General Wobersnow pointed out that the enemy was probably 40-50,000 strong with plenty of artillery pieces while their own army could not muster more than 27,000 and “I know not if we can bring a single cannon to where Saltykov is.” (Tempelhof iii 132-134).

Nevertheless, Wedel ordered his troops to march in 2 columns by the left: the first towards Kay (actual Kije) and the second towards Mohsau (actual Mozow). 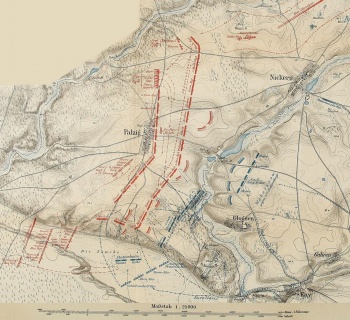 Map of the battle of Paltzig on July 23 1759.
Source: Kriege Friedrichs des Grossen, volume III by the German Grosser Generalstab

The ground separating the two armies was hiding quite a number of unpleasant surprises, first there was a little stream running from Kay to the Oder. The banks of this stream were marshy and it could not be forded. Men could only pass it by using a narrow road leading to a small bridge in the proximity of the mill of Kay. There was also a second brook, a branch of the first one and this time there was no bridge across it.

But now the overwhelming disparity in numbers and artillery made the difference. The Russians skilfully redeployed, shifting reserves from left to right and forming a new line in and around the village of Paltzig.

Manteuffel was wounded and had to fall back with heavy losses. His place was soon taken by Hülsen's brigade (6 bns) which marched forward towards the Russian lines while 20 Prussian sqns advanced on their left along the wood located between Paltzig and Glogsen (probably Glogusz) to turn the Russian right flank and attack it in the rear. However, Hülsen's units attacked piecemeal. This left Saltykov enough time to mass 70 guns in the churchyard of Paltzig, covering his centre. Despite all the efforts of the Russians, the Prussian infantry managed to advance up to Paltzig but it was received with grapeshot and forced to retire with heavy losses, the Russians making good use of the protection of the second stream.

Another charge was launched on the Russian positions by Kanitz with six battalions of the second line. However, the outnumbered Prussians were broken and forced to retire towards Kay.

Around 4:00 PM, a third line of six battalions of the Prussian rearguard, under Wobersnow, advanced against the Russian positions. But now the fight had turned into a hopeless frontal attack with all the Russian guns firing at point blank.

Without artillery support, the Prussians were cut to pieces. Wobersnow was among the dead. Wedel tried a last card and asked Schorlemmer and his four regiments of cuirassiers to deliver a cavalry attack aimed at the southern corner of the Russian line. Some Russian hussars regiments tried to interfere, but they were soon driven back. However, their attack had slowed down the last Prussian charge which had come too late to change the final outcome of the battle.

At 8:00 PM, as the sun was setting down, Wedel finally realised that the battle was lost and gave the order to withdraw.

Wedel took advantage of the night to move behind the defile of Kay and assembled his columns at Mohsau.

The Prussians lost nearly 8,000 men. The works of the Grosser Generalstab indicates losses of only 6,800. However, taking only the Infanterieregiment von Kanitz as an example, it lost 13 officers and 642 men as per Dorn and Engelmann and only 14 officers and 409 men according to the Grosser Generalstab. This tends to indicate that losses were more important than the stated 6,800 men.

Saltykov, who had lost 4,700 men, failed to pursue the retreating Prussian army. His only aim now was to reach the town of Crossen and its bridge on the Oder where he hoped to join forces with the Austrians. But neither Hadik nor Loudon were there waiting for him. Saltykov then marched his troops towards Frankfurt some 70 km further down the Oder where they arrived on July 30.

N.B. Maslowskij mentions that the 5 Russians Cuirassiers regiments totalled 21 sqns (our current order of battle has only 19 sqns of cuirassiers...)

Duffy Ch., The Army of the Frederick the Great, New York 1994

Siemieletnaja wojna, under red. Korobkov H. M., Moskva 1948. (this book has published some documents from the Russian Archives, among which Saltykov's report to empress Elizabeth Petrovna after the battle)

Alessandro Colaiacomo for the entire initial version of this article

Tomasz Karpiński from Gniezno/Poznań for many subsequent improvements