Meanwhile, on August 21, Frederick II had sent a force (about 8,000 men) under the command of Wunsch and Wolfersdorf to relieve Dresden. Arriving at Dresden on September 5, Wunsch realized that the town had just surrendered. When he received a message from his commandant at Torgau, advising him that Saint-André's Austro-Imperial Corps (14,000 men) was upon him and that he could not hold out very long, Wunsch took the road again towards Torgau.

On September 7 in the afternoon, after 2 marches of 32 km each, Wunsch arrived in front of Torgau with part of his corps and took post in the ruins of the north suburb. Realizing that he had to fight Saint-André, he refreshed his men and requested Wolfersdorf, with the rearguard, to join him at Torgau the following day by 10:00 a.m. 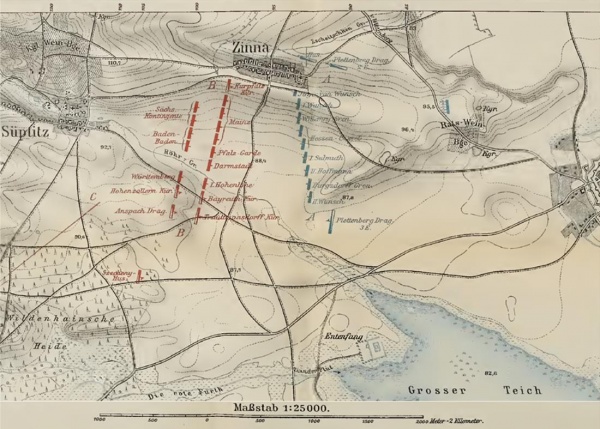 The battlefield was located to the west of the City of Torgau, near its gates. To the south it was delimited by the “Grossen Teich” (big pond) and the heath of Wildenhainsche, which was criss-crossed by several streams flowing into the “Grossen Teich.” To the north, the battlefield extended up to the heights northwest of Zinna and Süptitz; the slopes these heights were covered near Süptitz by the so-called “Royal Vineyards.” These heights then gradually flattened out towards Torgau and sloped more steeply near the western suburbs of the city. The “Ratsweinberg” (Council Vineyards) and several sand pits were located of this slope. Between the “Ratsweinberg” and the “Grossen Teich” and the nearby forest, the terrain was flat and clear. The stream flowing from Süptitz to the “Grossen Teich” had swampy banks in its lower course and constituted a hindrance to troop movements.

The Austro-Imperial troops under FZM Saint-André were encamped to the southwest of the village of Zinna, facing Torgau. Their right wing leaned against the heath of Wildenhainsche and their left wing was located behind the “Ratsweinberg.”

Wunsch had left the Prussian garrison bns defending Torgau behind in the city.

On September 8, Wolfersdorf set off from from Kossdorf at 4:00 a.m. with the rest of Wunsch’s Corps and reached Torgau at 10:00 a.m. After depositing their knapsacks and leaving all baggage behind on the right bank, the troops immediately went over the bridge and through the fortress and paused for a short rest in the burned down western suburbs, under cover of gardens and standing walls, secured by outposts. Wunsch gave each battalion a barrel of wine.

When Saint-André was informed that fresh Prussian troops had entered into Torgau, he sent forward his Grenzer light troops and a few grenadier coys to occupy gardens and ditches on the “Ratsweinberg.” From these vineyards, they fired a few cannonshots against a reconnaissance party of Prussian dragoons, who retired into the suburbs. Saint-André then deployed his troops in two lines in front of his camp, without striking his tents and leaving his baggage there. His right wing was protected by the Röhr Stream. However, this stream was also an obstacle for his right if he wanted to support his left wing.

Saint-André summoned General von Wunsch who refused to surrender. Despite the numerical superiority of his opponents, Wunsch decided without hesitation to attack. He used the suburbs of Torgau to cover the preparation of his troops. Since the Austro-Imperial right wing was anchored on the Wildenhainsche heath and could not be turned, Wunsch opted to attack their left wing while he would refuse his centre and his left, pinning down the Austro-Imperial left wing and centre with his heavy artillery. Wunsch would lead the attack of his right wing while Colonel von Wolfersdorf would command the troops of the centre and of the left wing.

The Prussian artillery opened a lively fire against the grenadiers and the Grenzer light troops occupying the “Ratsweinberg.” Part of them gave way while others took position in sand pits.

Around 2:00 p.m., the two Prussian columns issued from the suburb and formed in a thin single line only two ranks deep to cover as wide a front as possible. On the right wing stood all the hussars and 2 sqns of the Plettenberg Dragoons. The 3 other sqns of the Plettenberg Dragoons were on the left wing. The dragoons too were deployed two ranks deep, thus forming 10 half-strength sqns instead of the usual 5 sqns of the regiment: 4 sqns on the right and 6 sqns on the left. Furthermore, they left larger intervals than usual between each sqn. His left wing reached the “Grossen Teich” and his right was deployed in front of the village of Zinna.

The advance of the Prussian right wing, covered by the cross-fire of the artillery directed against the “Ratsweinberg,” forced the advanced posts of the Austro-Imperials to retire. The Grenadier Battalion Willemey and the I./Wunsch Freibatallion stormed the hill at the point of the bayonet, driving back the Grenzer light troops and the Austro-Imperial grenadiers from the gardens they occupied on the “Ratsweinberg.” The Prussian hussars then pursued the fleeing enemies.

Now that the Austro-Imperial vanguard had been chased from the “Ratsweinberg,” Wunsch lost no time and planted his heavy artillery on this hill.

The effectiveness of the Prussian heavy artillery fire combined with repeated charges of Pogrell’s sqns transformed the retreat of the Austro-Imperial cavalry right wing into a rout. It rode through the ranks of its own infantry, which remained shaken by this sudden rout. Pogrell’s sqns pursued the Austro-Imperial cavalry, capturing a large number of prisoners. The Szechényi Hussars, which were posted at the edge of the Wildenhainsche heath, did not intervene.

Meanwhile, the Prussian right wing, driving the Grenzer light troops in front of them, had come withing musket-fire range and opened against their opponents. The Prussians continued to refuse their left wing. However, their superior artillery very effectively fired at the line of Austro-Imperial infantry.

At this moment, the Prussian cavalry, which had moved around north of Zinna, appeared in the rear of the Austro-Imperial infantry and attacked various spots of their line. Without waiting for the attack of the Prussian infantry, the Austrian-Imperial infantry began to give way and then broke and fled across the Wildenhainsche heath in the direction of Eilenburg, abandoning their camp. Only a few units, namely the Hessen-Darmstadt bn retired in good order, covering the retreat.

The Prussians could not pursue the routing enemy on a long distance, because they had soon taken refuge in the forest. During this combat, most Prussian bns had not fired a single shot!

The victorious Prussians established their camp between the “Ratsweinberg” and the “Grossen Teich.”

Throughout the combat, the Austrian Szechényi Hussars, posted on a wooded hill to cover the right flank, had remained idle.

Austro-Imperial losses are unknown but they certainly amounted to more than 200 men. Furthermore, 11 officers and 595 men had been made prisoners by the Prussians and almost half of them entered into the Prussian service after the combat. The Austro-Imperials also lost all their tents and baggage.

The Prussian dragoons captured 8 battalion guns during this fight.

Wunsch, even though he could not save Dresden, had now recaptured the northern regions of Saxony again. Only Leipzig was still in enemy's hand.