At the beginning of September 1759, a Prussian relief corps under major-general Wunsch had been sent out to counter the Austro-Imperial invasion of Saxony. Arriving too late to prevent the surrender of Dresden, it managed to recapture most of northern Saxony, repulsing an Austro-Imperial force at the combat of Zinna on September 8. A few days later, on September 11, Wunsch was joined by reinforcements led by lieutenant-general Finck. On September 13, Wunsch recaptured Leipzig. On September 19, the combined corps of Wunsch and Finck marched on Meissen.

As soon as general-field-marshal prince Friedrich von Pflaz-Zweibrücken, the commander-in-chief of the Reichsarmee, heard of the movements of these Prussian corps, he threw 16 bns into Dresden and marched with his army to attack them. 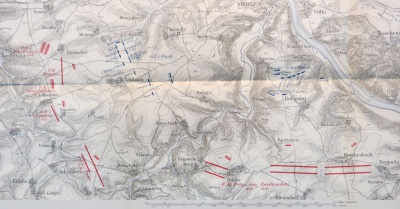 Finck's corps was encamping near Korbitz while Wunsch occupied the heights of Lerchenberg near Siebeneichen on the left.

On September 21 at 10:00 AM, the Reichsarmee attacked Wunsch's positions on the Lerchenberg. Zweibrücken planted several batteries on the heights of Reppnitz and opened a lively but ineffective cannonade on the Prussian positions. Wunsch's artillery replied and the Prussians maintained their positions.

At noon, Hadik attacked Finck, cannonading his positions with 3 batteries.

Finck marched by the right and deployed in front of Hadik's line between Schletta and Korbitz.

Hadik advanced Brentano's corps on the Prussian right. Finck replied by sending Rebentisch with 4 grenadier battalions and Markgraf Carl Infantry against Brentano who was driven back. Rebentisch managed to silence one of Hadik's batteries.

Hadik sent major-general Lamberg with 4 battalions to counterattack. After a bloody firefight, Lamberg was driven back.

At nightfall, the combat ended with the Prussians still holding their positions.

In this affair, the Reichsarmee lost 473 prisoners (including 12 officers) and 1,145 killed or wounded (including 60 officers) along with 11 guns, captured by the Grenadier Battalion 19/25/13/26 Kreckwitz. Marschall Infantry alone lost 18 officers and 338 men.

N.B. This ODB is mostly reconstructed from Etats in the middle August of 1759 including moves and reinforcement during September.

N.B. : during the bloody campaign of 1759, some of the Prussian converged grenadier battalions suffered so many casualties that Prussian commanders had to combine two of them to get battalion strength units.