Since the beginning of October 1759, Field Marshal Daun was trying to gradually drive the Prussian army of Prince Heinrich out of the left bank of the Elbe. Already, by mid-October, by turning the Prussian right wing, Daun had forced Prince Heinrich to retreat from Strehla to Torgau.

Daun was now repeating a similar manoeuvre, hoping to dislodge the Prussians from Torgau and to force them to recross to the right bank of the Elbe. To do so, Daun had despatched several corps around their right wing. Arenberg had taken position at Dommitzsch with a strong corps. He had then been reinforced by Gemmingen’s Corps, while Brentano’s Corps covered his left flank and a new corps under O’Donell was marching on Düben.

Towards the end of October, Major-General Wunsch convinced Prince Heinrich to break the encirclement with an attack against Arenberg’s Corps at Dommitzsch. The plan called for a small detachment under Wunsch to make a junction with Rebentisch’s Corps at Kemberg. Meanwhile, Finck’s Corps would stand ready to launch an attack on Arenberg’s positions from Elsnig. Thus, Rebentisch’s and Wunsch’s forces would attack from the northwest while Finck would advance from the southeast. Together, they would trap and annihilate Arenberg’s Corps.

However, Arenberg was informed of the crossing of the Elbe by Wunsch and of the junction of two Prussian forces to the northwest of his own positions. Daun ordered him to march on October 29 before daybreak towards Kemberg. He also instructed O’Donell to immediately march to Düben to support Arenberg. The two Austrian corps would then attack Wunsch and Rebentisch, drive them back, advance to Wittenberg and clear the left bank from Prussian troops. Arenberg and O’Donell should then send strong detachments to the east bank of the Elbe to cut the supply line of Prince Heinrich’s Army.

During the night of October 28 to 29, based on erroneous reports stating that Rebentisch’s Corps was still west of the Mulde River between Bitterfeld and Leipzig, Arenberg sent O’Donell orders to stop at Düben. O’Donell tried to confirm the report 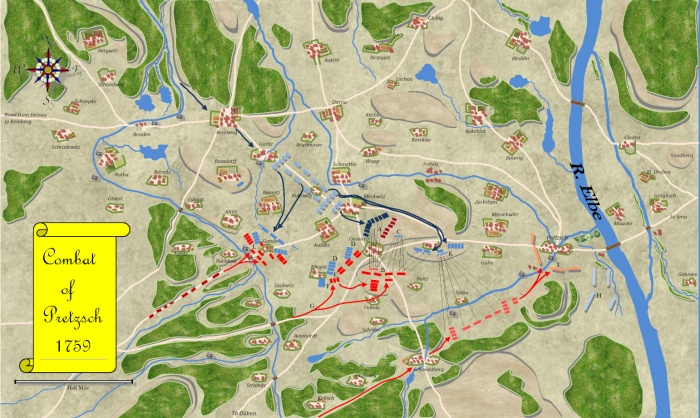 Map of the Combat of Pretzsch - Copyright Dinos Antoniadis

After the Prussian generals Wunsch and Rebentisch had made a junction early on October 29, they marched against the corps of Lieutenant-General Arenberg posted nearby at Pretzsch.

Arenberg occupied the heights in A with cavalry and in B with infantry and cannon. These were soon attacked in A and driven back by the Jung-Platen Dragoons and Zieten Hussars. A (Prussian) battery was immediately established in C.

On October 29 at 3:00 a.m., Arenberg set off from Dommitzsch in two columns and marched towards Kemberg. Gemmingen led the vanguard. Brentano’s Corps, which had been reinforced with Serbelloni Cuirassiers and Saint-Ignon Dragoons , followed the main body to cover the line of retreat. Including Brentano’s Corps, Arenberg was at the head of 16,000 men.

Early in the morning, Wunsch’s detachment and Rebentisch's Corps made a junction at Kemberg, to begin their advance by way of Pretzsch towards Dommitzsch. Together, they numbered 9 bns and 25 sqns.

Early in the morning, when Finck was informed that Arenberg’s Corps had abandoned its positions at Dommitzsch. He sent Major-General von Krockow with the Normann Dragoons and 2 grenadier bns to follow the enemy. Prince Heinrich soon followed with the rest of Finck’s Corps.

In the morning, O’Donell finally received confirmation that Rebentisch’s Corps had in fact set off from Bitterfeld and marched towards Kemberg.

Rebentisch and Wunsch were approaching the village of Merkwitz, to the southeast of Kemberg, when hussars informed them that they had spotted an enemy column near Pretzsch. Wunsch sent Jung-Platen Dragoons with their Horse Artillery battery forward beyond Merkwitz. Protected by the Jung-Platen Dragoons, Lieutenant Schwebs deployed his light guns behind a hillock to the west of the road leading to Pretzsch. These guns immediately opened on the Austrian cavalry which could be seen deploying near Oesteritz.

Soon afterwards, the Württemberg Dragoons and the Freibataillon Salenmon arrived at Merkwitz. The latter occupied the village while Rebentisch marched across Merkwitz with the infantry and deployed it in two lines to the southeast of the village.

During this time, Prince Heinrich followed Krockow with the rest of Finck’s Corps. The sound of the guns could soon be heard to the northwest. Evidently, Arenberg’s Corps had encountered Rebentisch and Wunsch and was now caught between two Prussian forces.

Around 11:00 a.m., O’Donell too could hear the sound of the guns. He immediately marched towards Kemberg.

Near Pretzsch, Finck’s vanguard found his way blocked by Brentano’s Corps and opened on its cavalry with its battalion guns. Finck’s main body accelerated its march.

Arenberg deployed his infantry south of Meuro. However, overestimating the size of the Prussian forces deployed near Merkwitz, he did not dare to launch an attack against it. Fearing to have his position turned from the west and his line of retreat cut, Arenberg hastily marched across the heath towards Düben.

For his part, Brentano managed to retire from Schmiedeberg to Düben without significant losses, before Finck's Corps could overtake him.

Jung-Platen Dragoons and Gersdorff Hussars attacked the Austrian cavalry frontally, while Major von Lossow with 3 sqns of Möhring Hussars fell on their right flank. The Austrian cavalry broke and routed, throwing themselves into the ranks of their infantry, part of which had already reached the edge of the forest.

The routing Austrian cavalry fled and the Prussian cavalry, supported by Freibataillon Salenmon advanced to catch up with Gemmingen’s infantry.

Gemmingen had sent Colonel Haller at the head of his vanguard (2,000 men) to occupy the heights of the Sackwitz wood to cover his retreat. However, Haller's detachment had not yet reached the summit when Jung Platen Dragoons along with Prussian hussars appeared on the crest. The Prussian cavalry immediately charged the Austrian infantry and drove them back. FML Gemmingen, who had been wounded, surrendered as prisoner to Captain von Franckenberg of the Jung-Platen Dragoons.

As O’Donell was approaching Düben with his corps, he met runaways on the heath, who informed him of Arenberg’s defeat. He was only an hour’s march from Kemberg, when he turned back and retired towards Düben.

Rebentisch and Wunsch encamped near Meuro, while Finck encamped at Pretzsch and Dommitzsch.

In this action, the Austrians lost 24 officers and 1,276 men taken prisoners (several of them joined the Prussian service). Jung Platen Dragoons captured a gun, 7 ammunition wagons and a large quantity of baggage. The Prussians lost only 3 officers and 105 men killed or wounded.

Frederick would later promote Colonel von Gersdorff to major-general for his conduct in this combat and in the action at Hoyerswerda on September 25.

O’Donell’s Corps (near Eilenburg, did not take part in the engagement)