From July 1759, Austro-Imperial forces proceeded to the invasion of Saxony, capturing Dresden and several other cities. Prince Henri soon led a counter-offensive which allowed him to retake possession of most Saxon towns to the exception of Dresden.

On November 13, Frederick II arrived from Silesia where he had operated against a Russian army (see operations in Lower Silesia in 1759) and made a junction with the corps of Prince Henri. Count Leopold Daun, the commander-in-chief of the Austrian forces, gradually retired towards Dresden, closely followed by Prussian forces.

On November 15, Frederick detached Finck's Corps to Maxen to cut off the communications of the Austrian Army with Bohemia. However, this manoeuvre placed Finck in an isolated position. Daun resolved to encircle and attack Finck's isolated corps. 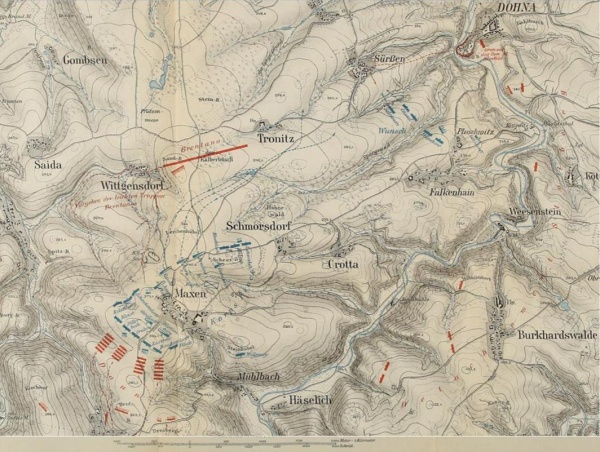 On Monday November 19 at 7:00 a.m., O'Donell's corps, personally led by Daun, quitted Rupchen (unidentified location) and marched directly on Dippoldiswalde. The movement was initially hidden by a heavy fog. When the fog lifted, Finck resolved to detach Platen with 5 bns and 5 sqns to occupy Rheinhadrtsgrimma on the Heights of Hausdorf. A bread-convoy reached Finck's positions and was able to safely get home, though under annoyances from cannonading in the distance. Finck, from his observation post on a hilltop, saw Daun's vanguard approaching Dippoldiswalde and cannonading his meal-carts. All that day, Finck did his best to prepare his corps and saw his numerous enemies settle round him. Finck completely ascertained where the enemy's three attacks were to be: from Dippoldiswalde, Tronitz and Dohna. Daun, with his main force of 27,000 men, took camp on the Heights of Malter near Dippoldiswalde with his left at Oberhäslich while Stolberg took position at Burkhardswalde on the eastern side of Maxen with 7 bns and 5 sqns. Daun also threw 3 bns into the town of Dippoldiswalde. Once his army safely encamped, Daun returned to Dresden for the night to see if Frederick II had undertaken any manoeuvre. Meanwhile, Finck prepared his positions for defence. Wunsch was left on the Heights of Bloschwitz (unidentified location) with 5 bns and 3 sqns to contain the Reichsarmee. The rest of Finck's Corps deployed in a crescent shaped line around Maxen. Its line extended from Muhlbach to the Heights of Wittgensdorf. Lindstädt, who had retired from Dippoldiswalde in front of the approaching Corps of Sincère, now covered the right of the Prussian positions with 4 bns on the Heights of Schmorsdorf.

On November 20 at 7:00 a.m., the Austrians quitted their encampment near Dippoldiswalde and marched in 4 columns: 2 infantry columns in the centre and 2 cavalry columns on the wings. The advanced guards consisted of the Szechényi Hussars with some squadrons of carabiniers, some Grenzer ligth troops and a grenadier brigade of 5 bns. Seckendorf with a small detachment was left behind on the Heights of Malter to cover the rear of the Austrian lines.

Daun, accompanied by the two Saxon princes Albrecht and Clemens, repaired to Sincère's Corps as the head of the columns reached Reinholdshain.

Daun deployed Sincère's Corps in 2 lines near Rheinhadrtsgrimma and reconnoitred the Prussian positions. Daun also instructed Brentano to advance from Röhrsdorf. The Prussian had occupied Rheinhadrtsgrimma with 3 hussar sqns. General Platen was posted behind the village with 2 bns where there was a narrow gullet overhung with heights all round. Furthermore, the gullet was rendered very difficult by the frost and some little snow. The heights were steep and extremely slippery. Many thought that it was impossible to proceed with the artillery and cavalry, particularly as the horses were not rough shod.

When Finck was informed of the Austrian advance, he ordered Platen to retire behind Hausdorf.

Daun sent the Szechényi Hussars, some grenzer light troops and one grenadier battalion against the Prussian occupying Rheinhadrtsgrimma. These troops soon drove Prussian troops from the first heights on the other side of the gullet. Meanwhile, Major Fabri, an Austrian engineer, had assured Daun that the gullet behind Rheinhadrtsgrimma was difficult but practicable.

Finally, Daun ordered the 4 columns forward towards Maxen. The Austrian grenadiers of the advanced guard passed the gullet near Rheinhadrtsgrimma and immediately gained the neighbouring heights. Daun followed them and reconnoitred the Prussian positions. He then halted the grenadier battalions just before they reached the summit of the hill to keep them under cover.

General Finck had occupied the Heights of Maxen with 3 bns, 4 howitzers and 5 12-pdr guns. Platen was at Hausdorf with 2 bns, Münchow Fusiliers between Maxen and Schmorsdorf, Dossow Fusiliers on the left of the Prussian line and the rest of the Prussian Corps was drawn up facing north against Brentano. On the little round hill on the right of Maxen, there was a Prussian battery of 4 6-pdr guns. Two other Prussian batteries (2 12-pdr guns each) were opposed to Brentano's Corps.

Captain Schroder of the Austrian artillery brought up 8 12-pdr on to the height where the Austrian grenadier battalions waited. Daun then established a battery who covered the deployment of his army, playing on the Prussian left flank and doing great execution.

Around 11:00 a.m., Platen gradually retired towards Maxen while the Prussian troops on the other side of Maxen fronted against Brentano's Corps which was advancing from Röhrsdorf.

Soon afterwards, the 5 Austrian grenadier bns of the vanguard closely followed by the other troops resumed their advance in columns of battalions out of the wood, with their cavalry in column of squadrons on their left, and began to form. Daun ordered 8 howitzers and 6 6-pdrs to be brought up on to the height to the right. He also formed a battery of 25 guns which soon opened against the Prussian lines. Meanwhile, Brentano had reached Wittgensdorf and was cannonading Finck with 8 8-pdrs. The cannonade continued for about 45 minutes and then Daun ordered the grenadiers to attack.

General Sisckowitz with the 5 Austrian grenadier bns of the vanguard, supported by d'Aynse's and Dombasle's Brigades, attacked the Prussian line on the heights in front of Wittgensdorf and Maxen. They drove back the battalions of Zastrow Fusiliers and Grabow Fusiliers, who retired in confusion, broke through the Prussian line and entered into the village of Maxen.

Around 3:00 p.m., Daun's corps deployed with its right on the heights in front of Muhlbach and its left towards Hausdorf.

Meanwhile, Brentano was extending his line behind the Prussian positions. His attack was now becoming more and more serious and Finck ordered his 15 cuirassier sqns to advance against them. During their advance, the Prussian cuirassiers were obliged to move across difficult terrain. When they finally attacked they were defeated and retreated in confusion. Brentano then resumed his advance.

Finck collected his broken troops as well as he could and made General Lindstädt form them and face the Austrians near Schmorsdorf.

Daun reformed his lines on the heights of Maxen and linked his left to Brentano's positions. The Austrians then renewed their attacks against Finck's troops and routed them, taking most of their pieces and several colours.

Palfy and Kleefeld managed to pass the ravine with their light troops. Palfy then ordered the Splényi Hussars to fall on the flank of Finck's retreating corps. Palfy and Kleefeld then made a junction with Bretano's Corps, thus enclosing Finck's Corps on that side. Two Austrian cavalry regiments were sent towards the Elbe to prevent the Prussians getting off on that side.

During the whole affair, Wunsch remained in his post near Bloschwitz, cannonading Stolberg's Brigade which had advanced up to Burkhardswalde with his 2 batteries (each of 2 12-pdr guns).

Finck retired on the heights behind Falkenhain with the remnants of his infantry to join Wunsch who had repulsed the attacks of the Reichsarmee.

As night came, Finck was completely surrounded on all sides by enemy's troops and artillery. Daun formed his troops on the heights that he had gained and remained the whole night under arm. During the night, the Austrians received a fresh supply of ammunition from their camp at Plauen. Daun received a report from Seckendorf, left behind at Malter, that his piquets had come to contact with Prussian troops (elements of Kleist's detachment returning from a raid in Bohemia). Daun immediately ordered Seckendorf to defend the defile of Dippoldiswalde to the last. He also sent 6 bns and 2 cavalry rgts, under the command of Lieutenant-general Blonquet, to Hausdorf to support Seckendorf. Finally, Daun sent instruction to Buccow, who assumed command at Plauen in his absence, to detach Lieutenant-general Angern with 4 bns to Rupchen and to strengthen this post.

During this time, Stolberg's Brigade was reinforced by Pfalz Effern (2 bns), II./Kurpfalz Garde zu Fuß (1 bn) and some heavy artillery.

Meanwhile, Finck planned to cut through the Austrian lines by Schmorsdorf. He ordered to have the troops supplied with ammunition. However, once deducted the units already captured by the Austrians, Finck could only count on a meagre force of 2,836 men to accomplish this task. Realising how impossible his plan was, Finck resolved to send his cavalry away under Wunsch, hoping that it could break through the Reichsarmee contingent near Sirfen at daybreak.

On November 21 at 3:00 a.m., Wunsch departed with the cavalry. Then Fick sent Rebentisch to negotiate the capitulation with Daun.

An hour before daybreak, Daun ordered the artillery as far forward as possible and instructed his grenadiers to be ready to launch a new assault at daybreak. About the same time, Rebentisch arrived at the most advanced Austrian piquet to speak to the commanding general. Daun sent Lacy to meet him.

The Austrian grenadiers had already started to cannonade the Prussian positions when Lacy returned with the information that Finck's Corps had surrendered as prisoners of war. Daun ordered his grenadiers to cease fire.

When he heard of the Prussian cavalry attempt to escape, Daun insisted that Finck should include these 6 cavalry rgt in the capitulation. Finck replied that Wunsch commanded a separate corps for which he could not possibly capitulate. Lacy threatened that the cannonade would immediately begin again if the troops under Wunsch did not return. Informed that Wunsch was making no progress anyway, Finck finally signed the capitulation of his entire force, including his cavalry.

The Prussian prisoners were escorted to the great garden of Dresden.

The Austro-Imperial forces lost 984 men in this action.

Frederick condemned Finck, Rebentisch and Gersdorf to 2 years of detention.

Order of battle listed from right to left

Sincère's Corps advancing from Dippoldiswalde to the west of Maxen

Detachment on the heights of Malter near Dippoldiswalde, under the command of Major-General Baron Seckendorff

N.B.: some of the Grenzer light troops present came from the following units:

Order of battle listed from right to left

Artillery deployed in several batteries across the front