Late in November 1759, the contingent of Württemberg (about 10,000 men), led personally by Duke Karl Eugen of Würtemberg, entered the Country of Fulda and took up its winter-quarters in this province to assist the French army. As instructed by the Duc de Broglie the contingent was now in a position to threaten the Allied left flank and to deny them supplies from this area. A detachment of about 1,000 French light cavalry took post at Lauterbach and Herbstein, between the Württembergers and the Allies.

To improve the safety of his contingent, Karl Eugen sent 1 bn along with Phull Cuirassiers forward, between Fulda and the two French held places. As this area was thought most important, General von Wolff was detached to Hersfeld with 4 bns, 1 sqn of Leib-Grenadiers à Cheval, 1 sqn of Roeder Dragoons and most of Gorcy Hussars. These troops were posted along the Fulda River where they formed a cordon to protect the quarter of the Württemberger army, with each patrol in close touch to one another. General von Augée was placed with a brigade along the Werra River. Both detachments denied all supplies to the Allies from these areas and the province was put under contribution. Near Rothenburg, there was an Allied party of some 800 men and near Wanfried some 500 Allied hussars, engaging into daily skirmishes with the Württembergers.

Ferdinand of Brunswick decided to send a corps (7 bns, 12 sqns) under the command of the Hereditary Prince of Brunswick to dislodge this contingent from Fulda and prevent its junction with the main French army.

On November 28 in the morning, the Hereditary Prince’s Corps set out from Marburg and marched to Kirtorf. The same day, Broglie informed the Duke of Württemberg that he had received a report mentioning that an Allied corps was on the march towards Fulda since November 26. However, the duke did not change the deployment of his troops.

On November 29, the corps of the Hereditary Prince marched to Angersbach and Lauterbach. His vanguard repulsed a detachment of the Royal-Nassau Hussards.

The same day at 6:00 p.m., Karl Eugen received confirmation of the approach of the Allies. The French Brigadier von Nordmann, commanding a detachment of some 500 dragoons and hussars, informed him that the Allies now occupied his former position at Lauterbach. He had been forced to retire to Schlitz and even across the Fulda River.

Karl Eugen asked to Comte de Gréaulme, aide maréchal-des-logis of Broglie's Army and attached to the Württemberger staff as liaison officer, to order Brigadier von Nordmann to recross the Fulda and to take up a position between Lauterbach and Fulda, this town giving him a safe line of retreat, if necessary. He also instructed Lieutenant-Colonel von Wurmser to advance to Schlüchtern with the Royal-Nassau Hussards to cover his line of retreat towards Gemünden by way of Brückenau.

Furthermore, Duke Karl Eugen sent orders to his two generals (von Wolff and von Augée) to leave their quarters and assemble at Fulda during the night. 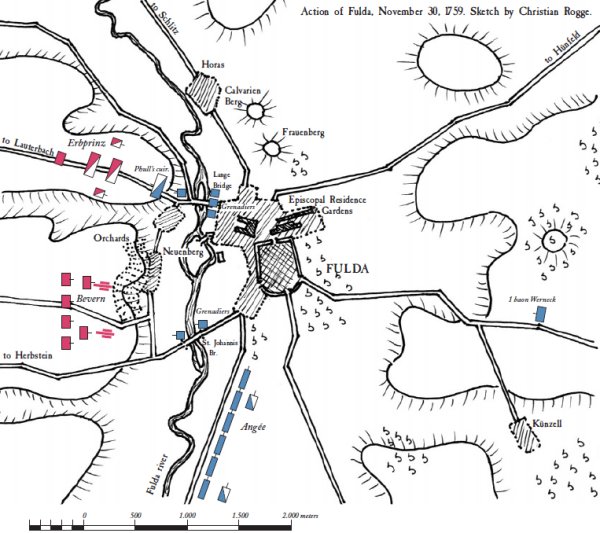 Sketch of the action of Fulda.

Fulda, a town with some 7,000 inhabitants by the late 18th century, is located in a quite even plain watered by the Fulda River. To the west of the town towards the river, the fields were divided by a long sunken road. The Württemberger Contingent had encamped very irregularly in small bodies on separate spots of ground on one side of this sunken road. The left (west) bank of the Fulda provided some rising ground commanding the bridges and the right bank. The 3 Württemberger grenadier bns were posted in Fulda, but a few companies had been detached to occupy the fortified bridge of Fulda and the stone bridges at Neuenberg and Kohlhaus. The Phull Cuirassiers were posted west of Fulda near Oberbimbach.

On November 30 at 1:00 a.m., the corps of the Hereditary Prince advanced directly from Landenhausen towards Fulda. It met no troops on the road. A little distance from Fulda, the Allied forces deployed behind a height while their hussars marched forward.

The Hereditary Prince then reconnoitred almost to the gates of the town.

At 9:00 a.m., after skirmishing with the Allied avant-garde, the Phull Cuirassiers were forced to retire from Oberbimbach back to the bridge in front of the town of Fulda.

Around 9:00 a.m., the vanguard of the Hereditary Prince reached the Schulzen-Berg, to the northwest of Haimbach. From this height, the Hereditary Prince could see a line of infantry deployed on the heights bordering the Fulda River to the west of the bridge of Fulda. These were the 3 Württemberger grenadier bns and the Phull Cuirassiers. Squadrons were separated by wide gaps. The cuirassiers fired with their pistols on the skirmishing Prussian and Hanoverian hussars. Other bns could be seen hurriedly marching from the south towards Fulda along the road in the Fulda Valley.

Karl Eugen realised that he was on the point of being attacked by an Allied corps of no less than 8,000 or 10,000 men while he had no more than his 1,200 grenadiers and Phull Cuirassiers at Fulda, the rest of his force being dispersed in various detachments. The duke now had two options. He could march towards Hersfeld and make a junction near Hünfeld with his approaching detachments and then withdraw towards Saxony and join the Reichsarmee. His other option was to hold his ground, defend the bridges with his force as long as possible and await the arrival of his approaching detachments. He decided for the latter option.

The Württemberger grenadiers, along with a number of 3-pdrs guns, were ordered to occupy the three stone bridges near Fulda (at Fulda proper, Neuenberg and Kohlhaus). One company was ordered to cross the river to support Phull Cuirassiers. Led by General von Gorcy, they charged in close order the Allied dragoons and hussars, gaining some time. By engaging into further skirmishing, they managed to delay the Allied advance until around 1:00 p.m..

During this time, the Hereditary Prince let his cavalry advance between Haimbach and the Schulzen-Berg. He also ordered Prince Karl von Bevern to march with the infantry by way of Haimbach towards the heights located to the southeast of this village. From this position, he would be able to attack the flank of the Württembergers. As Bevern led the Allied infantry to its assigned positions, the battalion guns of the Württemberger grenadiers fired a few shots.

Meanwhile, the Allied had deployed infantry and a powerful artillery on the heights on the left bank of the Fulda.

By 1:00 p.m., the Phull Cuirassiers were forced to abandon their positions and to withdraw over the river while the Württembergers grenadiers, although being under a murderous cannon fire, held the bridges for some time. However, the grenadiers were eventually recalled into the town in order to prepare its defence. The gates were then closed.

The Prince von Bevern then turned his attention to the bridge near Neuenberg south of Fulda, which was defended by a detachment of grenadiers.

The Württemberger infantry started to form in the town square but Allied howitzers drove them away. Seeing that the Württembergers were exiting the town on the opposite side, the Hereditary Prince led the hussars, Prinz Friedrich Dragoons, Hessian Grenadier-Regiment and Bock Dragoons against the bridge of Fulda.

Duke Karl Eugen then marched through Fulda with these troops, and formed up in line of battle on the right bank of the Fulda River. The duke had also sent the Truchsess Fusilier to guard the bridge of Löschenrod and thus cover his retreat.

However, when the 2 grenadier coys defending the bridge near Neuenberg gave way after a few cannon shots by the Allies and the Prince von Bevern crossed over with his infantry, the Duke immediately retired southwards in the direction of Bronnzell.

With the retreat of the duke, the garrison of Fulda (some 550 grenadiers) and the rest of his troops still advancing from the direction of Hersfeld found themselves isolated.

The Allied artillery damaged the city gate with a few cannon balls and then the carpenters of the Hessian Grenadier-Regiment broke the gate open. The Hereditary Prince then entered Fulda.

6 Württemberger grenadier coys under Colonel von Pöllnitz, which had seen their retreat southwards blocked by the Prince of Bevern, withdrew to northeastwards in the direction of Petersberg. There they joined 6 coys of a late arriving battalion of Werneck Infantry. Together, these troops formed in order of battle, under the command of Baron von Pöllnitz, on the opposite side of the town to contain the Allies during the retreat of their main body.

The Hereditary Prince sent 4 sqns to follow the Duke of Württemberg. He then advanced against the 12 Württemberger coys deployed at Petersberg with 6 sqns (the hussars, 3 sqns of the Bock Dragoons and 1 sqn of the Prinz Friedrich Dragoons) while Bevern gained their flanks. The Allies then attacked these units, which tried to make good their escape. Closely pursued by the Allied cavalry and under continuous cannon and musketry fire, they lost a great number of men. Eventually, what was left of these units was forced to lay down their arms and surrender.

Now all bridges were in the hands of the Allies. Duke Karl Eugen ordered General Wolff, who was still on the march from Hersfeld with 4 bns (Prinz Louis Infantry, Romann) and 5 sqns (Gorcy Hussars, 1 sqn of Leib-Grenadiers à Cheval, 1 sqn of Roeder Dragoons), to redirect his march towards Hünfeld

The duke’s force had now been reduced to the Phull Cuirassiers, Leib-Grenadiers à Cheval (3 sqns), grenadiers (6 coys) and 7 bns. He directed his retreat to Motten, an hour march from Fulda. During the retreat, the duke formed his troops in line of battle at one time, in order to keep the pursuing enemy at a distance. General von Goren (maybe Gorcy), commanding the grenadiers of his rearguard engaged the pursuers.

On December 1, Duke Karl Eugen resumed his retreat to Brückenau to take up supplies as well as to support General Wolff’s retreat, the latter being now at Bischofsheim.

Guarding the baggage (did not take part to the action)

At Fulda at the beginning of the action (3 bns, 4 sqns)

Detached to guard the bridge of Löschenrod

At Neuhof, some 12 km to the southwest of Fulda

Wolff’s Brigade (4 bns, 5 sqns) did not take part to the action, still being on its way to Fulda

N.B.: the French detachment did not take part in the action

This article incorporates texts from the following books or documents which are now in the public domain: