After his failed attempt to capture Frankfurt and his defeat at the battle of Bergen, Ferdinand of Brunswick had gradually retreated northwards, reaching Ziegenhain some 30 km from Fritzlar by April 23. He would remain there until May 15.

French Invasion of the Weser Countries

On April 25, Maréchal Marquis de Contades arrived from Paris at Frankfurt and announced that, according to the operation plan established in Versailles, he would reduced Broglie’s Army of the Main to only 20,000 men. Contades' main army was encamped near Neuwied, Deutz, Düsseldorf, Büderich, Kalkar and Arcen (on the Meuse). He planned to advance from the Rhine into Westphalia, without taking into consideration Broglie’s victory at Bergen nor Ferdinand’s advance into Hesse. Contades established his headquarters at Düsseldorf.

The Minister of War Belle-Isle planned to merge the Army of the Main with Contades’ main army between the Main and Lahn rivers. This army would then advance into Hesse in the direction of the Weser. He hoped that such a movement would threaten Ferdinand’s lines of communication with Hanover and thus force him to evacuate Westphalia. The small fortresses of Westphalia would then become easy prey for the French armies. According to this plan, Lieutenant-General Marquis d’Armentières was left on the Lower Rhine with the “Left Reserve” of the main army (18 bns, 20 sqns), with instructions to advance on Münster and Lippstadt.

In May, Enghien Infanterie (2 bns) was transferred to the Army of the Rhine as reinforcements. Meanwhile, 14 sqns and some bns returned to France.

On May 2, Contades quitted Frankfurt.

Broglie took leave of absence because of health problem and Lieutenant-General Chevalier de Muy temporarily replaced him at the head of the “Right Reserve” (the former Army of the Main). Before leaving, Broglie had sent the Chasseurs de Fischer towards Wertheim and Mittelberg and the Volontaires d'Alsace to Lohr am Main to hinder the Allied manoeuvres in Franconia.

At about this time, a letter from Ferdinand of Brunswick to the British Secretary of State William Pitt was intercepted by the French. In this letter, Ferdinand mentioned that after his defeat at Bergen and the ensuing retreat, his infantry had lost a third of its effective without possibility to recruit fresh troops and that his cavalry was all but destroyed. Ferdinand asked for a reinforcement of 10,000 British infantry. Indeed, at Ziegenhain, Ferdinand had received intelligence that the French planned to advance from the Rhine against Münster. He decided to assemble most of his army in Westphalia.

By mid-May, Urff’s Corps, which had taken part in the Prussian incursion in Franconia, was back in Hersfeld. 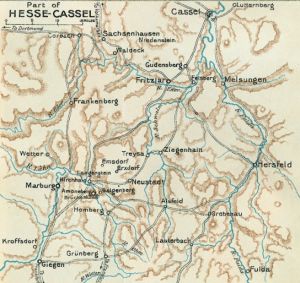 During the night of June 6 to 7, the Hereditary Prince surprised a French force of 1,000 men near Duisburg and captured most of them.

Torcy, the governor of Cologne, broke his bridge on the Rhine and brought artillery pieces on the walls. D’Armentières dispatched reinforcements to Cologne and Düsseldorf and assembled his corps near Ürdingen east of Krefeld. However, Contades had not been lured and had remained in his positions. The Hereditary Prince had to precipitously rejoin the main Allied army.

During the night of June 7 to 8, Imhoff retired from Fritzlar to Kassel, sending the pontoons, artillery and hospital to Minden.

During the night of June 13 to 14, Turpin Hussards, along with 1 rgt of light troops, approached the camp of Büren to observe the Allies, some skirmishes took place.

On June 14 or 15, indecisive skirmishes took place in the vicinity of Leiberg and Wünnenberg between the light troops of both armies. The Luckner Hussars and Freytag Jägers attacked the Volontaires of Château Thierry, Turpin Hussards and Volontaires du Dauphiné.

On June 21, Ferdinand wrote to King Frederick II of Prussian to get new instructions.

The French army remained in these positions for a few days. Ferdinand was still unsure about Contades' intentions.

On June 26, French light troops drove the Freibataillon Trümbach out of Boke and tried to surround them in Delbrück.

By July 1, Contades army totalled 129 bns and 138 sqns, and consisted of the following corps:

In the night of July 10 to 11 at Münster, d'Armentières made himself master of the suburb of Sankt Mauritz.

In fact, Contades had no intention to cut the Allies from Hanover, he rather wished that they would cross the Weser and thus leave Hesse and Westphalia defenceless.

In the night of July 14 to 15, Major-General von Dreves arrived before Bremen.

On July ??, Saint-Germain rejoined the main army, leaving only 4 bns and 2 sqns at Schwöbber.

Contades intended to wait in these positions until Münster and Lippstadt would be captured by the troops of d’Armentières and Chevreuse.

The Allies were still in a difficult situation: the Chasseurs de Fischer raided the country up to the City of Hannover; the Volontaires du Dauphiné did the same towards Nienburg; Chevreuse blockaded Lippstadt; d'Armentières besieged Münster; and Broglie, from Bückeburg, threatened the Allied line of communication with Hanover.

On the night of July 17 to 18, Broglie’s Right Reserve, which had recrossed the Weser to join the main French army, passed it again and encamped on the east bank of the river with his right at Meinsen and his left to the Weser near the bridges of boats at Neesen. A small detachment occupied the Castle of Bückeburg.

Contades hoped to fix Ferdinand while his detachments accomplished their various missions. So far Contades's campaign had been almost flawless. He had taken Kassel, the capital of Hesse, and had invested Lippstadt and Münster. Furthermore, he had taken Minden on the Weser and invested Hameln. He was now in a good position to control the Weser and, as soon as this would be done, to invade Hanover.

Ferdinand's position was now critical. With Contades fixing his army while remaining in an impregnable position, Ferdinand could hardly make any serious attempt against the French forces investing Lippstadt, Münster and Hameln. Indeed, Contades' army lay immediately to the south of Minden, communicating by three bridges with Broglie's corps on the other side of the Weser. Contades' right rested on Minden and the Weser, and his left on wooded hills while his front was covered by a wide morass traversed by the Bastau brook. However, the position, strong as it was, did not allow his army to move easily in all directions. Furthermore, the protection of the lines of communication between Minden and the French base at Kassel required to maintain strong detachments in the areas of Gohfeld and Herford. Ferdinand decided to gradually establish advanced posts in the villages in front of his position. His army counted 50,800 men (39,170 foot, 11,630 horse) excluding light troops.

By July 19, the French armies (a total of 129 bns and 138 sqns) were deployed as follows in Western Germany:

On July 19, Allied piquets were posted at Stemmern and Holthausen. At night, they attacked French hussars at Hille, capturing 40 of them.

On the night of July 19 to 20, d’Armentières opened the trench on the northeastern face of the fortifications of Münster. He also established two batteries against the fortifications, which were located between the Neubrücker Gate and the Hörter Gate.

On the night of July 20 to 21 at Münster, with the arrival of his heavy artillery from Wesel, d’Armentières established batteries to fire on the western side of the citadel. Two additional batteries were established south of the flooded area to take the defensive works in reverse.

Ferdinand decided to threaten the line of communication of the French army. This line reached Minden by way of Herford. Ferdinand hoped that such a threat would induce Contades to move out of his unassailable positions behind the moors or to offer battle.

Prelude to the Battle of Minden

A party at the French Court and in the French camp wished to replace Contades by Broglie at the head of the army. This party objected to Contades’ passivity. Furthermore, Belle-Isle, the minister of war, was urging Contades to make progress and to tap into the resources of Hanover and Brunswick to alleviate the burden of the war on the finance of the kingdom.

Contades, ignoring the dispositions taken by Ferdinand, considered that the Allied army was dispersed: the Hereditary Prince was at Herford with 10,000 men, 2,000 more were at Lübbecke, Ferdinand was at Hille with the greater part of the army, and Wangenheim had detached part of his 10,000 men across the Weser. In these conditions, Contades’ Army enjoyed a vast numerical superiority over Ferdinand’s Army. With his lines of communication with Paderborn and Kassel threatened, it looked very tempting for Contades to engage a battle against Ferdinand without waiting for the capture of Lippstadt by d’Armentières.

Similarly, Frederick was urging Ferdinand to attack the French.

The Allies now had the initiative and proceeded to a general counter-offensive in Western Germany which by the end of the year had driven back the French to the positions that they had occupied at the beginning of the campaign.