Difference between revisions of "1759 - Prussian incursions behind enemy lines"

The campaign lasted from February to May 1759

Frederick II spent the winter of 1758-59 in Breslau (present-day Wroclaw). During the previous campaigns, he had lost a large part of his veterans. The quality of his army was now deteriorating through the adjunct of new levies and recruits. To compensate for this, he decided to improve his artillery.

From February onwards, several incursions were launched against French, Imperial, Austrian and Russian magazines to cripple their future operations.

Incursion in Thuringia against the Reichsarmee

By January 13, the Reichsarmee and its Austrian auxiliaries had advanced into Thuringia and Franconia, and reached Erfurt where they took post, formed magazines and strengthened the fortifications. This army then extended its positions into the duchies of Saxe-Eisenach, Saxe-Coburg, Saxe-Gotha and the district of Fulda.

At the beginning of February, General d'Arberg, at the head of an Austro-Imperial corps of 12,000 men, entered into the country of Hesse and seized the bailiwicks of Schmalkalden, Vacha, Friedewald and Landeck, and the Principality of Hersfeld, taking post between the Fulda and the Werra. Meanwhile, the French sent Fischer's Corps towards Marburg. The right wing of the Reichsarmee was now at Hof and Asch (present-day Aš in Bohemia) and its left, reinforced by an Austrian corps, in Fulda country from Meiningen to Vacha.

Prince Ysenburg had a meeting with the Hereditary Prince of Brunswick near Kassel to decide on the Allied plan. They sent light troops towards Hersfeld and another detachment to Allendorf on the Werra to observe the movements of the French in these areas. Reinforcements were sent to the Bishopric of Paderborn and the headquarters were moved from Fritzlar to Naumburg. Furthermore, the Allies threw bridges on the Fulda above Kassel.

On February 16, observing that the Austro-Imperial army was fortifying Erfurt, Prince Henri of Prussia sent a detachment of his forces in Saxony under Major-General Friedrich Wilhelm Erhard von Knobloch against them. Duke Ferdinand also contributed 4,000 men to this combined expedition.

On February 27, a Prussian detachment (6 bns and 3,000 horse) under Knobloch arrived at the gates of Erfurt and summoned M. de Guasco who capitulated under the condition that Gaisruck Infantry would continue to occupy the citadel while the rest of the garrison would retire southwards to Arnstadt. Additionally, 3 other Prussian columns under the command of Prince Henri were ready to operate in Hesse and on the Main.

On March 2, Kleist arrived at Eisenach while another Prussian detachment marched towards Schmalkalden and Vacha. D'Arberg was obliged to retire from the heights of Vacha to Dernbach.

On March 3, d'Arberg retired to Kaltennordheim while Kolb, who previously occupied Eisenach, retired to Meiningen.

On March 4, Lieutenant-Colonel Wunsch with 300 men attacked and dislodged an Austro-Imperial party near Frauenwald, capturing 4 grenadier coys and forcing the rest to retire northeastward to Camburg in Franconia.

These manoeuvres led the Austro-Imperials to entirely abandon Hesse and to retire to Meiningen in the country of Bamberg.

At the end of this expedition, the Prussians retired from Eisenach and Thuringia towards Saxony.

On March 12, the Austro-Imperial army was advancing anew towards Hesse. It had left a strong body near Erfurt to observe the Prussian army of prince Henri. FML Count Arberg at the head of 4,000 men captured Vacha, occupied by Hessian troops. Afterwards, Colonel Baron Vécsey marched towards Hersfeld with an Austrian detachment.

On March 15 in the morning, Vécsey's detachment arrived in front of Hersfeld. The Hessian garrison retreated to Kassel but was intercepted by Vécsey's cavalry near Fulda and virtually annihilated. In this affair, the Hessians lost their 4 guns and 35 men taken prisoners. Vécsey also captured the nearby Castle of Friedewald.

Thus, the Allies had been forced to retire in front of superior Austro-Imperial forces who re-occupied Schmalkalden, Saltzungen, Vacha and the Principality of Hersfeld. Another body of Austro-Imperials under Field-Marshal Johann Baptist Count Serbelloni advanced to the Werra. The Reichsarmee was now deployed with its left wing between the Werra and the Ulster with advanced posts at Vacha and Tann. Its right wing occupied Erfurt, Ilmenau, Frauenwald, Hof, Asch, the neighbourings of Kulmbach and Kronach. The reserve of the Reichsarmee was behind the Main River towards Lichtenfels and Schweinfurt.

On March 22 in the morning, Ferdinand of Brunswick set out from Münster and marched to Hesse.

On March 24, Ferdinand drove back Austro-Imperial troops posted near Kassel, and then marched to Meiningen.

On March 26, Ferdinand encamped at Rotenburg on the Fulda. The same day, Major-General Knobloch, at the head of a Prussian detachment, dislodged an Imperial detachment from Saalfeld.

On March 27, Ferdinand advanced to Hersfeld where his vanguard surprised about 100 enemies while the Austro-Imperial troops retreated everywhere. Ferdinand then marched to Fulda thus cutting off communications between the French and Austro-Imperial armies.

On March 28, a Prussian detachment under the command of General Lindstädt forced an Imperial detachment from Hof.

On March 31, near Mellrichstadt, the Hereditary Prince with 2 sqns of Ruesch Hussars defeated and dispersed the Hohenzollern Cuirassiers, capturing 55 of them. The hussars then turned their attention towards an isolated battalion of Blau Würzburg Infantry, capturing 130 of them and cutting the rest to pieces.

On April 1, the Hereditary Prince marched to Meiningen with 2 grenadier battalions and some light troops, and captured the garrison (2 bns: Kurköln Leibregiment and Elverfeldt Infantry) and a considerable magazine. He then proceeded to Wasungen where he captured Nagel Infantry. Arberg, who marched to the relief of Wasungen with 1 bn and some grenadiers, arrived too late to save the place and was forced to retire precipitously. Colonel Stockhausen with 40 Hessian hussars and some Hanoverian Jägers lead by Lieutenant-Colonel von Schlotheim, attacked Prinz Savoyen Dragoons and Bretlach Cuirassiers posted near Tann. At the moment of the attack, Prinz Savoyen Dragoons were attending mass. Several dragoons were killed and the Allies captures 4 flags, including 2 standards of Prinz Savoyen Dragoons. In the meantime, Bretlach Cuirassiers rallied and attacked the Allies, driving them back.

The Austro-Imperial army retreated towards Bamberg, closely followed by the Allies beyond Suhl and Schleusingen.

On April 2, Arberg's Corps marched to Schmalkalden and effected a junction with FML Schallenberg's cavalry (Prinz Savoyen Dragoons, Bretlach Cuirassiers and Szechényi Hussars) at Schwallungen. Count Arberg then proceeded to Eisfeld and Coburg while Count Schallenberg with his cavalry took post at Königshofen an der Saale. They then remained in these positions until end of April.

During this incursion, the Hereditary Prince had made more than 2,000 prisoners.

Incursion in Poland against Russian magazines

On the Eastern theatre, from February 24 to March 4, the Prussians made an incursion across the Polish border.

On February 24, Wobersnow crossed the Oder and entered into Poland where he camped near Polnisch Lissa (present-day Leszno) and Reisen (present-day Rydzyna), about 50 km north-east of Glogau. His mission was to overturn the Russian provision operations there. In particular, he had to look for prince Aleksander Józef Sułkowski who was gathering food in expectation of the Russian advent. In fact, Sułkowski had formally declared war to Prussia.

The same day, Wobersnow surrounded the town of Polnisch Lissa and captured Sułkowski's considerable stock of Russian supplies, his little force of about 100 Poles (Sułkowski's personal guard), 15 small guns (from 1-pdrs to 3-pdrs) and Sułkowski himself. The Polish troops were compelled to take Prussian service (scattered among garrison regiments). Furthermore, Wobersnow issued a decree to recruit volunteers for the Prussian army. In fact, village peoples were forcefully incorporated into his corps. Sułkowski's wife was asked for a ransom of 30,000 thalers. Wobersnow then marched on Posen (present-day Poznań).

On February 28, Wobersnow arrived at Posen, coming from Kosten (present-day Kościan) and Stenschewo (present-day Steszew). He destroyed the Russian magazine there and ransomed Jews who were required to pay 2,000 ducats. Wobersnow took 14 hostages till they paid the remaining 676 ducats.

On March 4, Wobersnow left Posen and marched back home. On his way, he was harassed by Russian light troops under the command of colonel Dalke. During this incursion, Wobersnow's forces had destroyed provisions which would have supplied 50,000 men for 3 months.

Incursion in Bohemia against Austrian magazines 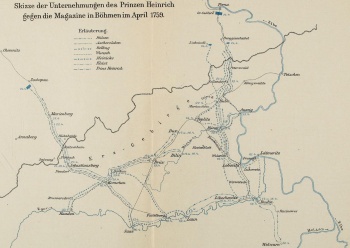 Map of the manoeuvres during the Prussian incursion in Bohemia in April 1759.

In the night of March 25-26, an Austrian force of 8,000 men led by General Beck stealthily marched from Bohemia by two or more roads and completely encircled Grenadier Battalion 21/27 Diringshofen (some 1,000 under major Diringshofen) at Greiffenburg (unidentified location). The Prussian battalion had to surrender.

All this area of Bohemia was guarded by Gemmingen but his forces were too spread out.

On April 15, Prince Henri's column entered into Bohemia at Peterswalde (present-day Petrovice) while Hülsen marched to Passberg (unidentified location). About 600 Grenzers and some Hungarian foot guarded a redoubt on an eminence beyond Peterswalde. Prince Henri's vanguard divided into two bodies, one proceeded to Aussig (present-day Ústí nad Labem), the other to Töpplitz (present-day Teplice); forcing the defenders to abandon their position. The magazine of Aussig was destroyed and about 200 boats on the Elbe burnt. Meanwhile, Hülsen found the pass of Passberg strongly guarded by General Reinhard (I./Andlau Infantry, 1 battalion of Königsegg Infantry, about 1,000 grenzers and hussars for a total of about 2,800 men). Hülsen led is cavalry around the Austrian positions and attacked them on the rear while his infantry launched a frontal attack. He drove the Austrians from their entrenchments, capturing the general, 51 officers and 2,000 men along with 3 colours, 2 standards and 3 guns. The remnants of Reinhard's force retired to Trautenau (present-day Trutnov) where they joined Loudon.

During these operations, field marshal Leopold count Daun was at Jermer (present-day Jaroměř). This raid considerably delayed his operations that summer.

On April 20, Prince Henri, having reached his objectives, ordered to retire with some 3,000 prisoners.

On April 23, Prince Henri's force was back to Saxony.

Incursion in Moravia against Austrian magazines

From April 16 to 20, Fouquet left Leobschutz (present-day Głubczyce) in Neisse (present-day Nysa) country and broke through into Moravia pushing the Austrians before him. However, he found the magazines empty or inaccessible. Thus, he returned to Leobschutz without result.

The Austrian general Deville hastily rushed through the Jagerndorf Hills (present-day Krnov) and pushed on Fouquet's position. Frederick II, who was in Landeshut (present-day Kamienna Góra), hastened over to Leobschutz with reinforcement.

On May 1, Deville swiftly retreated. Frederick managed only to cannonade him in the passes of Zuckmantel (present-day Zlaté Hory) and to cut off his rear-guard of grenzer light troops.

Other sources for the incursion in Poland