Since July 25, 1759, the Fortress of Münster was occupied by the French. However, the Brunswicker General Philipp Ernst Baron von Imhoff (1702-1768) had established a blockade around the fortress with his corps.

On September 6, when Imhoff was informed that a French corps, led by Lieutenant-General Marquis d'Armentières was approaching Münster, he raised the blockade and withdrew to Telgte. The French reinforced the garrison with the Swiss Lochmann Infanterie and Reding Infanterie and supplied the place with a huge amount of ammunition and provisions.

On September 11, d'Armentières left and returned to Wesel, leaving a garrison of 3,000 men in Münster.

Duke Ferdinand of Brunswick sent the young Prussian Major von Bülow to Imhoff as an advisor and endowed him with the highest power. His arrival increased the morale of Hanoverian and Hessian troops. Once again, jäger detachments roamed the countryside up to the gates of Münster. The French now tried to strengthen the fortifications and built new redoubts in front of the gates of Sainte-Égide, Ludger and Saint-Servais.

General Imhoff's Corps renewed the blockade. One part camped on the road to Kinderhaus on the Nubbenberg, the second on the Galgenheide and a third group in the old camp on the Mauritzheide.

During the following days, small detachments of both parties skirmished around Münster.

On October 1, d’Armentières escorted, unmolested, a supply convoy to Münster. When Imhoff finally heard of the arrival of d'Armentières's entire corps in the immediate vicinity of Münster, he precipitously assembled his own corps near Lütkenbeck, to the south-east of the city.

On October 2, d’Armentières managed to resupply Münster and then returned with his convoy by way of Roxel and Nottuln to Wesel without being attacked. 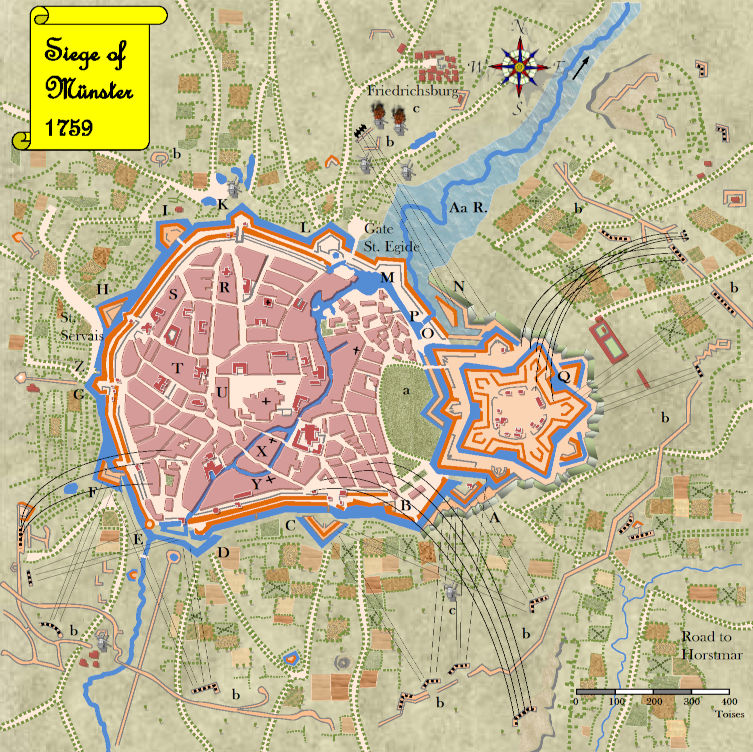 Map of the siege of Münster in October and November 1759
Copyright: Dinos Antoniadis
Key to the map:

On October 3, with d'Armentières's Corps retreating towards Wesel, General von Imhoff decided to encircle Münster once more, including, this time, the western side of the city. Imhoff intended to force the fortress to surrender through hunger.

On October 4, Imhoff divided the siege corps in 5 brigades:

On October 5, Major-General Gayon, the French commander at Münster, sent Colonel Boisclaireau of Durfort Infanterie to made a sortie at the head of 800 men and 3 regimental guns. They attacked the camp of the 4th Brigade on the road to Roxel. The brigade was nearly annihilated, losing 70 men and 100 horses killed or wounded .

On the night of October 10 to 11, Major von Bülow (Ferdinand’s adjutant) was detached by Imhoff with 2 bns and 2 sqns, all his light troops and 3 artillery pieces by way of Dülmen, to prevent the relief of Münster by d'Armentières.

On October 11, Imhoff received a reinforcement of 4 bns (Hanoverian Scheither, Bock, La Chevallerie, and Hessian Canitz) and 6 sqns (Hanoverian Leibregiment, Hammerstein, Reden), which had been sent by Ferdinand from Hameln. Imhoff took position between Nottuln and Appelhülsen with these reinforcements, leaving command of the forces blockading Münster to General von Post. Imhoff also detached Bülow (light troops supported by some infantry) from Dülmen towards Dorsten.

In the night of October 15 to 16, a detachment of the French garrison of Münster under Colonel de Boisclaireau with 725 selected men in 3 columns to surprise the camp of the 2nd Brigade (von Rhöden), posted near Dyckburg, to the north-east of the city. The left column consisted of 300 Swiss led by Lieutenant-Colonel Escher; and the middle column, of 125 men of the Thianges Dragons, Volontaires Étrangers de Clermont Prince and grenadiers led by Captain Cavanac. These two columns should attack the Allied cavalry. The right column was led by Colonel Boisclaireau himself. A spy, a former inhabitant of Münster, provided useful services to the French. The picquets were killed silently with bayonets.

On October 16 around 5:30 a.m., all three columns attacked the camp at the same time. The attack surprised the Allies, most of the soldiers were still asleep and were killed. Marschalk Infantry lost 1 colour, 1 gun and more than 300 muskets. The attackers burnt all its tents. Only the men of Rhöden Infantry managed to escape. In this action, the Allies lost 2 officers and approx. 100 men killed or wounded. The French took 3 officers and approx. 100 men prisoners, and captured 50 horses, four colours and one regimental gun.

The combat had lasted only 20 minutes, and Boisclaireau returned to Münster with his booty. When Duke Ferdinand learned of the disaster, he was very angry and had the commanders of the brigades court-martialed.

By October 26, the siege of Münster had gone ill for the Allies and been transformed into a blockade. Ferdinand sent a reinforcement of 4 bns (Hanoverian Block, Laffert, Estorff, Hessian Erbprinz) and 4 sqns (Breitenbach Dragoons) under Lieutenant-General von Gilsa from his camp at Krofdorf to Imhoff at Münster.

On November 2, Gilsa’s detachment (4 bns, 4 sqns) arrived at Imhoff’s camp at Appelhülsen. The siege artillery was finally sent from Hameln and Lippstadt to Münster.

Around November 5, the General-Feldzeugmeister Wilhelm Friedrich Ernst zu Schaumburg-Lippe, who had been charged by Ferdinand to replace General Imhoff and to supervise the siege of Münster, arrived at Telgte.

With the arrival of the siege artillery, Schaumburg-Lippe could now count on 33 British howitzers and 100 guns. The Hanoverian Artillery Brigade consisted of 49 officers, 50 Stückjunker (officers cadets), 240 Feuerwerker (bombardiers) and 980 constables.

On November 8, d'Armentières marched once more from Bochum to Dorsten, a better position to launch an eventual relief operation of Münster.

In the night of November 8 to 9, the Count of Schaumburg-Lippe opened the trench, south of Münster. However, the real attack was planned on the northern side of the city.

While digging the trenches, the workers and the guarding infantry were very often attacked by Colonel Boisclaireau‘s cavalry.

In the night of November 10 to 11, the trench was opened on the north side of Münster, between the Jesuits House and the Sainte-Égide Gate.

On November 11, the garrison of Münster made an unsuccessful sally, losing 100 men. After this unsuccessful sortie, the Allies established seven gun batteries and two mortar batteries (12 and 8 pieces respectively) near Poggenburg, 750 m from the citadel and in the Jüdefelder Esch.

On November 12, the Allies launched an unsuccessful assault against the Sainte-Égide Gate.

On November 14, d'Armentières finally departed from Dorsten to relieve Münster.

On November 15, the Allied batteries before Münster were completed.

On November 16, Schaumburg-Lippe's batteries opened on Münster and its citadel. The Allies launched two attacks on Münster against the redoubts in front of the Sainte-Égide Gate and the Saint-Maurice Gate, seizing three bastions.

On November 17, d'Armentières encamped at Seppenrade, sending his grenadiers towards Lüdinghausen. Imhoff, charged to cover the siege of Munster, retired from his advanced posts at Appelhülsen to Schapdetten.

On the same day (November 17), Schaumburg-Lippe directed the 57 guns deployed on the north side of Munster to start shelling the citadel.

On November 18, d'Armentières advanced on Senden, just 18 km south of Münster. Imhoff's advanced posts retired from Schapdetten to Roxel. Schaumburg-Lippe's artillery opened against the defensive works and the citadel of Münster. General de Gayon was summoned to surrender the fortress. However, he had learned of the march of d'Armentières' Corps and rejected the summon.

On November 19, Imhoff marched by his left to block the road leading from Münster to Dülmen. He was reinforced with part of the siege corps. Around noon, an engagement between light troops took place near Hiltrup. D’Armentières took position near Albachten. Meanwhile, Schaumburg-Lippe's artillery intensified its fire with the mortar batteries joining the bombardment. A bomb set fire to the arsenal of the Citadel of Münster. The powder magazine was blown up and the barracks and many houses burned. The frightened inhabitants of Münster fled to the southern part of the city.

During the night of November 19 to 20, part of d'Armentières' Corps under Fischer attacked the village and castle of Albachten, dislodging some Hanoverian jägers. Imhoff then took dispositions to attack d'Armentières the following morning.

The besiegers of Münster were now in an unfavourable situation. But, at this moment, d'Armentières received orders from the Duc de Broglie to send back the reinforcements he had previously received. D'Armentières had not enough troops left to relieve the garrison of Münster. He even abandoned all hope that the garrison of Münster could break through the encirclement and join his corps. He retired from Senden to Seppenrade, on his way to Dorsten. During his withdrawal, his rearguard was attacked several times by the detachment of the Lieutenant-General von Gilsa.

On November 21, M. de Gayon, commanding the garrison of Münster, demanded terms of capitulation. The Count Schaumburg-Lippe, on the basis of the brave defence of the garrison, granted them a withdrawal with military honours. After signature of the capitulation, the Allies occupied the citadel and the Neutor Gate (aka Porte Neuve).

On November 22, the French garrison assembled on the market place and left the city with music and waving flags, marching towards Wesel. The Allies took possession of the city. However, before a new city administration could be established, Prussian hussars, jägers and members of Freikorps looted the patrician houses and their wine cellars.

Duke Ferdinand was informed about the surrender of Münster by the Aide-de-Camp von Riedesel. The latter received a gift of 200 ducats for the good news. Adjutant Major von Bülow received a Douceur of 1,000 Thalers for his outstanding conduct.