For 1760, the Prussian Lieutenant-General Heinrich August de la Motte Fouqué, at the head of approximately 13,000 men, was assigned to the defence of the Silesian frontier. He had his headquarters at Landeshut (present-day Kamienna Góra). On the Austrian side, Feldzeugmeister Ernst Gideon Baron Loudon was stationed on the Moravian border with 32,000 men.

Around mid March, Fouqué assembled his force at Steinau and Oberglogau.

At the end of May, Loudon assembled his army at Rothkosteletz (present day Červený Kostelec). On May 29, Loudon quit Rothkosteletz and broke in upon Silesia, a long way to eastward of Fouqué. Fearing for Schweidnitz (present-day Swidnica) and even Breslau (present-day Wroclaw), Fouqué hastened down into the plain to manoeuvre upon Loudon. The Austrian seized this opportunity to capture Landeshut. On June 11, Frederick II sent order to Fouqué to recapture Landeshut which was done by June 17. However, he was now occupying a large area with insufficient troops. Loudon manoeuvred to encircle his positions. By June 23, he was ready to launch an attack on the Prussian positions. 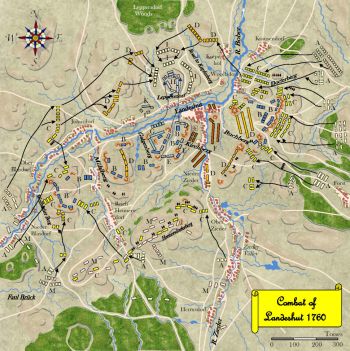 Immediately to the south of the town of Landeshut, there were other fortified positions: on the Kirchberg, Galgenberg, Hahnberg and Blasdorferberg.

On Monday June 23 at 1:45 a.m., the signal of the Austrian attack was given. The artillery opened immediately.

Loudon, with 31,000 horse and foot, advanced in 4 columns on Fouqué's positions. The first column (A on the map), under Loudon's direct command, marched on Vogelsdorf to turn the Prussian left wing. The second column (C on the map), under Müffling, was charged to conquer the Mummelberg. These 2 columns were supported by General Campitelli (B on the map) with 14 bns. The third column, under Gaisruck (D on the map), attacked the Buchberg. Finally, the fourth column (E on the map) under Jahnus and Wolfersdorf, planned to attack the Prussian right towards Blasdorf. Thus the Austrians were attacking the Prussian southward front, both flanks and the rear. Fouqué, by detaching and otherwise, had only 10,680 men.

The two first Austrian columns had before them only 3 Prussian bns holding an overextended front. Loudon Infantry slipped between two heights and drove back a Prussian battalion defending the left of the Mummelberg entrenchment. It then threw itself against the rear of the II./Fouqué Fusiliers while several Austrian grenadier bns attacked it frontally. The second Austrian column met only Mosel Infantry on its way and easily turned and overwhelmed it.

Everything then started to fall apart for the Prussians. The 2 Prussian bns defending the Buchberg were attacked by Gaisruck. When they saw that they were also threatened on their left, they abandoned their position. The entire Prussian left wing was in full retreat when Fouqué sent it a feeble reinforcement of 1 grenadier battalion. Despite the courage of its commanding officers, who were killed or wounded, it was impossible that such a small reinforcement could restore the situation. The grenadier battalion retired with losses while the rest of the Prussian left wing retired on the Kirchberg. Nevertheless, Fouqué threw 1,500 horse to cut their way through the Austrian attackers and pass the Bober, hoping to secure a line of retreat.

While these things were happening on the Prussian left wing, the 4 Prussian bns of the right wing, under the command of General Schenkendorf, were also under attack by the fourth Austrian column (16 bns and 30 sqns). Despite a long and fierce defence, the Austrians seized the heights of Blasdorf and Reichennersdorf.

Schenkendorf's battalions rallied under the protection of the Galgenberg. Fouqué then ordered these battalions to recapture their lost positions. Schenkendorf successfully assaulted his former positions, capturing 3 colours and driving back the Austrian on Hennersdorf. Action then ceased in these quarters.

The Austrian then brought 1 infantry brigade and all the cavalry of their left beyond the Bober to seize the road to Schmiedberg and thus cut Fouqué's last retreat. Fouqué, who did not want to abandon his post, just sent 3 hussar sqns to observe this movement.

Until then, the Austrian had seized only secondary posts and the Prussian main corps was still holding the heights of the Galgenberg and Kirchberg where all routed battalion had rallied. Loudon took his dispositions to capture these heights. His right wing cavalry being useless against such steep positions was transferred to the left bank of the Bober to intercept any retiring Prussian unit. He planted a battery of 12-pdrs on the Ziegleberg opposite to the Kirchberg. He also divided his infantry into 2 columns. The first column advanced against Landeshut to turn the left of the Prussian positions while the second column marched through the village of Zieder and attacked the Kirchberg frontally.

The second column clashed prematurely with the Prussians, before the first column had had time to take position, and was forced to retire in disorder on Zieder. However, Loudon, having seized Landeshut, moved through the town and carried the redoubt on the Kirchberg. The other Austrian column immediately charged from Zieder. The Prussian battalions defending the Kirchberg, even though practically surrounded, managed to retire to the Galgenberg.

Fouqué had now only two choices: to await his ruin on the Galgenberg or to cut his way through the Austrian forces. He sent instructions to Schenkendorf to retire behind the Bober. However, the officer carrying his orders was killed. Fouqué then sent his son with the same instructions and started his march at the head of 2 bns. When Fouqué reached Leppersdorf, he found the Austrian cavalry in possession of all the passages. He then formed square with the wrecks of his infantry and cut his way with bayonet and bullet, managing to cross the Bober.

The combat was fierce till a bullet killed Fouqué's horse and carried the general himself to the ground. The Jung-Löwenstein Chevauxlegers, who had charged and again, cut furiously upon Fouqué and wounded him thrice. This action gave the Austrian enough time to bring a grenadier battalion in support of the cavalry.

After a fierce resistance, Fouqué finally gave his sword to the colonel of the Jung-Löwenstein Chevauxlegers. Many of the wrecks of Fouqué's infantry were massacred, no quarter given. The Prussian cavalry, with the loss of about 500 men, cut its way through. Altogether, only 1,500 Prussians managed to escape.

The gate of Silesia was now open and Loudon could consider taking Glatz.

Brigade under Major-General Count Naselli (to attack the Doktorberg)

Detachment posted on the road from Landeshut to Freiburg

Note: Pálffy Cuirassiers are mentioned in the Albertina as well as in the history of the regiment as being present at this battle. However, we did not yet find an order of battle listing this regiment among the units who participated.