In August 1760, Frederick's army opposed the Austro-Russian invasion of Silesia.

On August 14, a Russian army under the command of count Piotr Semionovitch Saltykov crossed the Oder and encamped at Grossbresa (unidentified location) on the road from Auras to Lissa. The same day, Frederick's camp extended from the village of Schimmelwitz (unidentified location), fronting the Katzbach for about 3 km, north-eastward, to his headquarters in Liegnitz (actual Legnica) suburb. He was surrounded by Austrian corps. Field-marshal count Daun was on his right and rearward, now within 4 to 8 km. Field-marshal baron Loudon was to his left and frontward, 7 or 8 km away, the Katzbach separating Frederick and him. Field-marshal count Lacy lay from Goldberg (actual Złotoryja) north-eastward, to within 7 or 8 km rearward. Three Austrian armies totalling 90,000 men (not counting Tchernichev and his 24,000 Russians) watched a Prussian army of 30,000 men. Frederick decided to reach Glogau (actual Głogów). He rode with his generals through Liegnitz, across the Schwartzwasser, to the Pfaffendorf heights where he explained them his plan. They then returned to camp. At the end of the afternoon, an Austrian deserter warned the Prussians that an attack was planned for that night. From about 8:00 PM, Frederick's army got on march in several columns while peasants, hussars and drummers were left behind to keep the Prussian camp alive. About the same time, Loudon was also leaving his camp at Jeschkendorf (actual Jaśkowice Legnickie) with orders to seize the heights of Pfaffendorf. He expected to intercept the Prussian baggage. It was about 11:00 PM when Daun's grenzer light troop discovered that Frederick's camp was now empty. The Austrians did not know where Frederick had repositioned his army. In fact, Frederick was on the march to Glogau to resupply his army.

On August 15, at about 1:00 A.M., the whole Prussian army was safely across the Schwartzwasser. Meanwhile, Lacy marched all night towards Waldau to attack the Prussian left wing, only to discover the camp empty.

At 2:30 A.M., the king was taking a nap by a bivouac fire in front of the Grenadier Battalion 1/23 Rathenow, when major Hund of a Hussar rgt came at full gallop, asking where the king was. Once he was brought in presence of Frederick, major Hund informed him that an important Austrian force was advancing from Bienowitz and Pohlschildern against the Prussian left wing. They were within 400 paces from his bivouac and had already driven back his outposts. In fact, it was Loudon with 35,000 horse and foot of the Reserve.

Indeed, Loudon had marched at sunset and passed the Katzbach in 3 columns near Pohlschildern, intending to attack the Prussian train and baggage at Topferberg. For this reason, Loudon had no vanguard. He was marching at the head of his corps when it stumbled upon the Prussian detachment of major Hund. 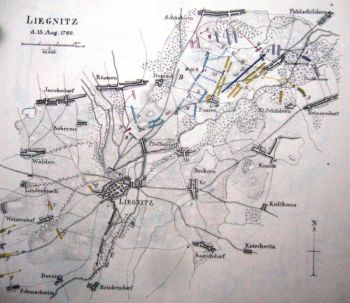 From Waldau where it attained its maximum, the Schwartzwasser River formed an irregular horse-shoe with high ground to its northern side and Liegnitz and hollows to its southern. It then joined the Katzbach River flowing north towards the Oder.

Frederick had planted himself in order of battle on the northern horse-shoe shaped heights. The Prussian soldiers all slept under arm. Zieten commanded the right wing in the Schwartzwasser part of the line, Frederick led the left wing in the Katzbach part.

On August 15 soon after 2:30 AM, Frederick, then informed of the presence of an Austrian corps nearby, immediately ordered major Hund to delay its advance by all means. He also ordered general Schenkendorf, whose brigade was at the extreme left of his line, to form on the Wolfsberg near Bienowitz. He also extended his second line to the left to prevent any outflanking movement. Finally, Frederick moved a few cavalry rgts forward to further delay the Austrians.

According to Frederick's orders, Schenkendorf took possession of the Wolfsberg on the left flank where he planted a battery of ten 12-pdr guns. Schenkendorf astonished the Austrians with volleys of case-shot from the Wolfsberg. This salvo wreaked havoc in the Austrian ranks and prevented the attackers to form. This left time for the left wing to prepare itself to receive the Austrian assault.

Loudon had not the least expectation of Frederick's army and was speeding all he could with no vanguard to avoid alarming the Prussian baggage escort. Therefore, Loudon's surprise was probably intense when Prussian musketry and case-shot opened on him. 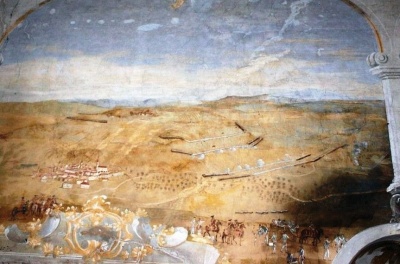 Detail of a fresco depicting the battle of Liegnitz.

Source: Fresco of the Castle of Brezovica in Croatia, painted in 1775 at the request of FZM Josip Kazimír Count Drašković von Trakošćan

Credit: Mr. Mravlinčić and Mrs. Srdenoselec of the Castle of Trakošćan for their kind authorisation to reproduce details of this fresco

Loudon's behavior, on being hurled back with his Reserve, was magnificent. Rapidly evaluating the situation and judging that retreat would be impossible without ruin, he hastened instantly to form himself even though the ground was highly unfavorable. He had room only for a frontage of 5 bns (5,000 men). He planted several batteries and then launched an attack against the heights. The Prussian Grenadier Battalion 1/23 Rathenow and Grenadier Battalion 33/42 Nimschöfsky, along with Alt-Braunschweig Infantry, repulsed this initial assault and drove back Loudon's reserve upon the Austrian columns advancing to join it.

These columns were not expecting a Prussian attack. The column which was supposed to move through Panten halted in the village and occupied it without trying to advance farther. This allowed the Prussian infantry enough time to form. Anhalt-Bernburg Infantry and Prinz Ferdinand Infantry took position to the left of the Prussian units who had sustained the first Austrian attack. The Prussian reserve also came to the rescue of these isolated units and took position on the left of the line while Grenadier Battalion 29/31 Falkenhayn filled the gap between Anhalt-Bernburg Infantry and the first units engaged. The Prussian cavalry formed behind the first line of infantry to the exception of a dragoon rgt sent to cover the left flank. Finally, Wied Fusiliers and Gabelentz Fusiliers formed a reserve behind the centre of the Prussian lines.

The rest of the Prussian army deployed on the heights along the Schwarzwasser from Humeln to Bienowitz. Thus facing en potence towards Liegnitz and Daun's positions and towards Panten and Polschildern and Loudon's positions.

Meanwhile, Loudon had managed to reform a few battalions of his central columns and had renewed his attacks of the heights. However, it was impossible to deploy on a front of more than 5 bns in such a position and he was repeatedly driven back. Loudon's right wing cavalry was initially more successful. It drove back Krockow Dragoons on Schönborn. Nevertheless, Markgraf Friedrich Cuirassiers charged the left flank of the attacking Austrian cavalry and threw it back into marshes near the village of Schönborn.

Loudon rallied his battalions, brought new battalions to support them and, extending his right, tried to outflank the Prussians on their left. The latter extended their own lines and threw disorder in the Austrian infantry.

Seizing this occasion, the Prussian cavalry charged the Toscana, Starhemberg and Waldeck Infantry, forming the Austrian right wing. The Prussian cavalry decimated these regiments. Meanwhile, Loudon had ordered his cavalry to launch another charge against the left flank of the Prussian infantry. The leftmost battalions suffered lightly from this charge but Anhalt-Bernburg Infantry advanced on the Austrian cavalry and delivered a deadly fire before charging it at the point of the bayonet and driving it back. The Austrian squadrons scattered themselves on the right of their infantry who routed towards Bienowitz to recross the Katzbach.

While the events were taking place on the Prussian left wing, the right wing, under the command of Zieten and Wedel was facing undisturbed towards Liegnitz. It established strong batteries enfilading the two roads coming from the town, expecting an attack from Daun in this area.

Frederick, by following Loudon's movement, had created a considerable gap in his line. Zieten's line and Frederick's line were now fairly fallen asunder. The Austrians were too slow to take advantage of the situation. The Prussians soon filled this gap with 7 bns (Wedell Infantry, Forcade Infantry, Saldern Grenadiers and Garde) previously forming the left of the right wing.

An Austrian column was just entering Panten when the fight began. This column had remained inactive in Panten while Loudon struggled against Frederick. Colonel Möllendorf, realising that this Austrian columns was preparing to burst out of the village of Panten, rushed up with one Garde battalion and cavalry, set Panten on fire and forced the Austrian column to retire, capturing a large number of artillery pieces.

After five successive Prussian attacks, Loudon finally resolved to leave the battlefield. He established a small battery at Bienowitz to protect his retreat from the Prussian cavalry.

By 5:00 A.M., the engagement against Loudon was quite over.

Frederick did not dare to pursue Loudon because he wanted to spare the units of his left wing to eventually support his right where he expected a combined assault from Daun's and Lacy's corps.

In the evening of August 14, Daun had left his camp in 6 columns, marching towards the Katzbach. At 11:00 PM, Ried's light troops had passed the river to dislodge the Prussians from the village of Schimelwitz which they found abandoned. This crucial information was slow to reach Daun who was informed only at 2:00 AM on August 15. He immediately gave orders to his army to cross the Katzbach. However, due to darkness and to the delays occasioned by the construction of bridges, Daun's army passed the Katzbach only at 5:00 AM, too late to support Loudon.

At 5:00 AM, Daun's vanguard appeared behind Liegnitz. Daun saw the Prussian right wing drawn on the heights behind Pfaffendorf. However, to reach it, Daun's force would first have to pass the Schwarzwasser and to move through Liegnitz. Daun threw Ried's light troops into the town and its suburbs and sent about 30 sqns across the Schwarzwasser over the stone-bridge at the Topferberg. Meanwhile, Daun instructed Lacy to follow the Schwarzwasser upstream and to cross it wherever he could find a convenient place.

The cavalry that Daun had sent across the Schwarzwasser drove in Zieten's picket and were torn to pieces by Zieten's guns. It was impossible for Daun to form in order of battle there, with Zieten's batteries shearing his columns longitudinally as they march up.

For his part, Lacy had been about Waldau, to try farther up the Schwartzwasser on Zieten's right. However, the Schwartzwasser proved amazingly boggy and not accessible on any point to heavy troops. He could not manage to get across, except for two poor Hussar regiments. These hussars attempted an attack on the baggage near Hummeln.

Daun had deployed between Weishof and Dornigt but when an officer informed him of Loudon's defeat, he retired to his initial positions between Neudorf and Cosendau.

The Prussians had engaged only their left wing. For his good conduct on the battlefield, the Anhalt-Bernburg Infantry was allowed to have its side-arms back.