At the end of July 1760, while a Russian army was invading Brandenburg, a cavalry detachment under the command of colonel Schwanenberg established its headquarters at Bullewinkel near Colberg (actual Kołobrzeg) in preparation to form a junction with the Russian infantry transported by the fleet which should land near this fortress in August.

Description of the surroundings of Colberg

The mouth of the Persante river (actual Parsęta river) and its wharf were not far from the northern outskirts of Colberg. The town was located on the right bank of this river.

On the left bank of the Persante, there were some buildings, three surrounding hills, a lake, forests and small streams flowing into the river. The biggest hills stretched from the village of Spinhauser to those of Werder and Sellnow. Farther west, in the direction of Treptow, the village of Bork stood around a small lake in the middle of the forest along a road leading to this big hill. The other hills stretched to the south behind forests separating coastal hills from the villages of Prettmin (actual Przećmin) and Spie, towering over the track leading to Treptow. Prolonging these hills to the east, in a straight line passing to the south of Sellnow and at right angle of Kartofelsberg, the Kauzberg hills blocked the approaches. Narrow strips of forests and patches of bogs extended behind these hills to the south.

On the right bank of the Persante river stood a group of four hills stretching southeastwards. The first and widest hill, called the Binnenfeld, extended from the waterside to the almost to the small Matzweise stream which separated it from a wood to the south, a little bit lower than the fortress. The hill of Wolfenberg dominated a plateau. To the south, almost at right angle with Wolfenberg, there was a row of end moraines. These platforms formed a semicircle linking the Persante river with a pond. The highest points on this bank were Klosterfeld and Hoheberg. A thick forest extended eastwards, making the access to Colberg difficult almost from the waterside all the way to the villages of Tramm and Stoikow to the south.

Further south, an overflow area forbade the access to the Persante river from the west side while bogs and the Matzikerteich lake blocked the eastern approach. However, the Green Hill facilitated the access to this strip of moraine hills. It was a key position and the only way to get access to these end moraines. These two separate groups of hills were linked by a third one. In the front of it was the so-called Bullewinkel. This position guarded the access to the area near Colberg. It was a key position very difficult to avoid, its left slope reached the lake. To the south of the Bullewinkel and Green Hill was a tongue shaped row of hills with many rivers and woods impeding communications. The Persante river was difficult to cross from both banks since it ran in a floodplain and its banks were covered with bogs. Furthermore, the Persante branched out into 3 or 4 smaller rivers as it drew near the fortress of Colberg. These rivers then flowed into a single one at the place known as the Munde. 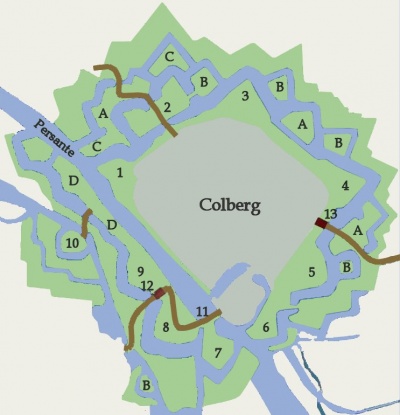 The fortifications of Colberg consisted of entrenchments surrounding the fortress, bastions and the surrounding curtain walls which extended from west to east through the swamps along the Persante river. The shape of the entrenchements was irregular. A strip of entrenchment stretched along the left bank of the Persante supported by bastions Geldern I, Geldern II and Cleve. The entrenchments on the right bank of the Persante were in the shape of a trapezium with bastions in each corners. In the suburb of Ujście, was the “Munde” hornwork. The “Bulow” ravelin ran in front of the fortress while the Lauenburg ravelin ran from the river to Matz Wiese (actual Stramniczanka). In the 4 corners of the city walls, there were bastions: Halberstadt, Preussen, Neumark and Pommern. Overall, 130 guns and 14 mortars of various calibre were planted in the entrenchments and bastions surrounding the fortress.

The outline of these entrenchments looked as illustrated below.

On August 26, a Russians fleet arriving from St. Petersburg appeared in front of Colberg.

On August 27, a Swedish fleet under vice-admiral Langebielke joined the Russian fleet at Colberg. The same day, the bombardment of the town and fortress began.

On August 29, Frederick II gave orders to general Werner, who was at Glogau (actual Głogów) in Silesia as part of general Goltz's force, to come to the relief of Colberg. Werner's force consisted of:

During the night from September 1 to 2, a first Russian infantry force (2,353 men and 5 battalion guns) was landed.

On September 5, Werner left Glogau and marched towards Colberg.

On September 7 and 8, the Russian fleet deployed near Binnenrede to cover an assault on the Hasenschanze works defended by lieutenant von Hallerman with 3 guns and 24 men from I./GRI Puttkamer. The work was captured and Hallerman and his men taken prisoners.

During the night of September 8 to 9, Demidov planted a first battery on the Wolfsberg. The battery was ready by 3:00 AM.

Siege works then began and the first parallel was opened 600 meters from the glacis. Two additional batteries were set up in the Vorlaufer garden.

On September 13, the Russians summoned the garrison of Colberg which refused to surrender. The same day, Werner received reinforcements which brought his force to some 3,800 men. These reinforcements were:

In the night of September 13, a grenade started a big fire in the magazine containing 200 ton of flour.

On September 16, a second parallel was opened near Sankt Nikolaus church. The same day, all Russians guns fired in honour of empress Elizabeth.

On September 17, a large battery was erected and a fifth battery set up within 100 meters from the glacis. The same day, Werner reached Stolzenberg with his relief force. He was now at only 30 km from Colberg.

On September 18, Werner arrived near the Russian entrenchments. He had marched 320 km in 13 days. Upon his arrival, he immediately attacked a small Russian detachment (about 300 men and 1 gun) on the Kauzberg hill near Sellnow (actual Zieleniewo). This Russian detachment defended a small redoubt covering a bridge. Some 200 men from the Wunsch and Courbière freikorps first skirmished with these Russian troops. Then, Werner Hussars advanced and captured 160 men and the unique gun of this redoubt. The rest of the detachment were killed or wounded. The unexpected arrival of Werner's force created panic in the Russian camp. All the infantry was immediately evacuated. Part of it re-embarked while another retired towards Koslin (actual Koszalin). All siege tools, supply, ammunition and several artillery pieces were abandoned on the spot. The Prussians thus captured 15 heavy guns (from 24 to 36-pdrs), 5 howitzers, two mortars and 2 3-pdrs guns.

On September 23, the Russo-Swedish fleet abandoned the blockade of Colberg and sailed away.

During the siege, the losses of the garrison and population of Colberg amounted to 22 killed and 47 wounded. Vice-admiral Langebielke reported that the Russians lost about 500 men and that, during the siege, some 100 Prussian deserters had taken refuge in the Russian camp.