At the end of February 1761, the Allies drove Broglie's Army back to the Rhine during their campaign in Hessen. However, on March 9, Broglie received a reinforcement of 15,000 men led by de Muy and arriving from the Lower Rhine. On March 11, the Duc de Broglie marched with all his army to relieve Kassel, forcing the Allies to gradually retire. On March 16, Stainville cannonaded the positions of the Hereditary Prince of Brunswick at Stangenrod, forcing him to retire to Homberg/Ohm. On March 19, the Hereditary Prince advanced on Stangenrod and Wirberg near Grünberg while Luckner drove the Légion Royale from Laubach back to Hungen. On March 20, the Duc de Broglie sent reinforcements (3 cavalry brigades and the Grenadiers de France) to Stainville to attack the Hereditary Prince and drive him back beyond the Ohm. He also sent Closen to Stangenrod to support Stainville's main attack on Grünberg and prevent any Allied counter-attack from Homberg; Poyanne (Carabiniers and Auvergne Brigade) to Londorf to support Closen; furthermore, Boccard's Swiss brigade was sent to support Poyanne. 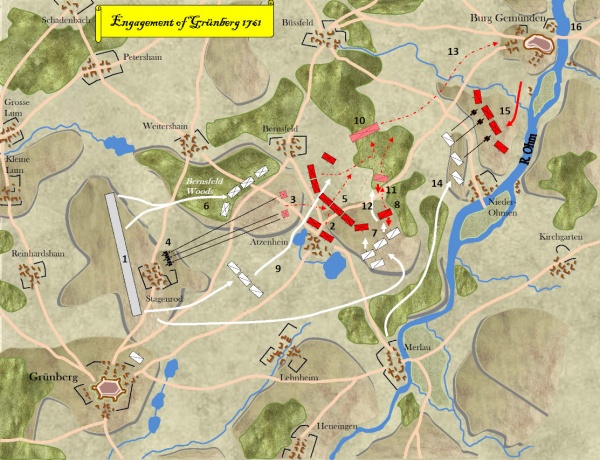 Map of the Engagement of Grünberg
Copyright: Dinos Antoniadis

On March 21, Stainville deployed his corps in 2 columns. Broglie personally joined Stainville on a height near Grünberg. They observed the French columns arriving in very good order. Stainville led personally the column attacking Grünberg while Brigadier Diesbach led the second column against Laubach.

During his attack on Grünberg, Stainville heard a cannon and musket fire on his right. Presuming that it was Luckner's Corps who had been driven out of Laubach by M. de Diesbach, he dispatched the Volontaires de Schomberg supported by the Royal-Allemand Brigade to the heights separating Grünberg from Laubach to cut Luckner's line of retreat.

Stainville then sent the Comte of Scey-Montbeillard with the Du Roy Dragons and La Ferronnaye Dragons to the Heights of Stangenrod on his left before launching his attack on Grünberg.

When the Comte de Scey reached the Heights of Stangenrod, he could see Closen's Corps (Orléans Dragons, Autichamp Dragons, Volontaires d'Austrasie, Volontaires du Hainaut, Volontaires Étrangers de Clermont Prince and Volontaires de Saint-Victor) to his left. Scey also discovered the positions of the Hereditary Prince in the village of Atzenhain which was surrounded by a pond and several ravines. The Allies were not expecting an attack in this area and would have been completely surprised. However, Closen preferred to open with his artillery on the closest Allied units.

The Allies then retired precipitously from the village and formed on the heights behind Atzenhain. Closen detached his light infantry in the woods of Bernsfeld to outflank the Allies on their right and personally led his mounted light troops and dragoons against their left flank. At the head of 2 sqns of Autichamp Dragons, supported by 2 sqns of Orléans Dragons and followed by the mounted light troops (the Volontaires), he overwhelmed their cavalry who gained the cover of the wood. Seeing this, Closen wheeled left and attacked the infantry column, throwing it into disorder and taking several prisoners.

When Du Roy Dragons from Scey's Corps joined the fray, marching to the right of the pond located on the left side of the village, the Allied infantry formed in columns and marched towards the nearby wood. The Allied infantry then broke and was pursued through the thickets.

The Allied cavalry had by now rallied. When Closen reached the plain, he was charged by this Allied cavalry. Closen's squadrons where by this time disordered and were driven back. However, the II./La Ferronaye Dragons counter-charged supported by a salvo from the Volontaires de Saint-Victor. The Allied cavalry was repulsed and the French dragoons and mounted light troops pursued them. However, the last charge of the Allied cavalry gave enough time to the Hereditary Prince to retire on Burg-Gemünden and to repass the Ohm in great confusion.

During this time, the Royal-Allemand Brigade, who was supposed to advance through the woods along the Ohm and to form in the plain, came under fire of Luckner's artillery planted on the the village of Niederohmen. This delay prevented Royal-Allemand from reaching its assigned position to complete the encirclement of the Allies and allowed the Hereditary Prince to escape with most of his corps.

During the action at Grünberg, d'Origny took possession of the village of Wetter, abandoned by the Allies, while Wurmser drove back the Allies from Gross-Seelheim and Klein-Seelheim; and Rochambeau made a diversion to attract Ferdinand's attention.

In this action, the Allies lost 3,000 men (including 2,000 prisoners: 1 bn of the Brunswick Leib-Regiment, 2 bns of Imhoff Infantry and 1 bn of Rhoedern Infantry), 18 colours, 1 standard and 14 guns. The Hanoverian Lieutenant-General von Reden was mortally wounded. The French lost about 100 men killed or wounded, the Baron de Closen being wounded at an elbow by a musket ball. He was replaced at the head of his vanguard by M. de Montchenu.

These orders of battle are very preliminary. We have not yet found a comprehensive source listing all units involved.