After escaping from the encircled fortress of Colberg (actual Kołobrzeg) at the beginning of November 1761, prince Eugen von Württemberg made a junction at Greiffenberg (actual Gryfice) with a corps under lieutenant-general Platen on November 16. At the end of November, the prince of Württemberg resolved to make a last attempt to force the Russians to lift the siege of Colberg.

On December 7, the prince of Württemberg marched towards Treptow (actual Trzebiatów). On December 9, he arrived near the town, finding a small Russian cavalry force (2 dragoon rgts, 2 hussar rgts and some cossacks) occupying it. He placed Grenadier Battalion 13/26 Schwerin, Kalckstein Volunteers and some artillery on a nearby hill. Then, he deployed the rest of his infantry in line. The Russian force evacuated the town where Württemberg established his headquarters, assigning the Werner Hussars and 8 bns as garrison. On December 10 at 10:00 PM, a Prussian convoy of 1,000 wagons with supplies, medicines, provisions and ammunition arrived at Treptow, under escort of major's Rohr's detachment. On December 11, Württemberg marched from Treptow in 2 columns, escorting the convoy. It was cold and snowing. 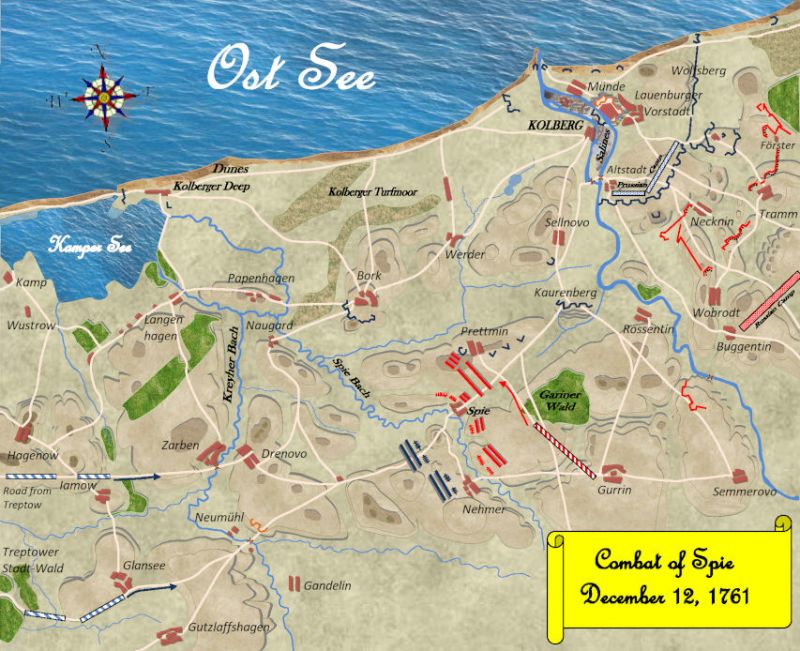 Map of the Combat of Spie, fought on December 12, 1761
Copyright: Dinos Antoniadis

When the first column tried to cross the Kreyerbach near Neumuhl (actual Głąb), it was stopped by the Russian corps of Berg (most probably 1,000 grenadiers, 4,000 cavalry and 6 guns) entrenched in the field fortifications previously built at this location by the Prussians in October. Instead of storming the Berg's positions, prince Eugen decided to wait for his second column to turn them. Indeed, prince Eugen realised that a direct assault on these entrenched positions would be too costly and could jeopardize his plans for the relief of Colberg. When the second Prussian column appeared at Drenow, Berg abandoned his positions and retired to Nehmer (actual Niemierze) and Spie (actual Błotnica) behind the Spiebach (actual Błotnica river). Berg also sent couriers to Rumyantsev to request assistance. Prince Eugen left Grenadier Battalion 17/22 Rothenburg and Kalckstein Volunteers at Neumuhl to protect his line of retreat.

For the incoming combat, prince Eugen had 30 battalions (about 12,014 soldiers and 329 officers) and between 2,500 and 2,800 mounted troops. However, personal conditions of many of these units were terrible. For example, II./Ramin counted only 80 men and was integrated into I./Ramin for the combat. Similarly, Finckenstein Dragoons could field less than 200 horses, mostly in bad physical conditions and some simply useless in combat.

The Prussians advanced on Spie, where they intended to cross the Spiebach, and took strategic positions on the hills of Pretmin (actual Przećmino) hills. Indeed, old fortifications built on these hills constituted a good protection and an interesting base to make an attempt at delivering the supply convoy to Sellnow (actual Zieleniewo) and from there to Colberg. Prince Eugen expected that the main Russian army under the command of Rumyantsev was still encamped near Garin (actual Charzyno), where he could see campfires. He did not expect another Russian corps in his immediate surroundings. The next few hours showed how much he was wrong.

Meanwhile, Berg deployed his corps in 2 lines behind the Spiebach. His right wing extended up to Spie and his left to Nehmer. The crossing of the Spiebach was protected by 1 grenadier battalion deployed in an old Prussians redoubt on the Green Hill. Furthermore, to oppose the Prussian advance, Rumyantsev sent major-general Jakolevs with 10 bns, 10 sqns of line cavalry and 1 cossacks pulk. In addition, he deployed 5 grenadier bns in reserve near Sellnow. Finally, the corps of Dolgorukov and Olitz were hidden in 2 lines in the woods near Garin. These 2 corps moved immediately towards Spie and Pretmin when the combat started. Indeed, Rumyantsev had managed to concentrate some 20,000 men in the sector.

The combat opened with a duel of artillery which lasted 2 hours. Snow then started falling. After that, general Schenckendorff received order to send Bock, Busche, Kleist and Beneckendorf (between 1,000 and 1,200 grenadiers) to assault on the Green Hill redoubt which was defended by 400 to 670 Russian grenadiers and 4 unicorns under the command of captain Stackelberg. The Prussian assault was supported by a second line formed of IR25 Ramin, IR16 Dohna, DR12 Württemberg Dragoons and DR10 Finckenstein Dragoons. Furthermore, Grenadier Battalion 13/26 Schwerin and 1 battery were deployed opposite to Green Hill, on the left side of the road to Spie, to cover and protect the line of retreat of the grenadiers if they could not capture the redoubt.

The first assault of the Prussian grenadiers failed. Heavy canister fire and musketry from the Russian grenadiers forced the Prussian grenadiers to retreat. The second assault was conducted simultaneously by both sides by the 2 Prussian lines. The redoubt was soon surrounded and soldiers engaged in hand-to-hand fighting at the point of the bayonet. The Prussian assault was led by IR25 Ramin, under the command of colonel von Mühlbe and lieutnant-colonel Kalckreuth while , and IR16 Dohna attacked from the left flank. The routed Russian grenadiers, running away from the redoubt, were captured by the Werner Hussars and Plettenberg Dragoons. Captain Stackelberg, 2 officers, and 270 NCOs and privates were captured. The rest of the Russian grenadiers were dead or heavily wounded. Russians sources mentions that, in combat of Spie, Stackelberg's battalion lost 3 officers and 396 men, killed, wounded and missing.

The snowfall soon stopped and from the hills over the village of Pretmin, the Prussians saw a large green snake slowly advancing towards their positions. It was a Russian corps with a strong artillery. Rumyantsev had immediately sent reinforcements when he heard of the Prussian attack on Green Hill. However, by the time reinforcements arrived the redoubt had already been taken. The Russian infantry took positions in 3 lines and deployed his numerous artillery close to the village of Spie. Their heavy fire forced the Prussian infantry to evacuate the redoubt of Green Hill. The unexpected appearance of nearly 20,000 Russians clearly jeopardized prince Eugen's plan to make a breakthrough towards Colberg. Desperate, he gave orders for the retreat.

During this time, Grenadier Battalion 29/31 Falkenhayn (200 men) under the command of captain Krahn, posted near Drenow with 2 guns, had been attacked by cossacks coming from Bork and Naugard. The Prussian grenadiers drove back all charges inflicting heavy losses to the cossacks. During the engagement, colonel von Lossau came to their rescue with the Malachowski Hussars, Ruesch Hussars and Prinz Ferdinand Infantry who had been escorting prisoners from Green Hill. When they saw, these reinforcements arriving, the cossacks fled from the battlefield.

When the Prussians retreated, general Berg pursued them at the head of 4,000 cavalrymen.

During this combat, the Prussians lost 2 officers, 6 NCOs and 50 men killed; and 17 officers and 542 men wounded. Most of them died from cold weather or exhaustion. Continuing the combat was pointless since there was no way to relieve Colberg.

The Prussians were advancing in 2 columns.

Escorting the convoy and forming the rearguard:

no detailed order of battle available yet