Since mid-September 1761, during the campaign in Western Germany, a French army under the Prince de Soubise had crossed the Lippe and was threatening Münster.

On September 30, 1761, Soubise decided to send the Prince de Condé against Meppen in an attempt to capture the town, hoping to draw Ferdinand's attention so that he would retire from Hesse. Condé, marching along the right bank of the Ems, appeared in front of Meppen with a strong detachment while his artillery, escorted by 1 grenadier battalion, arrived following the left bank.

Meppen is located at the confluence of the Ems, Hase, and Nordradde rivers. Its name stems from the word Mappe, meaning "delta".

As early as 1360, Meppen had been granted the right to build fortifications by Prince Bishop of Münster. These fortifications were improved over three centuries, and by 1761 Meppen was one of the most heavily fortified towns of the Prince-Bishopric of Münster. 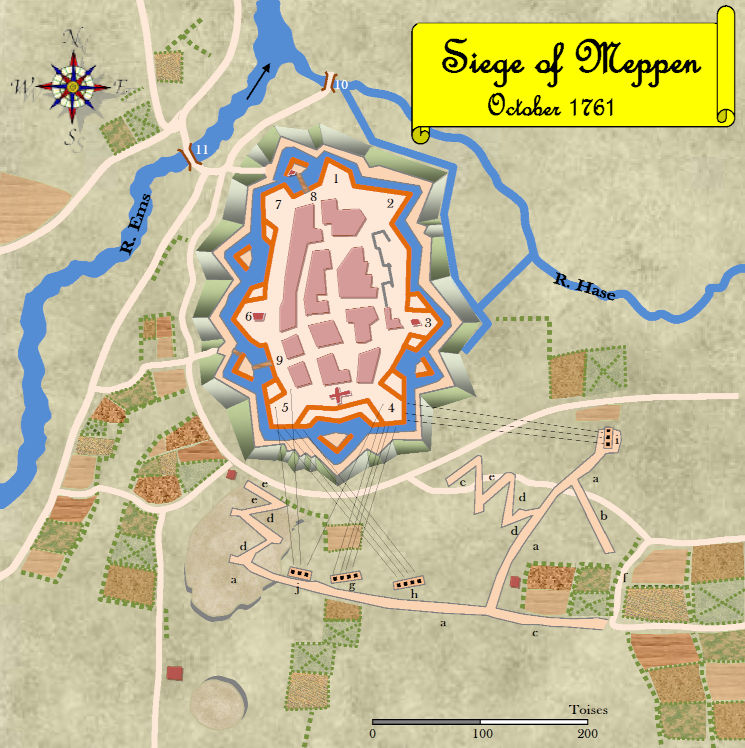 Map of the siege of Meppen in September and October 1761
Copyright: Dinos Antoniadis
Key to the map:

The Allied garrison of Meppen consisted of only 500 men.

The French siege corps of the Prince de Condé consisted of:

In the evening of September 30, Condé opened the trenches, starting with the first parallel and the communication of the right (a and b on the map respectively).

On the night of October 1 to 2, the French made the communication of the left (c on the map) also the débouchés on the heads of the two bastions of the front of the attack (d on the map).

On the night of October 2 to 3, the French made the communications of the same débouchés (e on the map).

The French also erected three gun batteries (g, h, i on the map) and a howitzer battery to shell the city (j on the map).

On October 4, the Allied garrison (500 men) of the town of Meppen capitulated to the Prince de Condé and were taken prisoners of war. Condé then returned to the army, leaving a small garrison to remove the artillery captured in the town and then to raze the fortifications.

By October 12, the French had completed the destruction of the fortifications of Meppen.

After the heavy destruction suffered during the Seven Years' War, the Prince-Bishop of Münster ordered the rebuild the fortifications of the city.

Dinos Antoniadis for the research, the map and the initial version of this article