The Swedes' preparations and their summer offensive from July 19 to August 31 are described in our article 1761 - Swedish campaign in Pomerania – Swedish summer offensive.

Meanwhile, the commander-in-chief of the Swedish field army, General Augustin Ehrensvärd negotiated with the Russian General Piotr Rumyantsev, who was occupying Eastern Pomerania (Hinterpommern) on the right bank of the Oder, to determine their future operations against the Prussians. The Russians were ready to contribute 500 cannon, mortars and howitzers to make the siege of the Prussian stronghold of Stettin (present-day Szczecin) on the Baltic coast. For their part, the Swedes should contribute 4,000 to 5,000 men and provide transport for artillery ammunition.

The Swedish field army never had enough men to represent a serious threat to the Prussians. However, the Swedes had created an elite light brigade with the youngest, most competent officers in the Swedish army, who were hand picked by General Ehrensvärd who really wanted to get rid of the Prussian light brigade of Wilhelm von Belling.

The Swedish field army was supposed to receive some 6,331,833 daler silfvermynt (silver coins) in subsidies from France. However, the French could not contribute this sum to support the Swedish forces in Pomerania. The Swedish government estimated that it needed a total of 12,831,833 daler to continue operations. The leader of the nobility and a main figure in the "Hat Party", Landmarskalk Fredrik Axel von Fersen, then intervened to point out that, even with that money, the Swedish army would still be left without ammunition and would not have enough men to defend Sweden proper.

Fersen and Ehrensvärd did not trust the Russians who had been the main enemy of Sweden since the beginning of the XVIIIth centyry. In fact, they secretly disliked and depreciated Russians. One of the main political orientation of the “Hat Party” was indeed to always be prepared to take a revenge on the Russians when the occasion materializes and to retake the Baltic estates which Russia had previously wrested from Sweden. Furthermore, this party considered that the new Russian capital Saint Petersburg and its strong naval base at Kronstadt represented a constant threat against the Finnish provinces of Sweden.

On November 22, the Swedish fleet sailed into the Peene river.

As of November 28, Belling's corps consisted of hussars (27 officers and 1064 troopers) and Frei-Infanterie von Hordt (about 800 men).

At the beginning of December, weather deteriorated. It snowed and rivers froze. The Swedish fleet then quitted the Peene river and sailed for Stralsund. As the fleet evacuated the Stettiner Haff, Count Posse retired to Usedom with his Swedish detachment. The Prussian commander, Wilhelm Sebastian von Belling, decided to take advantage of this change of weather and began to concentrate his forces with the intent of launching quick actions against the Swedes.

On December 6, the Swedes evacuated Demmin. Belling divided his corps and sent I./Hordt to Gnoien and II./Hordt (aka Knobelsdorf bn counting 250 men strong) to Tessin. Belling also left 200 men in Demmin and 100 men in Anklam.

On December 10, Belling marched to Gnoien.

In the night of December 11, Belling attacked the Swedish posts at Volksdorf on the right bank of the Peene.

On December 12, Belling marched to Nehringen.

On December 13, a detachment of Belling's corps reached Damgarten while the main body returned to Meyenkrebs, a few km north of Demmin.

On December 14, Belling detachment resumed his advance northward to Randow and Rustow. The same day, the Swedish General Meijerfelt launched a raid against Anklam, capturing some prisoners.

On December 16, Belling's columns advanced to Loitz and Tribsees. Near Langenfelde, one of the column unexpectedly came across a Swedish detachment under the command of General Carpelan. After a brief skirmish, Belling marched on Jarmen, where he captured 1 officer and 45 men. Another detachment went by Dargun and finally reached Remplin.

On December 20, Major Knobelsdorf's detachment captured a Swedish patrol and drove back a detachment of Närke-Värmlands Infantry. The same day, at Gültzow (present-day Gültzowshof just north of Loitz), another detachment (280 men) of Närke-Värmlands Infantry supported by a battery under Lieutenant Johan Gabriel Unge repulsed a Prussian column (about 400 men of I./Hordt and 4 sqns of Belling Hussars). In this engagement, the Prussians lost several men. Wounded and dead were transported on coaches and 18 Prussians became prisoners of war or deserted.

However, the Duke of Mecklenburg complained to the Swedish commander-in-chief, Augustin Ehrensvärd, about the raids conducted by the Prussians into his duchy. Responding to his demand, Ehrensvärd decided to cross the Peene once again. He assembled an “Observation Corps” of 4 bns, 3 sqns and 200 hussars under the command of Meijerfelt. Ehrensvärd also recalled Sprengtporten's Freikorps from its winter quarters between Trebel (unidentified location) and Recknitz and sent it to Dargun.

On December 22, Sprengtporten reached Malchin where the Prussians had arrived ahead of him.

Malchin was an important supply magazine and town. The old field fortification had been destroyed in 1761 but the town walls were still in good condition. The town had 4 gates. From the north, access to the town was hampered by marshes and a branch of the Peene river. Another branch of this river made it difficult to access the town from the east through the Muhlen Gate. The Prussians prepared to defend the town by deploying infantry supported by three 3-pdr guns planted in the gardens in front of the Kalener and Wargentiner Gates. 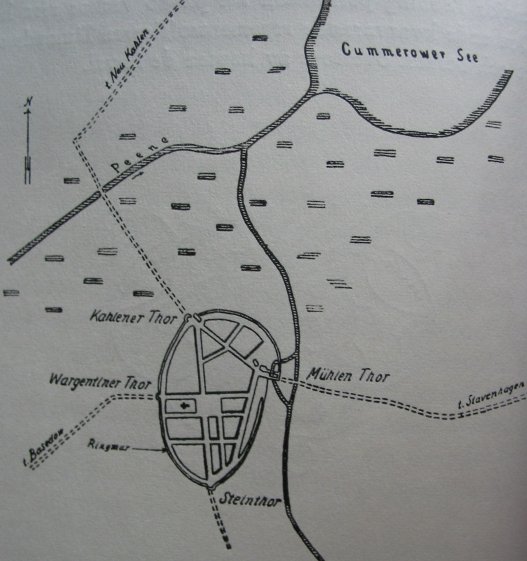 Source: illustration from a book by Teofron Säwe, from the collection of Magnus Petterson

The Swedes launched an assault in 3 columns supported by their artillery under Major Reinhold Anrep. The first column consisted of Freicompanie Sprengtporten and Otter and of 1 bn of Skaraborgs Infantry. This column advanced against the Kalener Gate. The second column, consisting of the II. Swedish Grenadiers (aka Sprengtporten Grenadiers battalion), marched directly on the gardens near the Wargentiner Gate. The third column, consisting of the I. Swedish Grenadiers (aka Cederström Grenadiers battalion) moved against the Muhlen Gate. The cavalry, the artillery and 2 coys of Jägers were kept in reserve during this assault.

The second column came across the old bastion defended by Golz with 2 guns. Golz opened canister fire, forcing the II. Swedish Grenadiers to retreat with heavy losses. The first column entered the city through the Kalener Gate pushing the defeated infantry back. When he noticed that the town had been taken, Golz retired. Sprengtporten's cavalry which pursued the retiring Prussian force was driven back to Malchin by Belling Hussars. In this action, the Prussians lost 120 men while the losses of the Swedes are not known. After the recapture of Malchin, Sprengtporten sent a small detachment south-westward to Basedow.

After the surrender of Colberg to the Russian army on December 16, the Prussian corps of Prince Eugen retraced its steps towards Western Pomerania (Vorpommern).

On December 25, Prince Eugen reached Stettin where he received new orders from Frederick II instructing him to march to Mecklenburg, where he should take his winter quarters.

On December 26, Prince Eugen marched towards Malchin by Pasewalk. His army, which had been recently beaten by the Russians, was in a rather poor condition. Some battalions counted only some 200 men.

On December 30, Prince Eugen reached Treptow (present-day Altentreptow), only 36 km east of Malchin. When Sprengtporten was informed of the imminent arrival of Prince Eugen, he considered retreating. However, Belling soon made this operation impossible by sending 400 men under Major Zulow to Neu Kalen on the road to Dargun, thus cutting Sprengtporten's line of retreat. Belling also made an attempt to storm Malchin.

After making a junction with Belling's corps, Prince Eugen had decided to destroy Sprengtporten's detachment. He divided his army, personally assuming command of the main body. The corps of Colonel Belling was reinforced by Lehwaldt Infantry (2 bns). Meanwhile, Schwerin took position to the rear of Malchin with Grabow Fusiliers (2 bns), Grenadier Battalion 13/26 Kalckstein and Grenadier Battalion 19/25 Woldeck.

Informed, that his line of retreat had been cut off, Sprengtporten realised that he had no other choice but to fight. He deployed his troops as follow:

On December 31, Sprengtporten declined Prince Eugen's summon and the Prussians launched their attack, managing to take possession of the suburbs. Combat ceased at nightfall.

On January 1 1762, New Year was celebrated by a bombardment. Then, the Prussians in 2 columns launched a second assault without effects. Their total losses since the first attack amounted to about 300 dead and wounded. For their part, the Swedes had lost 5 officers and 80 men. The same day, when Ehrensvärd saw the smoke from burning houses in Malchin, he immediately sent a relief force to rescue Sprengtporten's Corps posted in this town. Ehrensvärd personally commanded this relief force; while Lieutenant-Colonel Karl Constantin de Carnall led his vanguard (2,000 foot and 200 horse)

On January 2, to prevent this relief force from reaching Malchin, Belling marched on Neu Kalen. However, de Carnall arrived in the town ahead of him and deployed his infantry south of the town in two lines. De Carnall then attacked Belling in the Combat of Neu Kalen, forcing him to Pisede and then to Wendischagen.

Belling then crossed the Peene and made a junction with the Prussian Corps of the Prince von Würtemberg.

On January 6, the last engagement of the Pomeranian War took place between the two old adversaries: Sprengtporten's rearguard and the vanguard of von Goltz. The same day, the Prince of Württemberg reached Güstrow.

The end of the campaign

After the engagement of Neukalen, Prince Eugen abandon his plan to capture Malchin. The Prussian army retired and the Swedes cleared up Mecklenburg and then withdrew behind the Trebel-Peene line, leaving a garrison in Demmin.

The Prussians took their winter quarters in their old border posts as follow:

On April 7 1762, there was an initial cessation of hostilities which was followed, on May 22, by the Treaty of Hamburg. This treaty re-established the pre-war borders between the two states. General Augustin Ehrensvärd immediately retuned to Sweden after the signature of the treaty to look after a wound in the chest which he had received during the previous Summer offensive. After his departure, according to the treaty, Sweden evacuated Demmin and transported its army back home.

Old General Erik Lybecker then assumed command of the Swedish forces in Western Pomerania. Part of the artillery returned to Sweden in August. The re-embarkment of the Swedish army lasted till September 8 under the supervision of Generalkrigskommisarie Karl Sparre, Kommendör Johan von Rajalin and Kommendörkapten Krister Ludvig Jägersköld. The last contingent to embark for Sweden consisted of the indelta infantry regiments Upplands, Södermanlands and Västmanlands. Troops were embarked from Perd, on Rügen Island, on vessels of all sizes. The larger ships were used to transport units who had to undertake longer journeys to Stockholm, Hangöudd (Finland) and the naval fortress of Sveaborg near Helsingfors (present-day Helsinki). For the same reasons, smaller craft were employed to transport troops from Stralsund and Grönsvärd (on the other side of the Peene River opposite the small coastal Fort Peenemünde. On September 8, General Erik Lybecker left from Stralsund as the last commanding general.

Gunnar W. Bergman for additional information on this campaign and for the re-embarkement of the Swedish army after the Treaty of Hamburg