At the opening of the Prussian campaign in Silesia at the beginning of July, the Austrian General Brentano could count only on part of his corps. Indeed, 2 battalions of Loudon grenadiers, 1 grenzers battalion and Nádasdy Hussars had been sent to Burkersdorf (present-day Burkatów).

On July 3 at 11:00 PM, Brentano took position near Adelsbach (present-day Struga). His infantry deployed on a hill on the east side of a stream. Bethlen Infantry occupied the Sachsenberg, a battalion of Arberg Infantry took place behind Bethlen in the ravine One battalion of Warasdiner-Sankt.Georger Grenzers was thrown on the Engelsberg to the west Adelsbach while its second battalion joined it later during the combat. Two additional grenzer battalions were deployed to the right of the Sachsenberg. The rest of the grenzer light troops, along with 2 Jäger companies, occupied the marshes and light forest bordering the stream. Brentano placed Kálnoky Hussars on the left wing while Saint-Ignon Dragoons and Hessen-Darmstadt Dragoons were deployed in two lines on the right wing. Some cavalry was also sent to Reichenau (present-day Bogaczowice).

In the night of July 5 to 6, Neuwied's corps marched towards Hohenfriedeberg (present-day Dobromierz). When he saw that the position had been abandoned, Neuwied continued his advance towards Reichenau. Meanwhile, at midnight, Frederick had marched from the camp of Bunzelwitz (present-day Bolesławice) with Tchernichev's Russian corps.

On July 6 at about 4:30 AM, the vanguard of the Prussian corps of Neuwied appeared near Reichenau where it came to contact with Brentano's first outposts. The Prussians defeated the Austrian vanguard and drove them back, taking 33 prisoners of war among the hussars and grenzers.

When Frederick heard a cannonade in the general direction of Neuwied's corps, he hastened to join him with his cavalry. On his arrival, he ordered to dislodge the Austrians from the heights between Reichenau and Adelsbach.

With Austrian troops occupying the Engelsberg and Sachsenberg hills, it was almost impossible for the Prussians to approach Brentano's camp unnoticed. When his right wing column arrived on the field, Lieutenant-general Neuwied deployed it directly opposite the Austrian lines, between Hohenfriedeberg and Baumgarten.

However, the Austrians occupying these heights did not wait for the Prussian attack and retired to very steep positions behind Adelsbach where Brentano's entire corps was already deployed.

At this moment, the Prussian vanguard consisting of Frei-Infanterie von Wunsch and of some light cavalry attacked the Austrian positions on the Engelsberg. 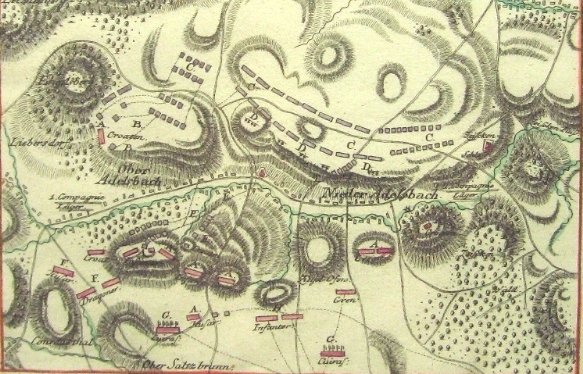 A – Austrian positions on the hill near Adelsbach
B – Assault of Frei-Infanterie von Wunsch, Bosniaken, Black Hussars and Russian cossacks on a battalion of Warasdiner-Sankt.Georger Grenzers on the Engelsberg
C – Prussian positions at Hohenfriedeberg and Baumgarten
D – Positions of the 5 Prussian batteries
E – Attack of Lestwitz Infantry, Zieten Fusiliers and Frei-Infanterie von Wunsch in 3 column upon the positions of Bethlen Infantry and a battalion of Warasdiner-Sankt.Georger Grenzers on the Sachsenberg
F – Flank march of Kálnoky Hussars, Saint-Ignon Dragoons and Hessen-Darmstadt Dragoons on the left wing of Bretnano's corps
G – Arrival of 10 cuirassier sqns (Erzherzog Leopold Cuirassiers and Prinz Albert Cuirassiers) with Kaiser Franz I Hussars
H – Arrival of Baden-Baden Infantry, Baden-Durlach Infantry and 1 grenadier battalion
I – Unsuccessful Prussian attack on the Austrian centre and right wing

Attack on the Engelsberg

Two grenzer battalions were deployed to the left of the Austrians positions on the Engelsberg. They were attacked by attacked by the Bosniaken and Cossacks, supported by hussars. The Austrian light troops broke and fled to the nearby forest where they were chased by Frei-Infanterie von Wunsch.

After this preliminary fight, Frederick II ordered Neuwied to launch an immediate attack on the Austrian troops occupying the Sachsenberg. Indeed, Frederick feared that reinforcements sent by Daun, who was in the vicinity, would reach Brentano before the Prussian infantry had managed to capture the village.

Assault on the Sachsenberg

The Prussian infantry advanced through the village of Adelsbach under the fire of the Austrian batteries towards the Sachsenberg. This Prussian force consisted of Lestwitz Infantry, one battalion of Zieten Fusiliers and Frei-Infanterie von Wunsch. These units adopted the oblique order and marched in 3 columns without any battalion gun. In fact, the difficult terrain made it impossible to bring any artillery with them. However, their advance and attack were supported by a heavy fire of the 5 Prussian batteries totalling about 13 guns. Furthermore, 6 Prussian horse artillery guns which had just been planted on the newly conquered Engelsberg joined this artillery support.

The Prussian infantry advanced. It then started to climb the steep slope. Meanwhile, the Prussian artillery fire was directed against the positions of Bethlen Infantry and of the battalion of Warasdiner-Sankt.Georger grenzers. This fire was quite ineffective against these well positioned troops. Seeing this, Frederick, realising the great difficulties of such an attack, sent orders to cancel it. Most Prussian units retreated but the 5 leading bns were already engaged when they received the new orders.

After incredible efforts, the 5 exhausted Prussian bns reached the top of the heights where their attack collapsed in front of the deadly fire poured on them by the Austrians from their uphill position. The fire of the grenzer light troops was particularly deadly.

Then, Colonel Tiller led Bethlen Infantry in a counter-attack at the point of bayonets. The attack of this Hungarian regiment was supported by a grenadier battalion. Frederick then ordered to redouble fire.

Meanwhile, Tiller's counter-attack had been quite successful and his soldiers had captured 3 colours. Many Prussian soldiers, especially from the Frei-Infantry, took advantage of the difficult terrain and “disappeared”. The second battalion of Zieten Fusiliers and Braun Fusiliers didn't take part in the attack.

During, the fight on the Sachsenberg, Brentano ordered his cavalry to undertake a flanking movement. Austrian hussars and dragoons were moved to the left of Bethlen Infantry.

Meanwhile, the reinforcements sent by Daun arrived to support Brentano. Ten squadrons (Prinz Albert Cuirassiers and Erzherzog Leopold Cuirassiers) took position behind the hills while Baden-Baden Infantry and Baden-Durlach Infantry deployed on the right wing. Finally, 3 grenadier battalions (2 from Brentano's corps and 1 from reinforcements) took position on the road to Fürstenstein. Kaiser Franz I Hussars were deployed on the left wing.

The Prussians launched another assault against the Austrian centre but were repulsed once more.

The left wing column of Neuwied's corps finally reached the battlefield. By this time, the Austrians had already received reinforcements sent by Daun and the Prussian right wing had already launched a bloody attack on the Austrian positions.

The failure of the Prussian attack delayed Neuwied's advance for one day, giving enough time to Daun to support his magazines at Braunau (present-day Broumov).

In this affair, Neuwied's corps lost 19 officers and 1,333 soldiers:

The Austrians lost 41 killed, 140 wounded and 68 prisoners or missing, for a total of 249 men. A further 33 men had been captured at their post during the initial Prussian advance.

N.B. : the exact composition of Neuwied's left column is not known. As per Gieraths in his book Die Kampfhandlungen der Brandenburgische-preussischen Armee (p. 363), the units of this second column were:

Another approach to reconstruct Neuwied's order of battle is to consider the composition of his corps a few days before, on July 1 1762