The regiment was established by an Empress's order of March 30, 1756 and raised in June 1756 by P. A. Rumyantsev with the third grenadier companies (200 men) of the following line infantry regiments which were thus reduced to two grenadier companies per regiment:[2, 3]

N.B.: the official regimental history book [1] rather lists the following regiments; however four of them are also listed in other sources among those used for the raising of the [[2nd Grenadier|2nd Grenadier Regiment]:

The companies were to be detached from their initial regiments being fully equipped with armament, baggage and horses. Soldiers and officers were not to be transferred between companies. Many lower ranks were discarded due to poor health or insufficient height and replaced by more suitable ones. Rumyantsev also discarded 12 of the 60 initial officers mostly for illness and senility.

During its establishment, the regiment was encamped in Dreilingbusch near Riga and was commanded by Major Count Kozlovskiy detached from Novgorodskiy Infantry for this duty. On July 3, 1756, he was replaced by Premier-Major Alexey Stupishin who nominally commanded the regiment for 1,5 month until Lieutenant-Colonel Alexey Maslov arrived. Meanwhile, Colonel Stepan Yazykov had to complete his duties in the Military Collegium in Saint-Petersburg and was finally able take command of the regiment during the winter of 1757.

Officers included 4 staff-officers, 9 captains, 21 lieutenants, 31 sub-lieutenants and 2 adjutants. Staff-officers were between 33 and 38 years old, companies' captains between 29 and 40 years old, and lower officers between 17 and 41 years old. Overall, 84% of officers were of noble birth, others were commoners, 13% were foreigners from Prussia and Courland. By the end of the summer of 1756, the regiment had completed its formation and equipment, including regimental baggage. For the first time, grenadiers were to use grenadier mitres and leather equipment bearing the coats of arms of their former regiments. Fatigue caps were made of red cloth with yellow pompom and laces.

On October 30, 1756, the regiment left the Dreilingbusch camp and took up its winter quarters in the suburbs of Riga.

In 1757, the regiment took part in the campaign in East Prussia under Field-Marshal Count Apraxin. On August 30, at the Battle of Gross-Jägersdorf, it was part of Lubomirsky's Brigade belonging to the Reserve. When the Russian Army deployed, it was placed in the reserve of the centre.

On July 23, 1759, the regiment took part in the Battle of Paltzig where it was attached to the 1st Division commanded by Fermor. It was deployed in Panin's Brigade on the right of the first line of the infantry centre. A few weeks later, on August 12, the regiment fought in the sanguinary Battle of Kunersdorf where it was deployed in the first line of the centre 2nd Division as part of Panin's Brigade. 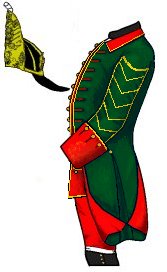 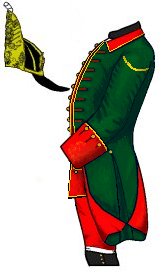 Colonel Colour: white field with, in its centre: an Imperial Eagle bearing on a central breastplate the illustration of St. George killing the dragon. The breastplate encircled by the necklace of the St.George’s Order. The Imperial Eagle stands on a trophy of flags and grenadier equipment (mitres, grenades...). In the center of the trophy of flags stands a cipher PR (for "Premier Regiment"). The Imperial Eagle was surmounted by a cloud bearing Elizabeth's cipher in gold. In each corner: a black grenade on a red flame pointing at the centre.

Regimental Colours: red field with, in its centre: an Imperial Eagle bearing on a central breastplate the illustration of St. George killing the dragon. The breastplate encircled by the necklace of the St.George’s Order. The Imperial Eagle stands on a trophy of flags and grenadier equipment (mitres, grenades...). In the center of the trophy of flags stands a cipher PR (for "Premier Regiment"). The Imperial Eagle was surmounted by a cloud bearing Elizabeth's cipher in gold. In each corner: a black grenade on a white flame pointing at the centre.