The regiment was raised in 1641 as the Terço of Entre Douro e Minho. In 1657, another Terço was created in the same province and the original one became known as the Terço Velho (old regiment).

The regiment recruited in the villages of Viana, Ponte de Lima, Monção, Vila Nova de Cerveira, Arcos de Valdevez and Ponte da Barca, and in various towns of the district of Viana.

In 1762, the regiment was divided into two distinct regiments.

N.B.: Even though these two regiments were officially designated as 1st and 2nd Monção, some authors refer to them as the 1st and 2nd Minho, others as 1st and 2nd Viana. In fact "Minho" was the old name of the unit prior to 1707, while the nickname "Viana" was first introduced only in 1763 and it is not until 1792 that the regiment was officially renamed "Infantry Regiment Viana".

On May 10 1763, the two units were reunited into a single regiment.

At the beginning of the campaign of 1762, the regiment was assigned to the corps operating in the region of Beira under the command of lieutenant-general Townshend. 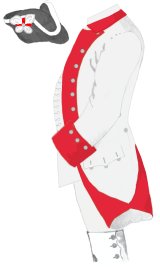 The drum barrel was ochre with red rims and black cords. The drum belt was white with a brass buckle.