Military service was extended to all adult male population: half always being on active service, patrolling the borders. Each district had to supply one company of hussars and one company of light infantry. The 20 companies of hussars (approx. 4,000 men, including non-combatants) formed the 1st Novoserbskiy Regiment: 10 active and 10 in reserve.

In 1757, the population of New Serbia numbered 5,482 inhabitants, including:

In January 1758, the 10 active companies of the regiment took part in the Russian invasion of East Prussia. By June 4, the regiment (about 1,000 men) had arrived at Bromberg. In July, it also took part in the invasion of Brandenburg. On August 25, the regiment fought in the Battle of Zorndorf where it was part of the second line of the cavalry left wing. At 3:00 p.m., it charged and captured the large Prussian battery planted on the extreme right wing. Continuing its advance, it charged the I./Prinz von Preußen in front and flank but was repulsed. On September 11, during the retreat of the Russian Army, the regiment was part of Rumyantsev's Corps who made a junction with the main army at Landsberg and encamped on the left bank of the Wartha. About mid November, the regiment took its winter-quarters in Morung as part of Resanov's 2nd Division.

On August 12 1759, the regiment fought in the Battle of Kunersdorf where it was partly deployed in the vanguard behind the cossacks as part of Riazanov's light cavalry brigade and partly behind the Austrian Grenzers in the first line of the right wing. The same year, troopers belonging to the regiment, formed the kernel of the new Makedonskiy Hussars and Bolgarskiy Hussars. 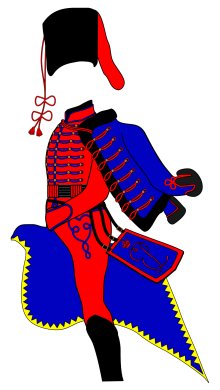