In 1678, a division of “Mounted Granadeers” was added to each of the 3 Life Guards companies garrisoned in London. A Horse Grenadiers received only half the pay of a Life Guard. Their uniform and fighting methods were those of dragoons with the addition of the grenade.

In 1680, the Horse Grenadiers were disbanded but soon reestablished in 1683. It consisted of 2 companies. From 1687, the unit was known as the “1st Troop of Grenadiers”.

During the Williamite War in Ireland, on July 11 1690, the Horse Grenadiers took part in the battle of the Boyne, near Drogheda.

During the Nine Years' War, the Horse Grenadiers served in the Netherlands. On August 3 1692, they took part in the battle of Steenkerque.

During the War of the Austrian Succession, in 1742, the unit was sent abroad for service. The troop was at the battles of Dettingen (June 27 1743) and Fontenoy (May 11 1745). It was then recalled to Great Britain at the outbreak of the Jacobite Rising.

During the Seven Years' War, the troop was under the command of:

In 1788, the troop was amalgamated with the 1st Troop of Guards to form the 1st Regiment of Life Guards.

At the outbreak of the Seven Years' War, the troop consisted of 1 squadron counting 150 men.

As of May 30 1759, the troop was stationed in England. It remained in Great Britain throughout the war.

Troopers were armed with a sword, a pair of pistols, grenades, a musket and a bayonet. Horse Grenadier Guards rode black horses.

Drummers and oboists rode grey horses. They wore red uniforms with blue facings, the whole heavily laced in gold. Their swords had a broken blade because they were not considered as combatant.

Regimental Standard (as per Funcken): dark blue field, fringed gold; centre device consisting of a rose and thistle on the same stalk surmounted by a crown (yellow with red cushions, white pearls and ermine headband); a white scroll carrying the motto "Dieu et mon droit" in black below the centre device; 3 smaller crowns below the scroll (identical to the larger crown depicted above). 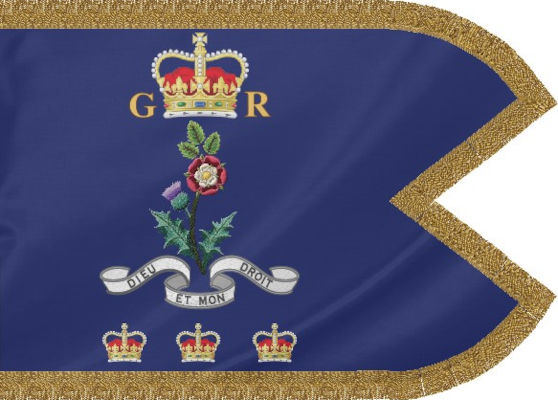 Troop Guidon – Source: Richard Couture as per a template by PMPdeL

Mills, T. F., Land Forces of Britain the Empire and Commonwealth (an excellent website which unfortunately does not seem to be online any more)