At the beginning of the campaign of 1762, the regiment was assigned to the corps operating in the Tras-os-Montes country under the command of lieutenant-general Cary. 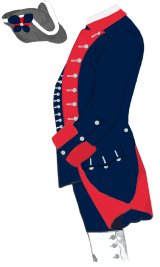 Musicians of the regiment wore uniform identical to those of privates with the following differences: