In September 1762, the regiment was divided into two distinct units: the 1st and 2nd Armada regiments.

During the Seven Years' War, the 2nd regiment was under the command of:

When the count of Lippe-Bückeburg reorganized the Portuguese army in 1764, the regiment retained its designation of “2nd Armada”.

The uniform described in this section is based on an illustration of the 2nd Armada Regiment in 1783. However, it seems that green with red distinctions had been the uniform of the Armada Real regiment since 1723. 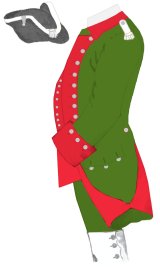