At the beginning of the campaign of 1762, the regiment was assigned to the corps operating in Beira country under the command of lieutenant-general Townshend. 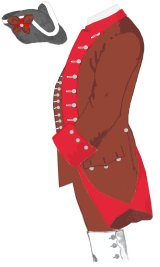