Presumably the oldest unit in the Army at the time of the 1809 reductions. The regiment was raised in 1280 among the nobility assuming its feudal service. In 1425 it consisted of 300 mounted marksmen. In 1565, it became the "Noble Cavalry" and received its designation of "Adelsfanan" in 1571. By 1640, the regiment counted 3 companies in Sweden and Finland. The same year, it was increased to 4 companies. After the annexation of Scania in 1658, a fifth company was added to the regiment.

In 1680 Karl XI organised the unit in 6 companies of which one was from Finland.

During the Great Northern War, the regiment was sent to the Livland in 1702 and with the King's Army thereafter, the Östgöta-Smålands company with the Lewenhaupt Army and the Finnish company with the Army of Finland. In 1706, it took part in the battle of Fraustadt. In 1709, it was taken prisoner by the Russians at Perevolotjna after Poltava. Rebuilt 1709-10, it took part to the Scanian campaign and the battle of Helsinborg, 1710, with two companies. In the Norwegian campaigns of 1716 and 1718.

After the Great Northern War, the regiment was prohibited to serve outside the territories of Sweden and Finland.

The regiment consisted of 395 cavalrymen in 6 companies. However in peacetime, only the officers were really present. Five of these companies came from Sweden (Uppland, Västergötland, Södermanlands, Östergötland and Skåne) while a sixth was raised in the provinces of Turku and Pori in Finland.

The regiment did not take part in any campaign during the Seven Years' War. 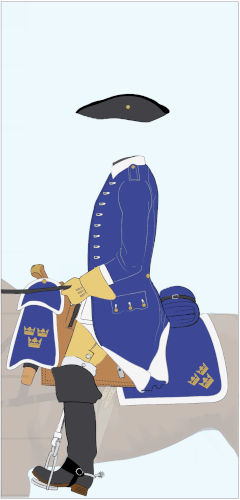 The musicians wore mediu blue uniforms with white swallow nests laced yellow at the shoulders. The uniform had no additional laces.