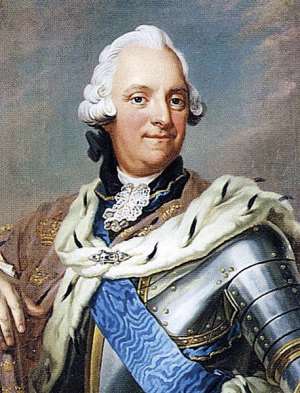 Adolf Fredrik was the son of Christian Augustus of Holstein-Gottorp, Prince of Eutin and of Albertina Frederica of Baden-Durlach. On his mother's side, Adolf Fredrik descended from King Gustav I of Sweden and from Christina Magdalena, a sister of Charles X of Sweden.

In 1739, at the death of his cousin Karl Fredrik, Prince Adolf Fredrik became administrator of Holstein-Gottorp during the minority of his nephew, Duke Charles Peter Ulrich (afterwards Peter III of Russia)).

In 1741, when Elizabeth Petrovna seized power in Russia, she asked to Prince Adolf Fredrik, to sent Duke Charles Peter Ulrich, her nephew and heir, to Russia. Thus Prince Adolf Fredrik acquired a powerful support for his attempt to become king of Sweden.

On June 23 1743, after the failure of the parliamentary government failure to reconquer the Baltic provinces in 1741-43, Adolf Fredrik, with the support of Russia, was elected heir to the throne of Sweden by the Hat faction in order that they might obtain better conditions at the Peace of Turku from Empress Elizabeth of Russia, who had adopted his nephew as her heir.

In 1744, Adolf Fredrik married Louisa Ulrika of Prussia a sister of Frederick the Great. The young couple initially sided with the Hat Party. But when they realized that this party had not fulfilled its promises, they took their distance.

On 25 March 1751, on the death of King Fredrik I av Hessen, Adolf Fredrik became King of Sweden, being crowned on November 26. Nevertheless, he was not a Russian puppet and soon broke with Elizabeth. In fact, King Adolf Fredrik was little more than a figurehead, the real power being assumed the Riksdag of the Estates. However, his wife, Louisa Ulrika, through her attempts to increase the power of the king gave rise to numerous party battles. The royal couple soon entered in open enmity with the Hat Party. A new party assembled around the royal couple to support its now openly prominent quest for expanded power.

To gain popularity, King Adolf Fredrik travelled in the provinces of his realm, even visiting Finland. Meanwhile, the conflict worsened between the king and his council regarding the limits of the king's personal influence on the government, almost paralysing government.

In 1755, Adolf Fredrik endeavoured to free himself from the tutelage of the estates. Indeed, stimulated by his imperious consort Louisa Ulrika, he tried to regain a portion of the attenuated prerogative.

In June 1756. the king's supporters failed in their attempt to seize power. Several of them were executed. The king and the queen then received an ultimatum to either recant their claims or lose their thrones. Afterwards, all decisions of the parliament were submitted to the king for approval but their application could move forward after two ignored attempts. Virtually, the king had no power left to influence the policies of his realm.

In 1768, under the guidance of his eldest son, the Crown-Prince Gustav, Adolf Fredrik succeeded in overthrowing the "Cap" senate, but was unable to make any use of his victory.

King Adolf Fredrik died on February 12 1771 after having consumed a large meal. He is thus remembered by Swedish school children as "the king who ate himself to death."

He was regarded, both during his time and in later times, as dependent on others, a weak ruler and lacking of any talents. But he was allegedly also a good husband, a caring father and a gentle master to his servants. His favourite pastime was to make snuffboxes, which he allegedly spent a great deal of time doing. His personal hospitality and friendliness were witnessed by many who deeply mourned him at his death.

Most of the text of this article is taken from the following articles of Wikipedia: