The unit was initially established in 1535 as the Tercio de Sicilia.

In 1598, the unit was renamed Tercio fijo de Sicilia.

On July 1 1707, the tercio was transformed into a regiment which initially counted a single battalion. The regiment was sent to Sicilia in 1708 and remained in the island until the departure of the Spanish army in 1714 when it returned to Catalonia.

In 1718, the unit was officially designated as the Africa regiment.

In 1720, the regiment garrisoned Pampeluna.

In 1731, the regiment was sent to Ceuta to assume garrison duty.

In 1733, at the beginning of the War of the Polish Succession, the regiment was recalled to Spain before being sent to Tuscany in Italy where it took its winter quarters. In 1736, it evacuated Tuscany and sailed for Spain, 3 companies were lost at sea during this journey.

During the War of the Austrian Succession, the regiment was sent to Savoy in 1741. In 1742, it crossed the Alps, captured the castle of Aspremont and, at the beginning of winter, fought in the gorges of Mians. In 1743, it fought at Aigue-Ville against the Sardinian army. On July 24 of the same year, it took part to the attack against the castle of La-Tour-du-Pont. In 1744, the regiment was part of the Spanish army of Italy under the command of the marqués de Castelar. On April 8, it took possession of Peglio and Castiglione. On April 14, the regiment took part to the victorious attack on the Piemontese entrenchments around Villefranche. It then stormed Château Dauphin. On September 30, it took part to the victorious battle of Madona del Olmo. It then took its winter quarters at Demonte. At the beginning of the campaign of 1745, the regiment defended the defile of La Bocheta in the territory of Genoa. It later joined the Aramburu division encamped at Castel-Nuovo de Scrivia. On July 28, the division was ordered to cross the Tanaro river under the fire of the Austro-Sardinian army. During this battle of Basignana, the regiment formed the head of the Spanish division and crossed to the left bank in front of 5 Piemontese battalions and 4 guns, pushed them back and secured the position. During the subsequent sieges of Alessandria and Valenza, the regiment was encamped at Basignana to cover these operations. It was then moved to the outskirts of Valenza during the last days of the siege. The place surendered in mid-October and the regiment was transferred to Lazzarone. At the beginning of 1746, the regiment advanced to Boffalora on the Ticino River. Shortly after, it marched on Codogno, Casale, Vercelli, crossed the Po, advanced through Gualtieri and Guastalla, and entered into Reggio. However, an Austrian counter-attack forced the Spanish division to retire from Reggio. During this retreat, Africa covered the march of the army and repulsed the ennemy. The Spanish division manged to reach Mulazzano near Milan. On June 15, the regiment took part to the failed attack on the Austrian camp at Piacenza. The Franco-Spanish army retired through Codiogno, Voghera and La Bochetta, and entered into Nice county and Provence. In 1747, as part of the Franco-Spanish army, it retreated to Provence and passed the Var river on June 3, resuming its march to Nice. During the retreat, the regiment took an active part to the recovery of Monteblanco and Villefranche. It also fought at Menton on June 20, seizing some important fortified works. In 1748, the regiment returned to Spain where it garrisoned Barcelona.

In 1752, the regiment was transferred to the Balearic Islands for garrison duties.

In 1753, the grenadiers of the regiment, under the command of Don Antonio Barcelo, took part to a naval expedition during which, on July 23 near the town of Cabrera in the Balearic Islands, a Turkish galiot was attacked and boarded.

During the Seven Years' War, the regiment ranked 7th and was under the command of:

In 1758, the regiment was transferred the Balearic Islands to Barcelona.

In 1761, the regiment garrisoned Cartagena.

In 1762, when war broke out with Portugal, the regiment was among the Spanish units involved in the conflict. It quitted Cartagena, passed through Castilla and made a junction with the count de Maceda's division. This division broke through the Portugueses lines and reached Almeida which was then besieges by a Spanish army. The regiment distinguished itself at the capture of Almeida which was the main event of this campaign. After the capture of this place, it advanced to the banks of the Tagus. On September 6, it bivouacked at Aldea Nueva under the command of general Mendoza. On September 27, the grenadiers of the regiment, as part of the vanguard, took position not far from the lines of the Talladas near Villabelha which had been abandoned by the enemy. On October 15, the regiment occupied Castelo Branco. On November 14, it took its quarters in Zarzuela. 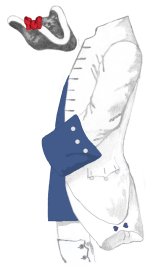 The coronela (colonel flag) of the regiment was white with a red Burgundian cross terminated in each corner by a medallion carrying the arms of the regiment (on a gold field: a savage standing over a crouched lion and holding a half-moon in his right hand and a snake in his left) surmounted by a golden crown. In the middle: the arms of Charles III surrounded by the necklace of the order of the Toison de Oro (Golden Fleece).

The batallonas (ordonnance flags) of the regiment were white with a red Burgundian cross terminated in each corner by a medallion carrying the arms of Savoy (on a gold field: a savage standing over a crouched lion and holding a half-moon in his right hand and a snake in his left) surmounted by a golden crown.