Difference between revisions of "Alsace Infanterie"

Charles VIII had been the first king of France who in 1486 took German lansquenets in his service. Since that time and until the Revolution, there has always been German troops in the French army. At the death of Gustavus Adolphus of Sweden in 1632, all German regiments of his army were taken in the French service.

On April 16 1656, a treaty was signed between the king of France and Jean Louis de Nassau-Weilburg, Comte de Nassau-Ottweiler and Comte de Nassau-Saarbrück for the creation of Alsace Infanterie. However, even though the regiment wore the name of a province, it was not considered a provincial regiment. In fact, throughout the Ancien Régime, it was considered a foreign German regiment owned by its successive colonels.

In May 1696, the eldest son of Christian II, Christian III, Comte palatin de Birkenfeld-Bischweiler succeeded him at the head of the regiment. The latter became Duc de Deux-Ponts in 1731.

In 1757, the regiment was supposed to be part of the Auxiliary Corps that should be sent to support Austria. Events in Germany changed this initial plan and the regiment was sent to the Army of the Lower Rhine. From April 27 to June 17, the regiment was part of the Reserve under the Prince de Soubise. On July 26, the regiment was at the Battle of Hastenbeck where it formed part of the right wing under d'Armentières. It attacked a strong redoubt at the outskirt of a forest where one of its captains captured 8 guns and 2 howitzers. After the victory, the regiment was part of the vanguard under the Duc de Richelieu in charge of the conquest of Hanover. In August, it took part in engagements at Rotheburg and Otterberg. On September 3, it was ordered to move to Kloster-Zeven, along with all the grenadiers. On September 4, it was at the combat of Bevern. After the Convention of Kloster-Zeven on September 8, it followed the main body, led by the Maréchal de Richelieu, who encamped at Halberstadt from September 28 to November 5. The regiment was placed in the centre of the second line. When the Allies repudiated the Convention of Kloster-Zeven, the regiment advanced against them and took part in an engagement at Vegesach. It also participated in the capture of Bremen where it finally took its winter-quarters in the first line of the French army.

At the end of January 1758, the regiment was once more assigned to the corps destined for Bohemia to assist Austria. However, in February when Ferdinand of Brunswick launched his winter offensive in West Germany, the regiment retreated towards Düsseldorf and Deutz with the bulk of Broglie's Army. From March 30 to April 4, it was in the first line of Clermont's Army in the camp of Wesel on the Lower Rhine. It passed the Rhine on April 3 and 4. By July, it had joined Soubise's Army assembling near Friedberg in Hesse. On October 10, it was present at the Battle of Lutterberg where it was placed in the centre of the first line.

By May 23 1760, the regiment was part of the left reserve of the first line of Broglie's Army, placed under the command of Saint-Germain. On June 17, the regiment was part of a small division, under M. de Leyde, who reached Düsseldorf, on its way to join Saint-Germain. On July 4, as part of d'Auvet's Division, it reconnoitred the area of Arnsberg. On July 31, the regiment was attached to the Corps of Maréchal-de-Camp de la Morlière posted at Welda 6 km to the south of Warburg in support of de Muy. On October 3, Ségur's Corps (including this regiment) was dispatched towards Hachenburg and Cologne. On July 31, the regiment took part in the Battle of Warburg where it was deployed in the first line of the left wing. On October 13, the regiment arrived at Neuss with Castries. On 16 October, it played an active role in the Battle of Clostercamp where it was posted in the first line of the left wing who bore the brunt of the attack of the Allies. At the end of October, the regiment, who had heavily suffered at Clostercamp, was sent back to France. 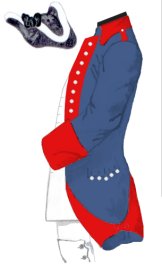 Ordonnance colours: a white cross, their first and fourth cantons were red, their second and third green. These ordonnance flags remained unchanged from 1656 to 1791.