The regiment was raised in 1761 by Fürst Friederich August von Anhalt-Zerbst to serve with the Austrian Army. It consisted of a single battalion of 4 coys, of 500 infantrymen, 50 cavalrymen, few regimental pieces with 20 "technics". According to Duffy, it was "an under-strength unit of undersized soldiers, and of little military use." The eccentric Fürst Friederich August was politically valuable as a Protestant Prince of Northern Germany and as the brother of Catherine (later "the Great") then wife of the Russian Heir Duke Peter of Holstein-Gottorp.

At the end of the Seven Years' War, in 1763, the regiment assumed garrison duty in Philippsburg until 1767. It was then retroceded to the Principality of Anhalt-Zerbst.

In 1762, the regiment was attached to the Reichsarmee and took part in the campaign of Saxony. There are no further records apart the following losses: prisoners 3, died in hospital 113, deserted 138.

The uniform illustrated is taken from a copy of a contemporary print produced originally as an aid to recruiting. 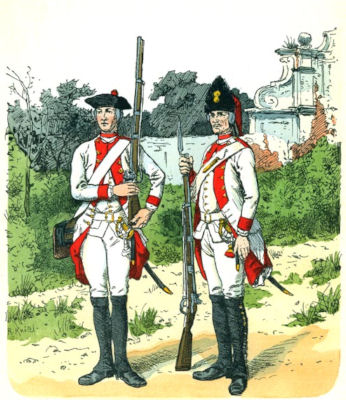 Privates were armed with a musket, a bayonet and a brass hilted sword

The officers probably wore the same uniform as the privates with the following exceptions:

Duffy, Christopher - By Force of Arms, Vol. II of The Austrian Army in the Seven Years War. The Emperor Press, 2008