The regiment was raised in the canton of Schwiz in 1742. In 1743, the regiment counted 2 battalions.

When the Swiss infantry was reorganised in 1756, the regiment counted 2 battalions, of 4 companies each. This reorganisation was completed only in 1758. 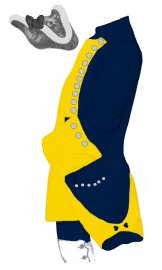 According to the regulation of 1749, the coronela (colonel flag) of each Swiss regiment was white and carried the royal arms in its centre (the arms of Charles III probably surrounded by the necklace of the order of the Toison de Oro).

The batallonas (ordonnance flags) of the regiment were yellow with a red Burgundian cross terminated in each corner by 5 flames (blue, white, red, white, blue).