When the count of Lippe-Bückeburg reorganized the Portuguese army in 1764, he divided the regiment into the 1st and 2nd Marine Regiments. These two regiments were abolished in 1797 and replaced by the Brigada Real de Marinha (Royal Marine Brigade).

On October 12 1762, auditor-general Miguel de Arriaga wrote to the count of Oeiras, and sent him, among others, these complaints by the marshal (probably the count of Lippe-Bückeburg), that "our army was under the gun with 3,020 soldiers, but the Armada and Swiss regiments have not appeared nor the small pieces with which they defended the mountains, and, finally, that success depended on the hand of God, but that he would exhaust all their efforts."

The uniform described in this section is based on an illustration of the 1st Marine Regiment in 1764. Furthermore, it seems that green with red distinctions had been the uniform of the Armada Real regiment since 1723. 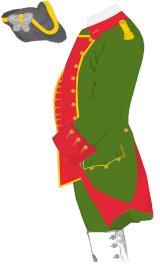 Condray, Pat; The Portuguese Army during the War of the Spanish Succession , 1992

Manuel Ribeiro Rodrigues and Joseph O'Neil for the initial version of this article.