The tercio was created on 6 July 1703 for the “Maestre de campo” Viscount del Puerto. It consisted of only 600 men (arquebusiers and pikemen). It initially served in Galicia along the Minho River on the Portuguese border and made itself master of the Island of Calderas. In January 1704, the tercio was ordered to relieve the Tercio Provincial de Valladolid in Ciudad-Rodrigo. It took part in an engagement between Alfayate and Villamayor, in the unsuccessful defence of Ciudad-Rodrigo, in the fight against the insurgents in the districts of Tudela, Cascante and Tarazona, in the siege of Magallon and in the storming of Egea de los Caballeros defended by Aragonese migueletes. It then guarded the lines between Sádaba and Sangüesa. The same year, it was reorganised as a regiment. On February 28 1707, the regiment was renamed “Regimiento de Asturias”. The same year, it took part in the relief of Jaca, in the capture of Ainza, in an engagement with the insurgents at Lascuarre, in the attack on Naval and in the engagement of Benavarre. In 1708, the regiment took part in the defence of Lérida and in the siege and capture of Tortosa. In 1709, it embarked at Alicante for the Island of Elba. In 1710, the regiment sailed for the Island of Sardinia but the British forced the expedition to re-embark and to take refuge in Corsica. From September 1711, the regiment took part in an expedition on the coast of Tuscany. In 1712, it retired from Tuscany to Sicily. In 1714, it returned to Spain. On their way, three companies were attacked by Turkish corsairs near Mahon and forced to jump ashore. The rest of the regiment resumed its journey and, upon its arrival in Spain, took part in the blockade of Barcelona where it was soon joined by the three companies left at Mahon. On May 17, the regiment took part in the assault on Fort Capuchinos. From July 16, it worked at the trenches until the general assault on 11 September. On that day, along with six other battalions, it entered into Barcelona by the breach at the Puerta-Nova.

On 20 April 1715, the regiment incorporated the disbanded “Regimiento de Salamanca” as its second battalion.

In 1718, the regiment embarked at Cádiz for the planned reconquest of Sicily. It first sailed to Barcelona in Catalonia and then to Cagliari in Sardinia. It then took part in the siege and capture of Messina and in the Battle of Milazzo. In 1719, it fought in the Battle of Francavilla. In 1720, it sailed back to Barcelona.

In 1723, the regiment was sent to the Balearic Islands to assume garrison duty. In 1727, it returned to Catalonia.

In 1732, the regiment formed part of the forces who recaptured Oran.

In 1734, during the War of the Polish Succession, the regiment returned to Spain and was immediately sent to Italy and then to Sicily. In 1736, it was transferred to Tuscany before returning to Spain.

In 1741, at the outbreak of the War of the Austrian Succession, the regiment marched through Languedoc and Provence to join an army for the planned invasion of Savoy. In 1744, it took part in the attack of the entrenched lines of Villafranca, in the capture of Monte Albano, in the siege and capture of Demont; in 1745, in the siege of Valenza on the Po. In 1746, its second battalion defended the Convent of San Sixto and the regiment took part in the Battle of Piacenza. In 1747, it campaigned in the Genoan territory.

In 1748, at the end of the war, the regiment returned to Catalonia. In 1750, it was transferred to Galicia where it garrisoned Coruña and Vigo.

In 1755, the regiment was transferred to Extremadura to garrison Badajoz.

In 1762, the regiment was assembled in Badajoz. On August 11, the first battalion marched from Badajoz by Algarrovillas and Casar de Cáceres to join the army assembling for the planned invasion of Portugal. At the end of the campaign, the entire regiment was sent to Old Castile. 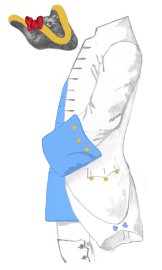 The coronela (colonel flag) of the regiment was white with a red Burgundian cross terminated in each corner by a medallion carrying the arms of the regiment (two cherubs carrying a crowned golden Victory cross) surmounted by a golden crown. In the middle: the arms of Charles III surrounded by the necklace of the order of the Toison de Oro (Golden Fleece).

The batallonas (ordonnance flags) of the regiment were white with a red Burgundian cross terminated in each corner by a medallion carrying the arms of the regiment (two cherubs carrying a crowned golden Victory cross) surmounted by a golden crown.