Miners were the oldest technical troops in the Austrian Army. As soon as 1716, Prince Eugène de Savoie established the first first permanent miner company. This company soon proved its value during the sieges of several Turkish fortresses.

During the reign of Maria Theresa, miners formed two companies attached to the Deutsche Feldartillerie. Each company consisted of 119 officers and men:

Each company was commanded by a major and a captain, assisted by 3 to 4 sergeants. Requirements to be accepted in these companies were very high: soldiers must come from the mines and be in robust health while officers must possess a good knowledge of mathematics, especially those having to do with mining and fortifications.

At the outbreak of the Seven Years' War, there were 2 companies of miners for a total of 238 men. Their quarters were in Bohemia and they were subordinated to the general-director of artillery.

Between August 4 and October 9 1762, miners took part in the defence of Schweidnitz and acquired an unforgettable reputation. During this siege, the commander of the detachment of miners was Captain Joseph Pabliczek. By laying mines and counter-mines under the glacis of the fortress, he led a busy mine warfare and made a significant contribution to the long and stubborn defence of the fortress who finally capitulated after the explosion of a powder magazine in Fort Jauernik. Pabliczek was later received in the Maria Theresa Order, in the eighth promotion of this military, for his conduct at Schweidnitz. 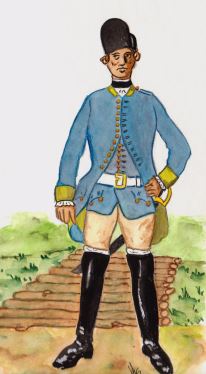 Each miner was armed with a sabre.