The regiment was raised in Bruges on 17 October 1670 by the Baron de San Juan as a “tercio de caballeria espanola”.

In 1718 the regiment, who had previously been designated by the name of its successive colonels, was renamed “Barcelona”. The same year, it took part in the siege of Messina in Sicily. In 1719, it fought in the sanguinary battle of Francavilla.

On May 2 1763, the regiment was disbanded and incorporated in Principe Cavalry. 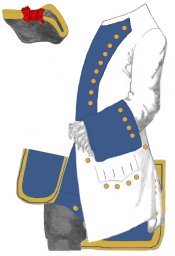 The standards were made of damask or silk, fringed and embroidered with gold. They had red and blue cravats with gold tassels.

Reverse: blue field, the border embroidered with a vegetal pattern; centre device consisting of the Royal Spanish Arms surrounded by the necklace of the Order of the Golden Fleece; corner device consisting a fleur-de-lys; all embroideries of gold.

This article is partly made of abridged and adapted excerpts from the following books which are now in the public domain: