During the War of the Polish Succession, the regiment served on the Rhine from 1730 to 1733.

During the War of the Austrian Succession, the regiment was initially stationed at Linz in 1741. In 1742, it returned to France after the capitulation of Linz (January 24). On June 27 1743, the regiment took part in the Battle of Dettingen. From 1744 to 1748, it then campaigned in Flanders.

In 1756, the regiment counted 4 squadrons and ranked 8th.

In 1756, at the outbreak of the war, the regiment was stationed at Fécamp.

In 1759, the regiment joined the French army operating in Germany. By October 25, now attached to d'Armentières' Corps, the regiment was posted at Castrop and Dortmund.

On January 7 1760, the regiment, who was occupying an advanced post at Wiselbach, was attacked by the 87th Keith's Highlanders supported by Luckner's Hussars. The French dragoons were completely taken by surprise and the Allies took 80 prisoners along with 200 horses and all their baggage. By May 23, the regiment was part of the left vanguard of Broglie's Army. On July 10, the regiment took part in the Combat of Corbach where it was attached to Broglie's vanguard under the Baron de Clausen, deployed in the woods to the left of Corbach at the beginning of the action. At the end of the combat, when the Allies retired, Prince Camille de Lorraine, galloping ahead of his cavalry corps took command of Beaufremont Dragons and Turpin Hussards and charged the troops retiring near the watchtower hill. So hard were Allied units pressed that the Hereditary Prince only extricated them by putting himself at the head of two squadrons of the 1st Dragoon Guards and 3rd Dragoon Guards and leading them to a desperate charge against the French hussars and the Beaufremont Dragons. The gallant British charge was far less successful than often told, 1 squadron being forced to lay down its arms and losing its standard in the action. By July 23, the regiment was at Wasbeck under the personal command of the Duc the Broglie. By December 30, two squadrons of the regiment had taken their winter-quarters in Hanau.

In 1761, the regiment took part in the campaign of the French army in Germany.

In 1762, the regiment returned to guard the coasts of France.

Musicians wore the livery of the House of Beaufremont: ventre de biche (reddish white) coat (as per Delaistre ca. 1720) with laced a plain white braid.

N.B.: In 1730, Lémau gives 3 red guidons fringed in gold and sown with gold bells which is another way to designate the heraldic champaine of the arms of the House of Beaufremont. 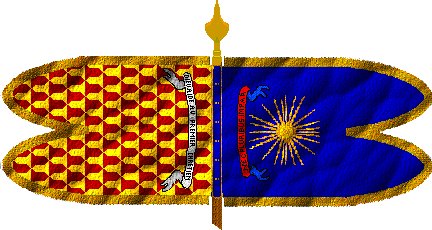 This article is mostly a translation Jean-Louis Vial's article “Bauffremont Dragons” published on his website Nec Pluribus Impar. The article also incorporates texts from the following books which are now in the public domain::