At the beginning of the Seven Years' War, the regiment counted 2 battalions. Each battalion consisted of 1 grenadier and 5 musketeer companies. The grenadiers of the regiment were amalgamated with those of Zastrow Infantry to form the Grenadier Battalion von Redecken.

During the Seven Years' War, the successive regimental inhaber were:

During the war, the regiment was in the British service.

On July 26 1757, the regiment took part in the Battle of Hastenbeck where it fought in the first line of the left wing under Lieutenant-General Imhoff.

On May 26 1758, the regiment was with the main force of Ferdinand of Brunswick in the camp of Nottuln. On May 31, it accompanied Ferdinand in his offensive on the west bank of the Rhine. On June 23, the regiment took part in the Battle of Krefeld where it was deployed on the left wing under the command of Lieutenant-General von Spörcken.

During the first half of 1759, the regiment formed part of the Allied Army of Ferdinand of Brunswick. It was attached to Behr's Brigade in the first line of the infantry centre. On April 13, the regiment took part in the Battle of Bergen where it formed part of the first column under the command of the Hereditary Prince of Brunswick. In June, the regiment was still part of the Allied main army under the command of Duke Ferdinand of Brunswick. On July 30, Gilsa marched from the Allied camp near Minden at the head of 3 bns, including the 1st battalion of this regiment, to take post at Lübbecke and maintain communication with the Hereditary Prince. On August 1, the 2nd battalion took part in the Battle of Minden where it was deployed in the first line of the 7th column under Major-General von Einsiedel; while the 1st battalion was deployed in Gilsa's detachment at Lübbecke. During the night of December 21, the regiment was cantoned at Kleinlinden when 1,200 men of the French garrison of Giessen made a sally to surprise it. However, the Allied piquets gave the alarm and the infantry repulsed the French attack, killing 20 men and taking 20 prisoners.

During the war, the unit was also engaged at Fulda, Fritzlar, Ziegenhain, Vellinghausen and Wilhelmsthal. 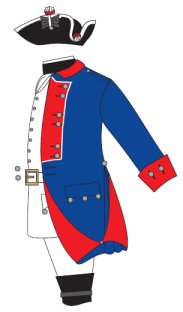 Officers wore uniforms similar to those of privates with the following distinction:

The officers of the grenadier companies wore tricornes and carried spontoons since 1754.

The drummers wore a dark blue coat with the collar, cuff, lapel and turnback the same as the troopers. The swallow nest on the shoulder was white while white lace edged the front of the coat.

N.B.: Kannik (see references) gives a yellow coat to musicians of all foot regiments of the Brunswicker Army. An explanation could be that the coat was yellow during the first years of the war but changed to blue when yellow waistcoats and breeches became white.

The drum had a brass base carrying the Brunswick coat of arms with a rim decorated with red and white diagonal stripes and with white cords.

New colours were introduced in 1754 when the Army of Brunswick was reorganised. These colours were of the the Prussian pattern with flames and corner monograms. There are no known surviving examples of the colours used during the Seven Years' War.

Here is a tentative reconstruction based on the general pattern of the colours used in 1776 during the American War of Independence and on the distinctive colour of the regiment. These colours are hypothetical.