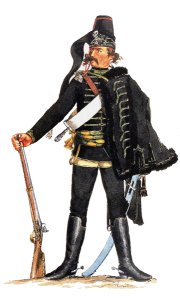 The regiment was created on February 16 1758 and raised in 1758 in Halberstadt from new recruits by Prince Henry of Prussia. It initially counted 5 squadrons and included drafts from other cavalry regiments. Exceptionally, each of its squadrons counted only 8 NCOs and 102 troopers, following the old establishment of 1755. In 1761, the regiment was increased to 10 squadrons and in 1762 it was raised again to 15 squadrons or 3 battalions, but the 3rd was disbanded at the peace of 1763.

The inspectorate of the regiment was Pomerania where it garrisoned Belgard, Bütow, Lauenburg, Neu-Stettin, Rummelsburg, Schlawe, Stolpe, and Zahnow.

The regiment was often referred to as Der ganze Tod (the whole death) because of the white skeleton with an hourglass decorating their mirlitons.

In 1763 the formerly Frei-Husaren Prinz Heinrich (later von Belling) officially took the rank of the “Red Hussars” and their red uniform in 1764. They garrisoned the town of Stolp (present-day Slupsk) where local peoples nicknamed them Die rote Löwen (the red lions). 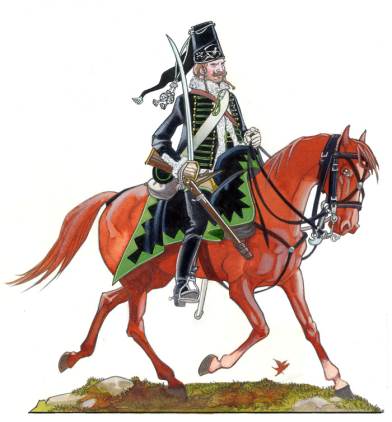 In 1758, the regiment initially served in Bohemia. On June 15, it fought in the combat of Rehau. By mid-July, the regiment had been transferred to Dohna's Corps to contain the Russian invasion of Brandenburg. On October 15, it took part in the raid on Freiberg where it cut down many of the enemy and took over 200 prisoners. On October 15, it was at the skirmish of Conradsdorf. Later, it fought in a skirmish near Passberg in Bohemia where it attacked an Austrian corps of 2,000 men and took it prisoner, complete with the commanding general. It then served in Franconia and in the Upper Palatinate before returning to Upper Lusatia.

On April 15 1759 at Sebastiansberg, 2 squadrons of the regiment (about 360 men) defeated 3 battalions, capturing 3 guns, 3 colours flags and more than 1300 men. On May 20, the regiment was at a skirmish near Liebau. On August 12, the 5 squadrons of the regiment took part in the Battle of Kunersdorf where it was initially deployed in the reserve of the left wing. It drove back the Russian cavalry from the Kuhberg. In September, now that the Russian army was no more a threat for Brandenburg, the regiment was transferred to Pomerania along with some light infantry as part of Manteuffel's Corps. In mid October, Manteuffel's Corps arrived at Pasewalk. On October 21, Manteuffel launched a surprise attack the town of Demmin. After this raid, the Swedish army retired to Anklam, harassed by Belling Hussars.

In 1760, the regiment took part in the campaign of Pomerania. On January 28, it was present at the clash near Anklam. On October 3, Werner was informed of the Austro-Russian raid on Berlin. Prince Eugen then precipitously abandoned the theatre of operation, leaving only a meager force (Belling Hussars and 2 bns of Frei-Infanterie von Hordt) under Colonel Belling to defend Pomerania. On October 19, Belling followed up the retiring Swedish Army and entered into Mecklenburg and put it to contributions. He then marched to Eastern Pomerania to put a stop to the incursions of the Russian Cossacks.

In February 1761, while stationed in Pomerania, Belling raised a third battalion for his hussar regiment. During the Swedish summer offensive, Belling ceaselessly manoeuvered to contain the Swedes. On July 31, the Swedes sent troops (1 Fribattaljon, Hästjägare and Blå Hussars) to Spantekow and Thurow to block the Kavelpaß. Major Schwartzer with 150 Hästjägare attacked the bridge at the Kavelpaß. After a furious fight, he drove back the Prussian infantry and captured the bridge. Schwartzer had barely seized the bridge when he was counter-attacked by 1 sqn of Belling Hussars led by Rullman and 2 sqns of Ueckermark Provincial Hussars under Hohendorf. In this skirmish, the Swedes lost 1 officer, 26 men and 36 horses. The lost of the Prussians are unknown. Belling then marched to Bartow where his hussars skirmished against Hessenstein's outposts in the woods. On the morning of August 6, Belling attacked the Ropenackerpaß where were 2 Swedish bns guarded the bridge. The Prussian were forced to retire in the face of a relief column led by Hessenstein hurrying up from Altentreptow. Belling retreated by Salow to Friedland. On August 7, fearing for his communications with Mecklenburg, Belling departed with 8 coys of Frei-Infanterie von Hordt, 700 men of Belling Hussars and 2 sqns of Ueckermark Provincial Hussars. He left only 2 Freikompanien and some men of Belling Hussars in Friedland. Belling made a wide detour south-westwards by Neubrandenburg. On August 8, Belling's horse caught up with the Swedes near Kentzlin. Major Platen had with him the Frikompanie Lillie along with 2 sqns of Blå Hussars, 150 Hästjägare and 2 guns. The Swedes took refuge in the houses and gardens of the village where they successfully defended themselves. During this skirmish both sides lost about 20-30 men. On the Prussian side, Major Hohendorf was wounded . After the combat, they exchanged prisoners. On the morning of August 14, 3 sqns of Belling Hussars attacked Hessenstein rearguard consisting of a detachment of the Södra Skånska Horse near Ruhlow. In this action, the Swedes lost about 85 men (Kessel gives on 43 men) and the Prussians 20 men. On August 20, about 900 men of the regiment took part in a combat near Neubrandenburg. On September 9, Belling Hussars ambushed the vanguard of Hessenstein's Corps in the woods near Jatzke. They charged the Swedish cavalry forming the vanguard from three sides: 3 sqns charged on each flank while 4 sqns charged frontally. Hessenstein's Corps consisted of 4 bns and 2 cavalry rgts. His vanguard was defeated. In this action, the Prussian hussars lost 3 men killed, 11 wounded and 22 taken prisoners while the Swedes lost 4 officers and about 50 men. On September 17, the 1st and 2nd battalion took part in the Combat of Kosabroma. On September 18, the 1st battalion fought in the Combat of Rothemühl-Neuensund. On September 22, a Swedish detachment stumbled on a post occupied by 800 men of Belling Hussars at Taschenberg. The Swedes didn't close up and the skirmish lasted about 2 hours. In the night of December 11, Belling attacked the Swedish posts at Volksdorf on the right bank of the Peene. On December 16, Belling's columns advanced to Loitz and Tribsees. Near Langenfelde, one of the column unexpectedly came across a Swedish detachment under the command of General Carpelan. After a brief skirmish, Belling marched on Jarmen, where he captured 1 officer and 45 men. On December 22, the Prussian force was attacked by a Swedish corps at Malchin. The Swedes managed to penetrate into the city, forcing the Prussians to retire, pursued by Sprengtporten's Cavalry. However, Belling's Hussars pushed back the Swedish cavalry to Malchin.

By November 9 1761, the 3rd battalion (5 squadrons)) formed part of Platen's corps stationed at Pyritz in Pomerania. On November 17, Platen's corps made a junction with the corps under the command of the Prince of Württemberg. In December, this corps was sent to relieve the Siege of Colberg. On December 12, 3 squadrons fought in the Combat of Spie. Facing a superior Russian force, the Prussians finally retreated. On December 21, the 3rd battalion took part in the Engagement of Zarnglaff.

On January 2 1762, the regiment formed part of a Prussian detachment sent to prevent a Swedish relief force from reaching Malchin. However, this detachment was defeated and could not prevent the junction of Swedish forces. The regiment then took its winter-quarters in Gnoien (1st bn), Marlow (2nd bn) and Ribnitz (3rd bn). The regiment was later transferred to Saxony where it joint the army of Prince Henri. On June 26, it took part in a skirmish near Reichenbach; on July 13, in a skirmish near Ölnitz; and on July 21, in a skirmish near Auerbach. On July 29, 10 sqns of the regiment formed part of Seydlitz's Corps who quit Zwickau and advanced towards Bohemia by Geyer, Annaberg and Sebastiansberg (present-day Hora Svatého Šebestiána) almost to Prague in a vain attempt to capture and destroy Austrian magazines before the opening of the campaign. Nevertheless, during this raid Seydlitz took over 1,000 prisoners and much booty. On August 2, 10 squadrons of the regiment took part in the Combat of Teplitz. At sunrise, 5 squadrons of the regiment made themselves master of the Wachloderberg. At 4:00 AM, Benedikt Daun Cuirassiers and converged Carabiniers charged Bellings Hussars on the Wacholderberg and drove them away, allowing Austrian infantry to take position on this hill. During the afternoon, the Prussians retired to Oberleutensdorf where they remained till August 3. From August 25 to 29, the regiment occupied Eger. On October 29, it took part in the Battle of Freiberg where it was attached to Stutterheim's column. It first drove back the enemy from the Struthwald before attacking Klein-Walterdorf where it surrounded the enemy, took many prisoners and captured 1 flag. 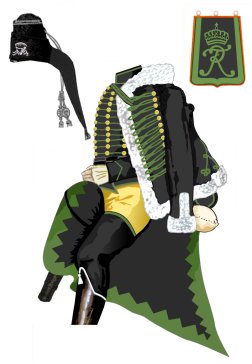 During the Seven Years' War, Prussian Hussars did not carry standards. The regiment received its first standards on September 28 1814 and on June 15 1815.

Digby Smith for the initial version of this article and Gunnar W. Bergman for the information on the adoption of the red uniforms of the disbanded Seydlitz Hussars